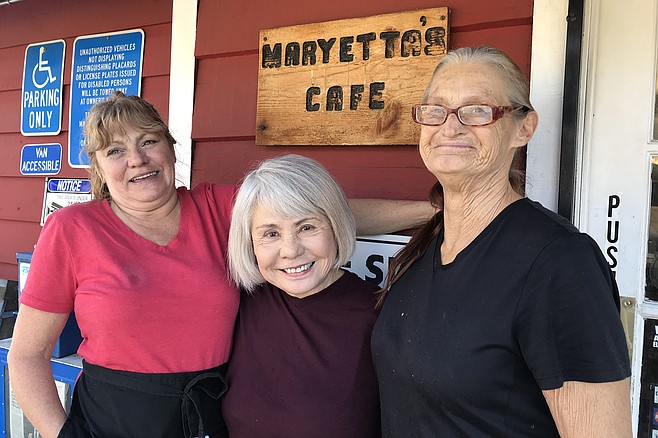 She’s famous for whacking a customer with a bar stool.

It’s a crisp, fresh morning on Olde Highway 80. I’m aboard the MTS’s 838 truck/bus heading east, looking for somewhere to break fast. “Mary Etta’s is a morning eatery,” says this lady sitting across from me. “Driver, drop him off at the red caboose.”

Which is how come I hop out onto the gravel across the road from Blossom Flinn Station, a sort of business strip with places such as a ballet school and a shop called “Blue Jeans and Bikinis,” way out here in the middle of trees, houses, rusting cars, fields, horses, and Flinn Springs County Park with its creek chuckling through.

And here’s that red caboose of the ATSF, parked back from the road, under an old windmill. ATSF? Oh yeah! Atchison, Topeka and Santa Fe railroad. People live in it, beside a 1920s schoolhouse with its roof bell, and a water tower labeled “Flinn Springs, since 1873.” 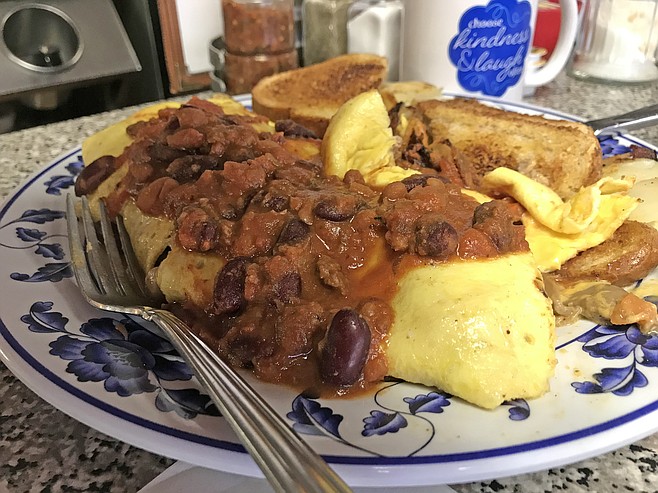 A lot of omelet, plenty of sausage.

I walk 100 yards downstream, till I get to this old red timber house made small by boulder-strewn hills that tumble right down to Los Coches creek behind. Really, you wouldn’t be surprised to see a posse of masked pistoleros galloping out from behind the rocks to hold you up.

“Can I help you?” Lady looks a bit suspicious.

Guess I was staring too much. She turns out to be Sue, one of the servers here at Mary Etta’s Cafe.

I follow Sue inside. Two racks of stools line two counters, a few black booths line the front wall. They’re all filled, and full of folks chatting between chews. You expect to hear John-Boy or Grandpa Walton in the group.

The cafe, turns out, has been going 70 years, with buildings dating back way before 1873. Not that everybody wants to take all this too seriously.

“We reserve the right to serve refuse to anyone,” says the cook, John, by way of welcome. Takes a moment. Oh yeah, great line!

“What’s your most popular dish?” I ask.

“Well, this chicken fried steak is real popular,” he says, pointing to a sign on the wall. “And our burgers. Patties are hand-made. Nothing frozen.” 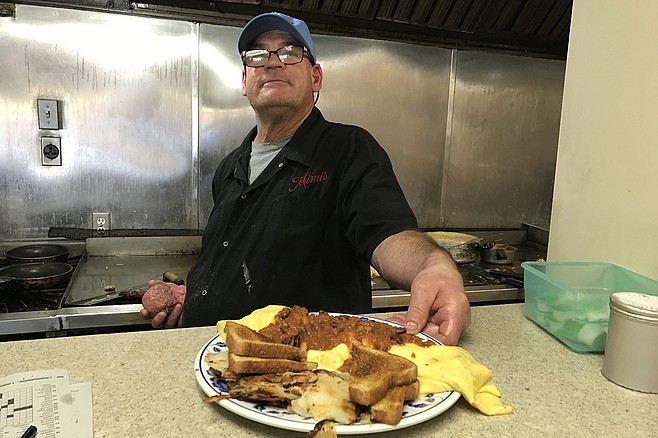 John with my Biggie.

Turns out John has been at this trade a while. “Forty years. I’m from New Jersey. I used to be at the Melrose in Philadelphia. Most famous diner in Philly. Some say the world. We’d serve maybe 3000 covers a day. But I’m so happy here.”

I see we’re talking about 12 bucks for the chicken fried steak. And most dishes are from $9 to $12. And seems everything comes from John’s wide flat top grill, filled with steaming dishes he assembles right here.

For instance, here’s a bunch of burgers, starting at $7.75 (for the beef burger or sausage burger), with most around $8.75 (including fries or home fries and lettuce, tomatoes, onions and pickles). Or $10 will buy you a chicken fried steak cheeseburger.

Right now John’s dipping into a large bubbling pot of white, thick, chicken-fried-steak gravy. “We make it here,” he says. “Whole milk, sausage, flour roux, onion, garlic, butter, other stuff. I shouldn’t be telling you. This is a 70-year-old recipe.”

Hmm. Chicken fried steak. I almost do go for that. But the other dish John’s plugging is “The Small Boy.” Costs $10. Has pretty much the same ingredients as The Biggie, $12. Like, an omelet with ham or sausage and onion, tomato, pepper, mushrooms and cheese, with chili or Spanish sauce. “Small Boy’s a little smaller, but comes with country fries and toast. Believe me, it’s plenty.”

But, no. Have to see how big The Biggie’s gonna be. I order it.

John cracks egg after egg into a bowl, whips them, adds stuff, and slurps it over the flat top. When he serves it up, it comes with the omelet hanging way over both ends of the blue and white plate. 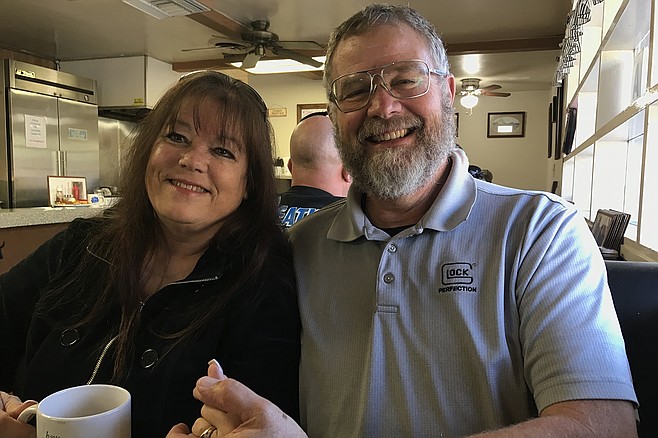 Oh, man. A ton of eggs. Large chunks of sausage oozing out, plus onion, tomato, pepper, mushrooms, and cheese. Best thing: chili slopped over the top. And when I’m talking too much and things start to cool, John comes over and ladles out more hot chili.

Next best thing: their home-made salsa — ton of flavor, plenty of heat.

Everybody talks. John, Renee (the other server,) David, and Bonnie. He’s an ex-cop from El Cajon who now sells Glock guns, but nothing threatening about him. “I always get the same thing,” he says. “I’m in love with the sausage omelet. I’ve been eating here since the late 1980s, and my dad before that, back when it was Ruby’s.”

His wife Bonnie’s attacking the same ham and cheese omelet she always does.

This is when Sue — Sueko — comes in, laden with paper towels and other supplies. She looks too young, but says she has had Etta’s Cafe 31 years. She is Japanese-American. Used to own four bars around North Park. Is famous for whacking a customer with a bar stool. “He didn’t like that I was Japanese. Tried to knock me out with his fist.”

Wow. This is one tough little woman.

Thing I like best about my omelet? The potatoes, the country fries. John does them in thin slices, not chunks, then lets them sit and get crispish on the flat top.

Next time, gotta try the chicken fried steak. But actually, just come, and let the ghosts of Flinn Springs swirl around you. Food’s gonna take care of itself.