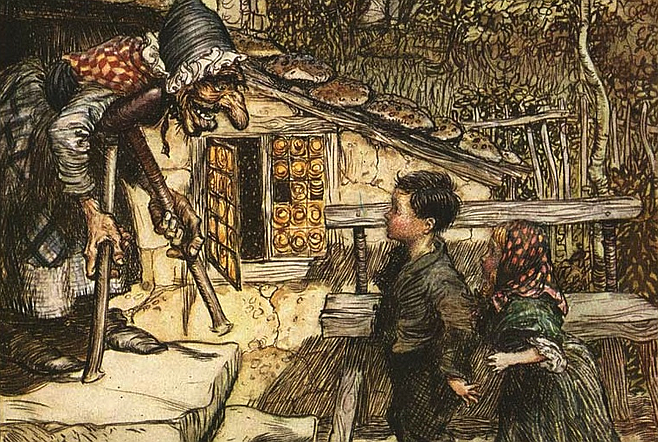 Hansel and Gretel is a story based on hunger. The opera version of this tale of the tummy is being produced by San Diego Opera at the San Diego Civic Theater on February 8 - 16.

When Hansel breaks a jug of milk it’s a big deal and the mother sends the children out into the haunted forest to hunt for strawberries. In the meantime, the father comes home having made a good amount of money selling brooms in a nearby town which was in need of a good cleaning—apparently. He is loaded down with food and upon finding out that the children are in the haunted forest he and the mother go to find them.

The story continues and there’s is some glorious music but the final line of the show is the father saying, “When the need is greatest, God the Lord puts out his hand.” That sounds nice but I’m not sure about that moral for the story.

It seems to me that the selling of brooms by the father was the deciding factor for food. I suppose that could, in a roundabout way, be attributed to God the Lord.

Hansel and Gretel does remind us that food has been scarce for the vast majority of human history. Just 100 years ago developed countries such as The United States and those of Western Europe were still “food insecure.”

More recently it has been African countries that have been documented as food insecure. However, in the past 20 years world hunger has almost been eradicated. There are now far more overweight people than starving people. Having large numbers of overweight humans might not be ideal but it beats sending the children out into the haunted forest looking for strawberries.

How has world hunger almost been eradicated? In so many words, more fathers have been allowed to sell more brooms just like the father in Hansel and Gretel. As developing countries have been given access to technology and had the freedom to monetize their time and talent, hunger has receded. This phenomenon has been documented by Harvard professor Steven Pinker in his book entitled Enlightenment Now

If we take away hunger, there is no Hansel and Gretel story. We could have a different story. Instead of looking for food, Hansel and Gretel would be sent into the forest to get in their 10,000 steps for the day.