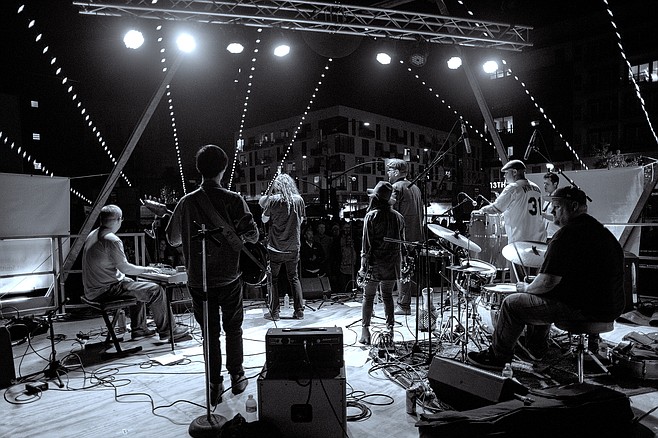 Bridges built with the Sure Fire Soul Ensemble

“It’s a mixture of funk, soul, jazz, and Afrobeat.”

“The album dropped on September 12,” says Sure Fire Soul Ensemble bandleader Tim Felten. “And it hit #1 on the Contemporary Jazz charts.... It’s awesome to be recognized at that level, and I’m super confident about what we’re doing.”

How long did it take the band to create the new album?

“It actually took quite a while, because we had two band members leave during the process,” says Felten. “After they left, we decided to scrap what we had done and just start over from scratch.”

The album is called Build Bridges, and it features Felten on keyboards, Jesse Aduelo on sax, Nick Costa on guitar, Willie Fleming on trombone, Omar Lopez on bass, Kiko Cornejo Jr. on percussion, Bill Caballero on trumpet, and Sheryl Felten on percussion. On one track, Steve Haney guests on percussion.

How would Felten describe the music on Build Bridges?

“It’s a mixture of funk, soul, jazz, and Afrobeat. And it was great to bring in [new members] Jake and Omar to help take it to the next level. Plus, each time I make a new record I learn new things as far as the engineering aspect of it.”

Build Bridges was recorded at Felten’s home studio. Squeezing a 9-piece band in the average home studio sounds like a challenge.“Well, we record the rhythm section tracks in the main room with the horns cutting a ‘scratch-track’ in a separate room. Then we overdub the horns later.”

The Sure Fire Soul Ensemble cut the record for an out-of-state label. “We’ve been working with this Ohio-based label called Colemine Records for five or six years now,” Felten relates. “We’ve done all three of our albums with them. They have really good distribution — so people can pick up the record anywhere in town that sells music, and of course it’s available through streaming services.”

Ordinarily, a band with a #1 record would be following up with a tour. Felten and his wife have different plans.

“We had a great CD release show that sold out the Casbah. But we’re first time parents, so we’re going to put everything on hold while we figure things out.”

The Sure Fire Soul Ensemble will continue to appear every other Sunday at Panama 66 in Balboa Park with subs for Felten. The whole band reconvenes February 29 at Winstons in OB.