Pentagon audit: “Ship will not be able to conduct gunnery support”

An audit by the Pentagon's Office of Inspector General has concluded that the Navy's Arleigh-Burke class of destroyers, including two San Diego-based warships, has been unprepared for battle due in part to repeated training lapses between 2013 and 2018. 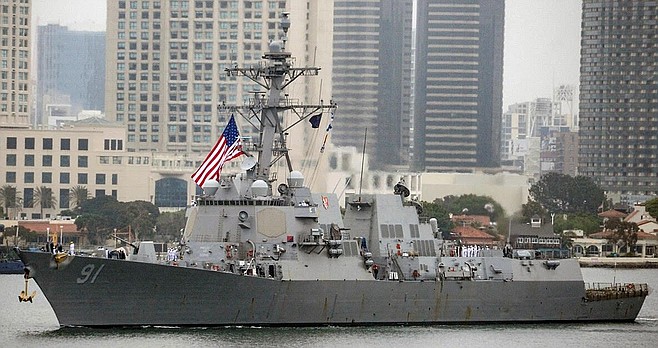 The Pinckney gained notoriety from an incident involving a sailor charged with making off with 20 hand grenades.

Two San Diego-based Arleigh-Burke class vessels, the USS Howard and the USS Pinckney, were included in the auditor's review sample.

Of ten incidents involving Navy surface ships between May 2012 and November 2017, the heavily redacted report says, "4 involved an Arleigh Burke-class destroyer and resulted in the deaths of 17 U.S. sailors, multiple injuries to individuals aboard the ships, and damage to the ships and their equipment." 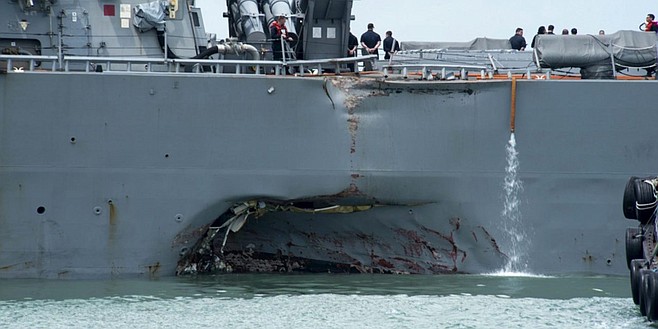 "For example, on August 21, 2017, the Arleigh Burke-class destroyer USS John S. McCain and the commercial tanker Alnic MC collided outside the Straits of Malacca (Singapore). As a result of the collision, 10 sailors died, 48 sailors were injured, and the USS John S. McCain sustained significant hull damage.

"According to the Navy's investigation, the cause of the collision was the combined result of the crew's lack of knowledge on steering control, seamanship and navigation failures, and poor leadership and culture," the audit says.

"The Navy's investigation did not explain why the problems and deficiencies, including poor leadership and culture, were not addressed before the collision. Instead, the investigation stated that the collisions, along with other incidents, indicated a need for the Navy to perform a review with a wider scope to determine systemic causes."

A review of the incidents came up with 117 recommendations, many of which were subsequently ignored by commanders, some on a San Diego-based vessel, the document says.

"For example, the USS Howard did not complete all Strike Warfare mission area exercises, such as those for Naval Surface Fire Support before deployment; therefore, the ship will not be able to conduct gunnery support, such as identifying where the ship is shooting," per the report.

The paragraph that follows in the public version of the audit is redacted.

Auditors said that the response to the report by the Pacific Fleet's deputy commander satisfied them that progress was being made, but further action was needed.

"We will close these recommendations after the Deputy Commander provides the methodology and supporting documentation used, including ships assessed and applicable certifications, to conclude that all Arleigh Burke-class destroyers currently deployed or in the sustainment phase are fully certified."

The Pinckney gained notoriety from an April 2018 incident involving a sailor taken into custody by the Naval Criminal Investigative Service and charged with making off with 20 hand grenades from the ship’s armory.

Doesn't this just make you feel so assured that the Navy is on the job and on the ball? Those ships cost $ millions to buy and $ millions to staff. And yet those two destroyers, and the rest of the class, cannot be counted on to fulfill their missions due to shortcomings in training. Then I fail to follow the statements in the report referring to the "Deputy Commander." Isn't the Commander of the fleet in charge? Or is the Navy now into delegation of responsibility? It's pathetic to have such a report say that an entire class of ships is unprepared for battle. That's what they are for, folks, and nothing more or less.

just gives you a warm and fuzzy feeling knowing that we have the latest and greatest ships and don't have the trained crew to operate them.

Wow $700,000,000,000 in funding for the military and it still isn't combat ready... You would think they could at least throw together a training exercise.