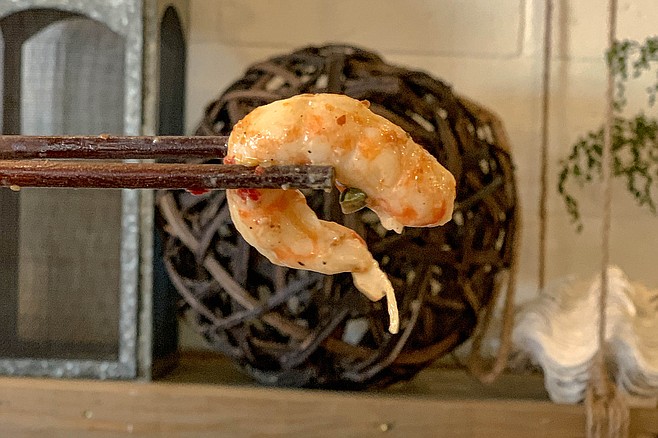 It’s not shrimp at Purple Mint

There’s a controversial ingredient on my rice noodles: cilantro. Most of us love the citrusy, parsley-like herb, which grows from coriander seeds. About ten percent of us think it tastes like soap.

I’m firmly entrenched in the majority here; I love it in guacamole, and I enjoy it on these noodles, to be honest. But I can empathize with those who have to request “no cilantro” damn near every time they order a taco. Because I’m with the minority when it comes to another questionable ingredient: shrimp. 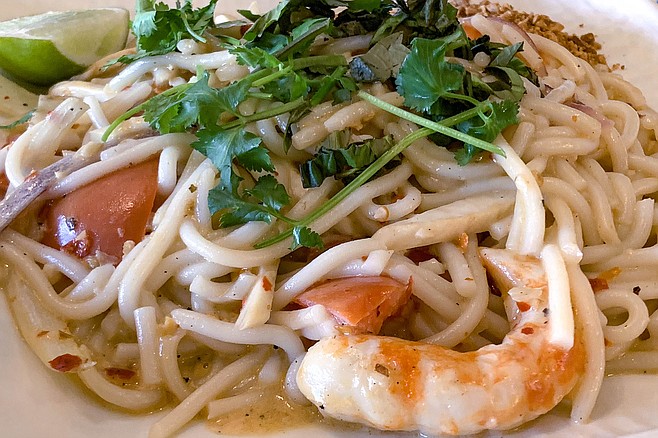 With shrimp, perspectives very widely. To some of us it’s just gross — why would you want to eat a bottom feeder? For others, it’s literally deadly — about two percent are to some degree allergic. But most of the world seems to think it’s the greatest thing that ever shared a bowl with grits. To those of us who can’t or won’t eat it, everyone else always sounds like the guy from Forest Gump who only ever talks about different ways to prepare shrimp.

In a stir-fry of rice noodles with coconut, kaffir lime, garlic, and lemongrass for example. When a white and salmon colored curl of shrimp rolls out from under my rice noodles, it scares me for a moment. In most places, the sight of a shrimp on my plate would signal the end of my meal, and possible a doctor’s visit. Fortunately, I’m at Purple Mint Kitchen where everything on the menu is vegan, even the “prawns” in this noodle dish. Though they’re shaped and colored to resemble the scavenging crustacean, they’re made from a base of Japanese sweet potatoes. 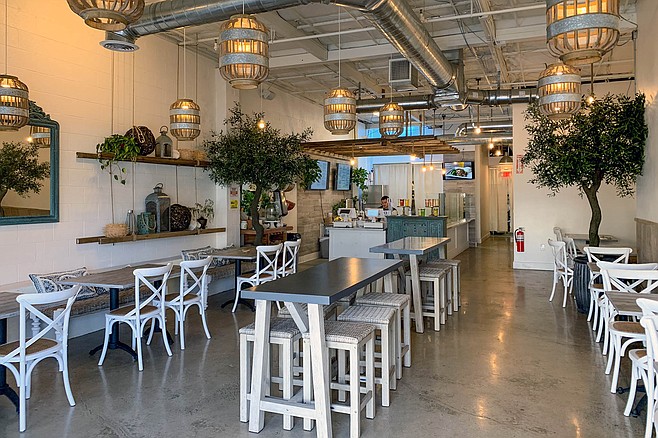 I won’t pretend they taste like shrimp, or that I really know what shrimp tastes like. But the noodles, which also feature mushrooms tomatoes, and onions, are outstanding.

This doesn’t surprise me, because everything I’ve tried at Purple Mint Bistro has been outstanding. The Grantville restaurant expanded a few months ago, here to Linda Vista, and most of its menu came along, including popular favorites of the combo fried rice, orange chicken, and a litany of teas given texture with the addition gelatinous basil seeds. 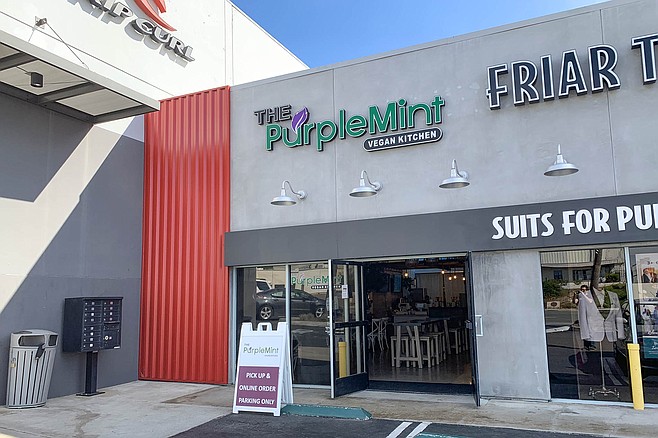 However, while the original Purple Mint is a full-service, sit-down restaurant, Purple Mint Kitchen is smaller, set up behind a fast-casual model. You order at the counter, instead of at your seat. There are a couple of new dishes exclusive to this location, including a crispy fried “calamari,” and lemongrass “chicken” tacos.

I prefer the phony beef to the phony shrimp here, but I almost can’t help myself. The sight of anything resembling shrimp in my chopsticks gives me a momentary daredevil thrill. Thanks to vegan ingenuity, I get to try all these shrimp-centric dishes, free of worry.

As for the never-cilantro crowd, relax. It’s easy to order theses prawns and noodles without it.