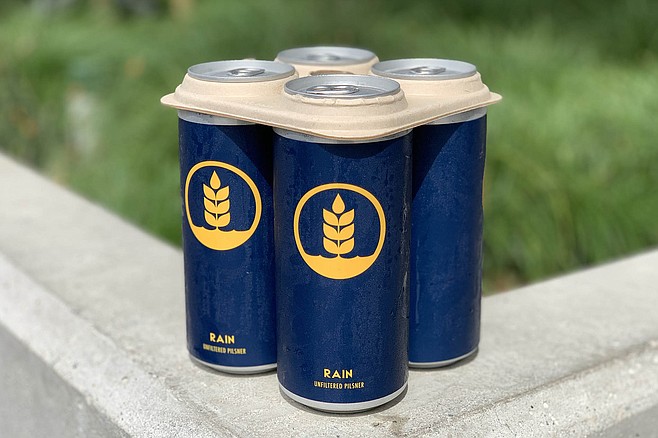 Since Pure Project launched in early 2016, a significant part of its impact on local craft beer has been seen in its canned special release beers. Fans routinely line up for these limited batch releases, which most often include hazy IPAs (which the Miramar-based brewer prefers to call murky). While releasing hazy pale ales in this manner is hardly unique to Pure Project, the way they’ve packaged their four-packs has been. Rather, the way they haven’t.

Pure Project at the Park

The proliferation of canned beer in the craft beer world has coincided with the proliferation of hard plastic pack holders. The plastic cap holders are a step up from the flimsy six-pack rings of yore in that they are often made from recycled materials, may be reused and recycled themselves and don’t wind up strangling ocean animals. However, they’re still plastic, and as recent reports have shown, fewer than ten percent of plastic materials successfully make it through the recycling system; the rest winds up in landfills forever.

So when Pure Project sells these cans, it foregoes the plastic pack holders altogether. Instead, customers are asked to bring their own packaging. “Several years ago we asked our fans to just bring a bag or cooler, or reuse their old snap packs and cases,” says Pure Project cofounder Mat Robar. The notion was confusing to some at first, but “After about two releases,” Robar adds, “everyone had caught on and were on board to help us reduce the unnecessary waste.”

For customers who didn’t get the memo, the brewery sells reusable bags, at cost, to carry their cans home. But most show up prepared with alternatives: usually along the lines of paper grocery bags, backpacks, and large purses; though Robar recalls one customer collecting cans with a fishing net.

The policy reflects a broader, environmentally savvy mission by Pure Project, which sources sustainably grown grains, as well as local and organic fruit for its beers, and donates one percent of sales revenue to environmental nonprofits including The Conservation Alliance, San Diego Coastkeeper, and Surfrider Foundation.

However, Pure Project has been growing. It’s more than tripled production since its first year in business, recently opened an urban neighborhood tasting room in Bankers Hill (2865 Fifth Avenue, Bankers Hill), and has another on the way in Carlsbad Village in 2020 (2825 State Street, Carlsbad). More to the point, it’s stepping up retail distribution, which means selling cans outside its tasting rooms. Which means they had to come back to the packaging question.

However, this time there are plastic alternative available. Pure Project has become one of the first San Diego breweries to embrace compostable and biodegradable pack holders. The stiff cardboard-looking rings are made from brewing byproducts, and said to be harmless to wildlife. While the rings will be seen on distributed Pure Project core beers, customers will still need to bring your own packaging for limited edition releases, because, as Robar points out, “No waste is still better than biodegradable waste when possible.”

Pure Project isn’t the only local brewery to embrace a non-plastic packaging solution. Vista startup Helia Brewing Co., made the switch from plastic to biodegradable pack holders in August. It’s only a matter of time before others follow suit.