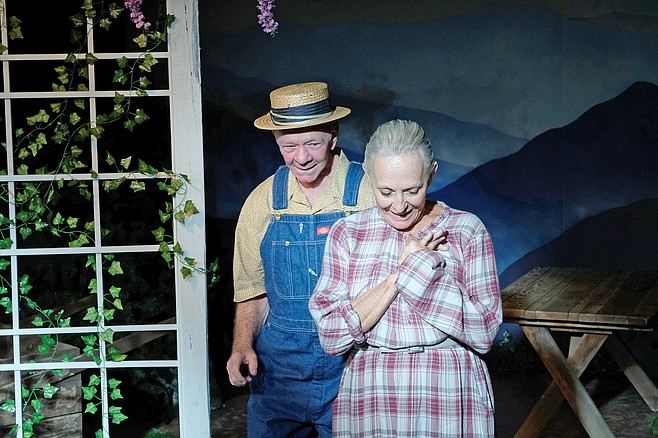 Not a musical, a play with music

The title, Foxfire, refers to a project started in 1966 by an English teacher in Appalachia who encouraged his students to hone their writing skills by documenting their family histories and Appalachian lore. They christened the project “Foxfire” after the glowing fungus that clings to trees in the local hills (as in, the old wood of these hills still has fire and light within).

Foxfire inspired Hume Cronyn to write this play, in which the choice to be faced is between “home” and “family”— a choice Annie and husband Hector never could have imagined in all the years they toiled to make a family home in the Appalachians of Georgia.

It’s worth reflecting on how foreign that choice has become in the few decades between now and when this story occurs (1982). Annie and Hector are hold-outs from an earlier, simpler life: I wonder if there are any hold-outs left today. One of the beauties of this story is that it communicates the profound losses incurred by a family no longer tied to their land — and therefore no longer tied to much of anything, including each other.

The play itself is a simple, well-told story, alternately funny and poignant. The characters are likeable and believable. Annie lives alone in a wood cabin without phone, plumbing, or electricity. Her children have flown the coop, unable to cope with the harshness of the farming life or of their father’s discipline. Dillard, the youngest child, still visits sometimes. He’s busy, though, having mined his childhood experience into a lucrative career as a “hillbilly” musician.

Holly, a homegrown girl who’s returned home to teach, visits Annie often, thereby serving as a foil to Dillard. While he couldn’t wait to get out, she couldn’t wait to get back. As the conflict between their worldviews escalates, she accuses him of turning all that is genuine, human, and cherished about their rural life into a shtick for a buck. The accusation stings: It turns out Dillard is in the midst of his own crisis and is questioning some of his life choices.

There are a number of flashbacks in the play. They are not done by younger actors, so you see septuagenarians Annie and Hector playing young sweethearts and soon-to-be parents, and grown-up Dillard playing a rebellious teen. The flashbacks are the sweeter for it.

Dagmar Krause Fields became Annie on stage, and her performance was seamless. Jim Chovick was suitably earthy and curmudgeonly as Hector, with flawless comic timing.

There is Appalachian/bluegrass music throughout, but this is not a musical. It is a play with music.

This production is family-friendly. Scripps Ranch Theatre is a small, community theater, and the audience was vocal, gregarious, and fully engaged. This is their theater, and they love it. It made the experience that much more enjoyable.