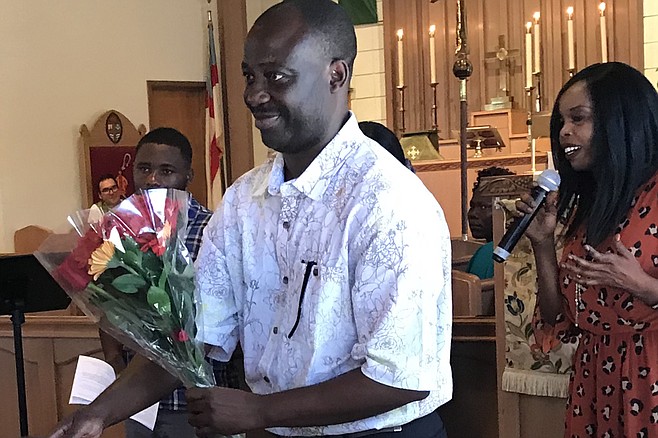 “That, my brothers and sisters, is the work of the Body of Christ in the world.”

“Today,” the reverend says, “we welcome Constantin among us.”

There’s a silence. I can see it’s affecting everybody.

“He has been paroled, after 21 months in detention. Thanks be to God.”

And now the hall erupts into claps and cheers, and tears. And laughter. And “Whooo-ooh!”

Rev. Mathewson turns to this solid, smiling, reticent man from the Democratic Republic of Congo who is walking out from the congregation to join him. “You can tell that we were hoping that you got here,” says Mathewson.

That’s the understatement of the day. Here, in this North Park church Mary has brought me to this Sunday morning, he starts relating the saga of Constantin Bakala’s journey, from Congo to Brazil and on up to here. “The family had not eaten for six days in the Darien Gap... and off the coast of Costa Rica, a police boat thought they were drug smugglers, shot the boat, killing two, then rammed the boat, and only when they heard children screaming, stopped and realized they had made a mistake.”

Constantin escaped Congo with his family after being condemned and tortured for supporting democratic causes. 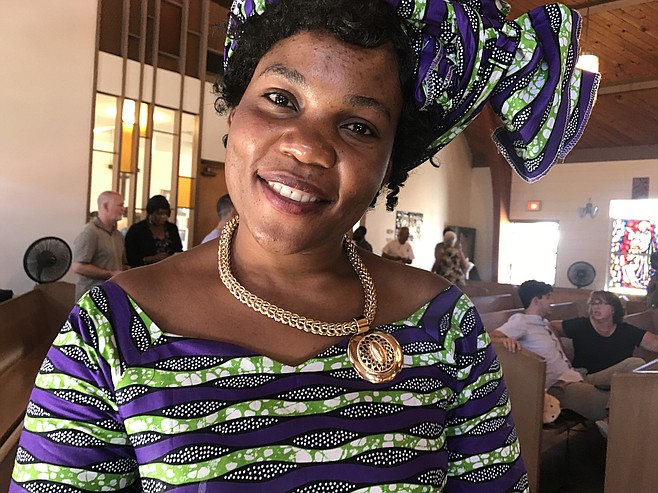 Matrida Boazi, also from the Democratic Republic of Congo, came to Welcome Constantin with Congolese hymns

Miraculously he, his wife Annie Bwetu Kapongo, and all his seven children survived the journey. As they finally approached the San Ysidro border, Constantin said he knew they would need the help of a church. The ancient customs of asking for asylum no longer seem to hold the same moral weight here, under pressure of numbers.

And indeed, within moments of asking for asylum, Constantin was separated from his family and sent off to the east coast for two years of detention, without knowing what had become of the others. What Constantin did not know was that St Luke’s, one of the poorer of the 45 Episcopalian congregations in San Diego, had adopted the family while they waited to find out where their father was, while Mathewson, his preacher wife Laurel, and their many helpers, tried to pressure the U.S. government to reunite him with his family.

“We have been instrumental in creating and sustaining a national network to support Constantin’s legal travails,” says the Reverend, “which at last check included 30 volunteers, over five states, eight lawyers, 23 articles in the media, inquiries from three congressional offices, a demonstration outside ICE headquarters downtown, and a social media campaign that resulted in uncounted calls and emails to ICE. That, my brothers and sisters, is the work of the Body of Christ in the world.”

A roar of approval rings out.

And, after the miracle of saving Constantin from certain deportation without his family, and almost certain death back in Congo, the question remains: what of all the other Constantins, who don’t have a St. Luke’s to speak up for them?

Constantin heads to a battery of TV cameras, to be asked how he feels. My friend Mary, who teaches English to Congolese immigrants, wipes at the tracks shining down her cheeks.