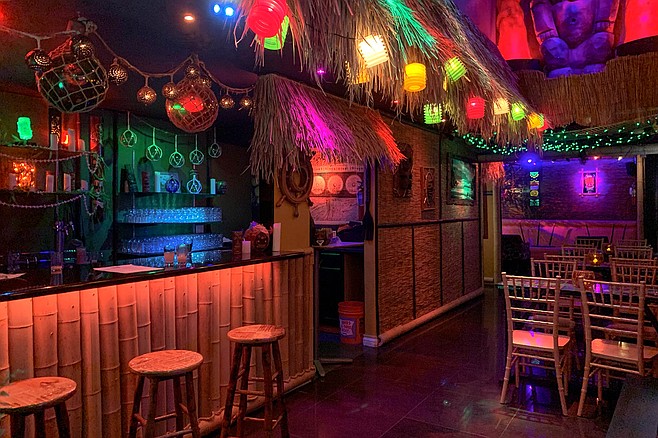 To access Forbidden Cove, you’ll need a carved wooden idol that unlocks a secret doorway leading into a narrow hallway where your own mirror reflection echoes before and behind you into infinity.

It’s a simple trick of card key technology, mirrors, and light, but it’s an effective introduction to the uncanny experience awaiting within the tiki bar styled speakeasy installed by Kilowatt Brewing, in the suite next door to its Kearny Mesa brewery and taproom. There used to be private karaoke rooms over there, and after Kilowatt took over the suite last year to expand its brewhouse, its owners realized there was room left over to create something interesting. 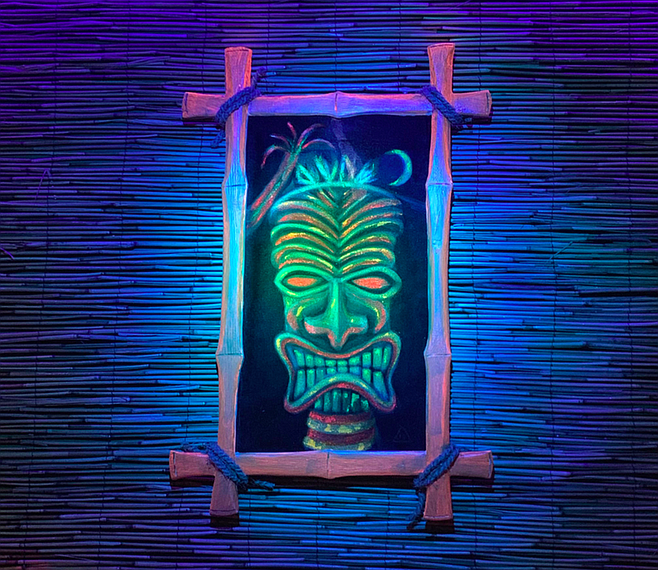 Creating something interesting is sort of in Kilowatt’s wheelhouse. Each of Kilowatt’s taprooms (including locations in downtown Oceanside and Ocean Beach) are characterized by animated bartops and distinctive lighting displays including neon colored blacklight art. Along with glass fishing floats, bamboo, and tropical plants, a lot of these elements at play in the Forbidden Cove speakeasy, such as a large glowing tiki idol above the bar area that may occasionally to life with a colorful display of fire, thunder, and lightning. However, there’s more to distinguish this tiki bar than blacklight effects.

Kilowatt is a brewery, lest we forget, and tiki bars are known for fruity cocktails. And that’s where the brewery’s new line of Zeily Hard Beverages comes into play. Kilowatt introduced the Zeily name when it began producing hard seltzers from sugar solutions earlier this year. But rather than the under-6-percent alcohol seltzers served in its regular taprooms, the brews going into the cocktails at Forbidden Cove comes out of the tank at over 18-percent alcohol by volume. 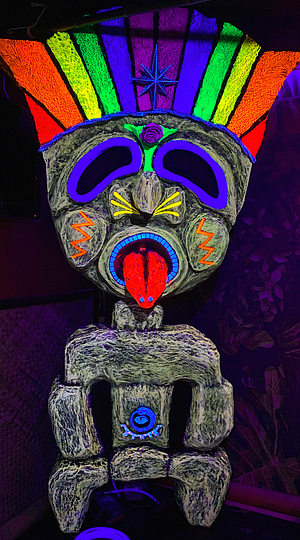 “There isn’t really a name for this category,” says Kilowatt co-founder Steve Kozyk, though he often refers to them as undistilled spirits. “It’s basically high gravity hard seltzer.” By high gravity, he means the measure of fermentable sugars in a solution before yeast starts converting it to alcohol. But that alone doesn’t explain the potency of these spirits without distillation. Most common brewers’ yeasts actually die off when they produce over 10-percent alcohol. To ferment their sugar wash to 18-percent, Kilowatt employs a super high gravity yeast capable of producing up to 25-percent alcohol by volume before dying off.

The result is a nearly flavorless, gluten free alcohol that isn’t regulated as harshly as distilled spirits, yet blends awfully well with the fruit, coconut, and spices of classic tiki cocktails. Forbidden Cove bartenders don’t mix these cocktails by hand, though; that’s done in the brewhouse. Rather, the premixed beverages pour straight from the tap, with fruit purees and all bringing the potency down to the 10- to 15-percent range, generally a little lower than analogous distilled spirit cokctails. A 10-percent drink called called Lava Flow features strawberry, banana, pineapple, black walnut, and coconut cream, while the 15-percent Lono’s Extra Delight delivers orange, pineapple, cherry, and nutmeg.

Assorted beer cocktails and Kilowatt sours are served behind the Forbidden Cove bar, and if you want a regular beer, pressing a button will notify a beertender in the taproom next door, who will be able to serve you through a secret window cut into the wall between suites.

Following a soft open phase, Forbidden Cove hosts a grand opening event Friday, November 1, during which its 35 person capacity will make it tough for curious customers to gain entry. However, reservations made through ForbiddenCoveSD.com will secure a 90-minute visit — at least for the time being. The entire block where Kilowatt Brewing operates is slated for demolition in the near future, so it’s unlikely Forbidden Cove will be open much longer than a year.

Kilowatt Brewing, on the other hand, is actively seeking a new brewing location to move into when they’re forced to relocate, which will likely be sometime early 2021.

Only been to the ob location in my stomping grounds. That spot is very cool just blocks from the beach, super friendly service and the beer is decent.

This bar looks totally cool. I could go for a fruity cocktail.

After guzzling down one of those 18 percent cocktails, you won't be able to speak easy at all!