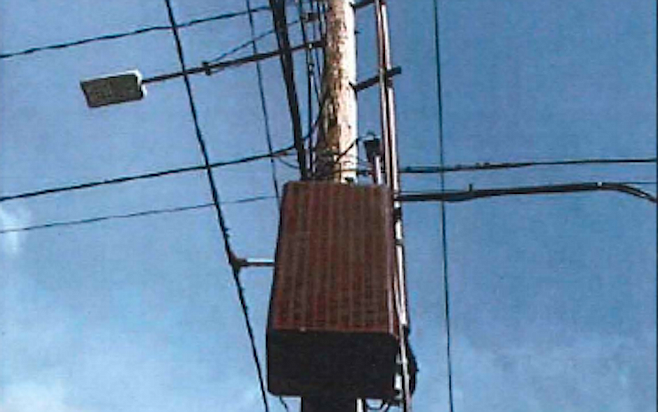 Radio frequency and the back-alley look

It's La Mesa's turn to tackle 5G, which might as well be the I-5 coming down their street, as some residents see it. To build the network, AT&T, Verizon and Crown Castle want quick and easy access to the city's streetlights and poles. Opponents say that's exactly what they got when the city passed a policy last week to guide the deployment.

"I am super concerned about property values," said resident Lisa Marie. Mayor Mark Arapostathis said he has no knowledge of that, which prompted her to suggest the city not pass a resolution "until we know how it's going to impact residents."

The shortcut to 5G is no scenic route. And the big question of where it will go is coming down to how it will look. Because it's one of few ways the city can control the placement and number of devices. The equipment, dubbed "small cells," still looks like back alley blight to many. What's new is that the massive towers and dishes, so easy to object to, are now more like an army of little bots, storming the streets, promising speed of light downloads. By offloading traffic from one server to the next, they add capacity where companies say demand is exploding; right where people live, work, play.

Many speakers voiced their fears about that close, constant proximity. The rollout will bring a blanketing of radio frequency they consider a health threat.

Sue Brinchman, director of the Center for Electrosmog Prevention, called the radio frequency a "dangerous form of air pollution." She suggested delaying a vote, holding a workshop for residents only, redoing the policy to make it more protective of residents, and considering a protective urgency ordinance, as several other California cities have done. "Don't listen to industry saying you can't consider health; you can."

The Federal Communications Commission says cities can't regulate 5G based on environmental effects from radio frequency emissions, as long as they comply with FFC's regulations. Mayor Arapostathis asked how they could check for RF compliance?

Trip May, the city's outside counsel on telecom issues, said they can require carriers to show that the facilities they plan to build comply with FCC rules. A third party engineering report would be submitted to the city, paid for by the carriers. But cities can't set the standards, he said, and "Not everybody agrees that the standards the FCC sets are appropriate."

May is now representing the League of California Cities and several other cities that have appealed the FCC "Small Cell Order" that took effect this year, which removed most local control over 5G. The case is now in the 9th Circuit Court, and a decision most likely will not be made until the end of 2020, he said. A review of RF exposure standards is also underway.

Prior to the FCC rule, companies used to work more closely with cities on their plans, May said. They had to show a significant gap in coverage for proposed facilities. Now, they've dropped that. There are shot clocks, timeframes, in which cities must act, and denial often leads to a lawsuit. Other changes, that rules must be objective and published in advance — "that's what takes away the city's zoning freedom."

Because zoning is subjective. And now, aesthetic regulations must be reasonable.

"Aesthetics are really important. Courts have recognized that the way the street looks really makes up a neighborhood."

La Mesa City Council has two choices: 1. Do nothing and let the 5G industry dictate where and how large or 2. Do what they did so that they could have some input and control. As for the NIMBY's if it were up to them we would still have no electricity and would be scooping up after horses. If radio frequencies were as bad as the NIMBY's claim we would all have brain cancer or would glow in the dark. The fear of anything new is what holds back human progress. The City Council did what they had to do and what was in the best interest of the citizens.

The ONLY human progress to anything after the time-line of horses --- in San Diego County Status/Culture --- extremely pertains to CARS; hence motor vehicles. The addiction of mass San Diego County Culture --- in worry to keep its STATUS. Maybe sometime there will be a Section 8 credibility for living within a car, so to prevent overpopulation of apartment. SDGE is lesser termiting traffic in the open society, than the motor vehicles are in the roadways. Imagine what SDGE formatted pot-holes would look in default of.

I heard that in some cities, there is such opposition that striptease clubs won't even allow their performers to wear 5G strings! ;-)

How about if such city as San Diego -- there be such opposition that businesses not allow debit cards to be used anymore; as with pasttime business attitudes.

Searching of general law to legal issues is obviously more ez, than the search for the break-down to components of a power-pole; as not ever power-pole is of the same design set-up. The un-clear search system that results for those who wish to search --- is very time/effort consuming; another element to what these utility co base their costs on?

After watching Dante Plante's later report today of his time in Julian: maybe what was the 'horse-drawn fire engine' will come back as an AID. In today's modern society, it be sporadically chosen --- trends goes backwards in time.

Anyone here in San Diego County remember (?) the (CBS NEWS 8) idol of Michael Tuck (begin of 1980s) who was their strongest in doing his 'Editorial' -- on a daily basis. HIS BIGGEST RIVAL To Criticize was of SDGE. Continuously.