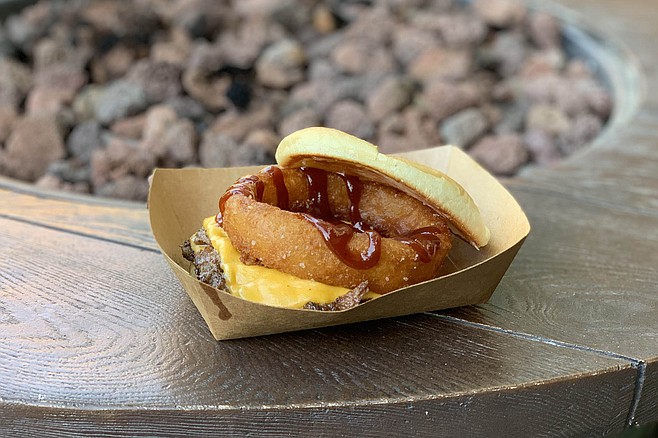 The Friendly gets friendlier

It’s not even two years since The Friendly dusted off an old pizza joint in North Park and started smashing patties for a legion of raving burger fans, but it feels like a lifetime when measured in Facebook posts. A favorite among restaurant and beer industry workers, The Friendly achieved instant cult status with its Dirty Flat Top burger, which caramelizes a pair of wafer thin beef patties and admirably goops them up on a bun with grilled onions, garlic aioli, and American cheese (and nothing else and no modifications, thank you). Sharing a photo of said burger alongside a vow of eternal devotion quickly became a rite of passage among a Greek chorus of social-networked fanboys rushing to declare it the best burger in the history of the universe.

They might be overselling it — though I suppose if you’re of a generation that grew up a targeted market for the likes of stuffed crust pizza and hard shell tacos wrapped in bean burritos, a return to the burger simplicity of a half century ago feels revolutionary. However, there’s no doubt the willfully low brow burger is appealing on a primal level. Even more than good, it’s sensational. Within a few months of its emergence, smashed burger imitators began to turn up on quite a few San Diego menus, banking on its cachet.

You’ll find this one on University Avenue, within the former home of yesteryear’s cult fave casual eatery, Carnitas Snack Shack, a location that will be plenty familiar to local burger fans (the pig sculpture remains firmly in place on the shack roof). It’s especially familiar to Friendly chef and cofounder Brandon Zanavich, who cooked here previously, and reportedly partnered with Carnitas cofounder and chef Hanis Cavin to bring the whole Friendly zeitgeist to a place with copious outdoor seating and a backyard bar. 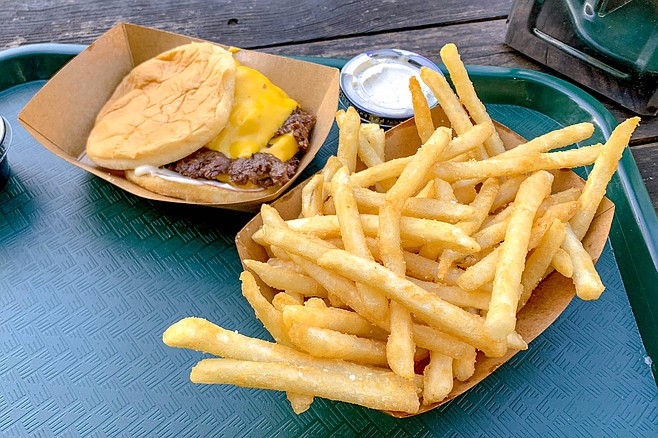 Considering two of the very best burgers I’ve eaten in San Diego were cooked in this tiny kitchen, by each of these men, respectively, I showed up expecting more than just the O.G., and found it. Unlike the original Friendly location, there’s no pizza here — it’s a dedicated burger spot. This means a few of the daily burger specials that have shown up on the 30th Street menu turn up here on a regular basis, the chalkboard menu out front registering a variety of alternative takes on the dirty flat top concept. You can strip it of onions and aioli by asking for the Meat-CHZ-Bun (also $6), or make it simpler still by ordering The Slim, which is simple meat on a bun ($5). 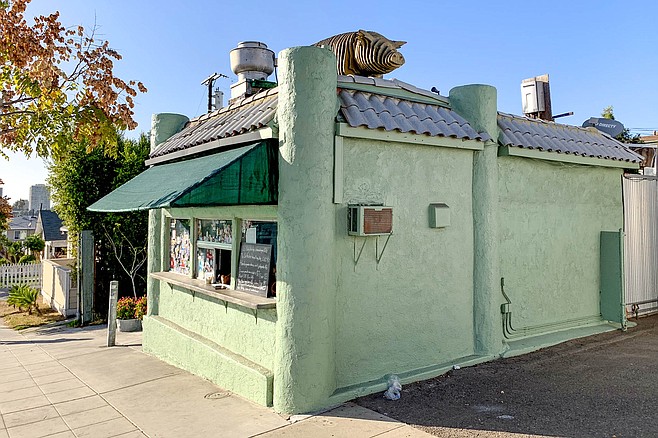 The Carnitas Snack Shack pig still tops what is now The Friendly Tavern.

Modifications are still declined, but the smash burger can be upgraded to a bacon, mushroom, and swiss burger ($7), or my favorite, The Shitkicker, which adds bacon, an onion ring, and Sweet Baby Ray’s BBQ sauce ($7).

This doesn’t preclude routine daily special offerings, either, and the thing to do is still to follow The Friendly’s Instagram feed to spot these scrumptious burgers topped with over the top goodness such as foie gras, morel mushrooms, shaved truffle, or crab croquette. And, in case you missed it, The Friendly does serve French fries these days, in the style of Jack in the Box: ultra crispy outside with almost liquified potato inside ($3).

If you still want to cram into a tiny shop to photo document the fact you were there, eating the greatest thing in burgerdom plus a slice of pizza, the original Friendly location is still there for you. But if you want to stretch out, grab a cocktail, sit around a table or fire pit large enough to fit all your friends, well, The Friendly Tavern is now there for you too. Sharing the fact with everyone you know, that’s optional.