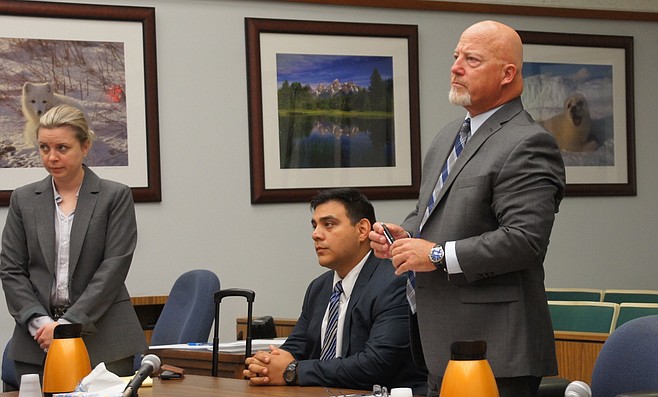 The fateful ride from Tri-City

David Alexander Carpio, 34, made a plea deal in August 2019, in which he admitted four felonies, including child rape and sexual battery on a child. The prosecutor has stated that there are actually three victims.

The prosecutor claimed that a 15-year-old girl was being transported by ambulance from Tri-City Medical Center to another treatment facility in Northern San Diego County, in February of 2017. At that time, Carpio was an EMT with the ambulance that picked her up and delivered her. The prosecutor claims that Carpio made two different “exams” of the girl during the ride. He first told the girl to remove her hospital gown, and then he made comment on her underwear and he pulled away her underwear, it is alleged. Carpio reportedly used a pen to write the word “Hi” and a smiley face above the girl’s left breast, and then he licked his thumb and used his own saliva to remove that graffiti, the prosecutor claimed.

Carpio commented on the girl’s appearance and told her that if he was her age he would find her attractive and would want to date her, the prosecutor alleged. (Carpio was 31 years old at that time.) Carpio said he wanted to meet up with her after she was out of hospital, and he would take her out to lunch. He rubbed his thumb over her lips and hugged her and kissed the side of her neck, allegedly. He asked for her social media information and gave her his phone so she could enter that information herself, according to the prosecutor. Carpio gave the girl his own info so they could connect in future. Carpio allegedly sent the child a “friend request” through Snapchat, the prosecutor has alleged.

At the end of that ambulance ride in February 2017, when the girl got to the treatment facility, she told staff there what happened and the staff contacted law enforcement.

Investigators later posed as the girl and made contact with Carpio through social media. The prosecutor claimed that Carpio did respond, and he told the girl that she was “motivation” and that she should “Help a guy out” and he asked for inappropriate photos, telling her, “Send some more you sexy….” (Defense attorneys have asserted that investigators used unlawful “entrapment.”)

It was eight months later, in October of 2017, that charges were filed for the alleged ambulance incident. David Alexander Carpio, then 32, faced five charges at his first arraignment, most were misdemeanors. Carpio paid a $4,000 fee to All-Pro Bail Bonds to guarantee his $50,000 bail and obtained his liberty.

Law enforcement then allegedly found another incident, this one reportedly happened in 2014. The prosecutor said Carpio entered the home of a 16-year-old girl who was complaining of a migraine headache. Carpio told her that he was studying to be an EMT, and instructed her to change her clothes. After she changed into shorts, he had the girl lie on the floor, and he began to squeeze and rub her legs. The “treatment” by Carpio allegedly turned into sexual abuse and when the girl tried to rise up from the floor and escape, he forcefully restrained her by strength, returning her to the floor and continuing the abuse, the prosecutor claimed.

On that August day when the plea deal was signed, prosecutor Uyar asked the judge to order Carpio be taken into custody. But over the prosecutor’s objections, judge Bowman denied the request and allowed Carpio to remain at liberty. The judge generously gave the former EMT three months to get his affairs in order, to prepare for his ten year prison sentence. The judge set a sentencing date of November 4, 2019, and the victims and their families made plans to be there to make their “victim impact statements” to the court, before sentencing was announced.

But at that hearing in November, Carpio announced that he wanted to withdraw his guilty plea, and that he was currently interviewing new attorneys. The prosecutor again asked the judge to order Carpio back into custody, declaring the defendant to be a flight risk.... Carpio further offered to wear a GPS monitor, at his own expense, in order to remain at liberty. The judge allowed Carpio to remain at liberty, with the added assurance of the SCRAM or GPS monitoring in place, which Carpio had volunteered.

At that next hearing, new defense attorney Sean Leslie told the judge that he needed time to file motions to “vacate” or withdraw Carpio’s guilty plea, and to support his contention that Carpio had “ineffective counsel.”

Judge Bowman agreed to set a new court date for January 9, 2020. The judge warned defendant Carpio that if he, the judge, denied his request to withdraw his guilty plea, sentencing would immediately go forward, on that same day.

What a sick puppy, who shouldn't be an EMT. What a terrible ordeal for these young ladies.

There's a difference between EMT & EMS.

This guy would be dead if that was my daughter.