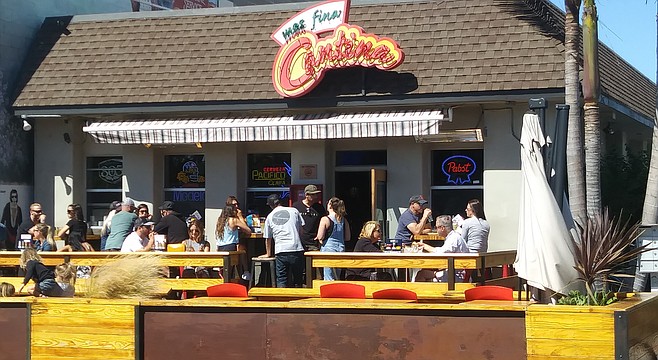 "There is nothing beautiful about these new buildings"

At least eight businesses in Carlsbad’s downtown Village area have been told they must prepare to move out as their buildings make way for a sleek new restaurant/retail complex.

In what seems to cement the notion that Carlsbad is indeed morphing into Manhattan Beach, the popular Mas Fina Cantina and the Carlsbad Village Art & Antique Mall have been told their days are numbered. Their buildings will either be bulldozed or reformatted to make wake way for an upscale retail center. Their exit date could come as soon as October 2020 but possibly may not arrive until mid 2021 based on permit approvals. 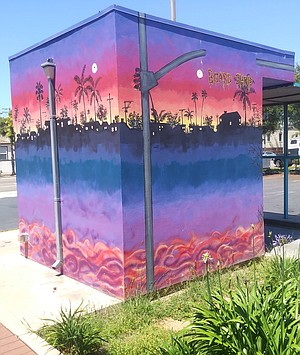 Plans circulating with drawings for a new development called State Street Commons show there are no plans to retain two automotive repair shops, two hair stylists, a yoga center, an insurance office and an apartment complex. All will be displaced by a new complex that fronts the 2700 block of State Street and backs up to Roosevelt Street. Calls to Solana Beach-based Retail Insite who generated the drawings did not return requests for comment.

“I was very unhappy when I heard the news” says Andy Davis, co-owner of the Mas Fina Cantina who says he spent months hearing from customers that his building had a date with a bulldozer. Since the 50s the Mas Fina building has been home to an appliance repair store, a laundromat, and an Italian restaurant. Mas Fina arrived in 2000. “My landlord told me: ‘We don’t have any plans, but we’ll let you know if it changes.’”

But the customers kept coming with more details. When Davis heard that the city had actually gotten involved, “I met with them and they told me they had sold the property.”

Davis says he has no animosity against his landlord or the incoming developer. “But I am worried the Village area will lose its charm as everything seems to be getting bigger and higher. I get it that this is happening. My problem is that it is moving a little too fast and all the new designs seem to be similar. It’s all big boxes. There is nothing beautiful about these new buildings. People don’t want Orange County in coastal North County.”

Davis wouldn’t get specific about Mas Fina Cantina’s future, “But you can say we will stay in the Village [at a new location].”

Calls to Karlsbad Realty and the Don Dewhurst family about the sale of the property were not returned.

Bonnie Imperiali, manager of the Carlsbad Village Art & Antique Mall, says she was unclear about specific dates when her 15,000-square-foot collectible bazaar must close or relocate. The mall hosts mini shops for some 100 individual artists and antique vendors. It has been on State Street for almost 30 years.

Jan Brownell, who works at the mall, says Carlsbad doesn’t seem to care much about its heritage. “Look at what they did in Little Italy. As they zoned in all this new development, they agreed to keep some of the classic old buildings. That’s why you will see like three classic Victorian homes from the 1800s right next to all the new stuff. They incorporated and saved the old with the new. The city identified key blocks and they saved them.”

Brownell says Carlsbad doesn’t seem to understand basics of urban planning since much of the new development has little inter-building space and new building fronts bump up too close to the street.

Carlsbad’s gentrification squeeze made a kind of folk hero out of lifelong skateboarder Cameron Wetzler, 29, who opened Elm Street Boardshop last July. Billed as “The world’s smallest skateboard shop” because of its nine- by seven-foot interior, it was south of the Bank of America on Carlsbad Village Drive (the major artery was long known as Elm Street). “I’ve worked for years at Pizza Port which was right across the street and people always told me that would be a perfect place for a skate shop. Kids were always skating around there anyway.”

He said the reasonable rent and prime location was a blessing. “It was a perfect mix for a broke young man.” Alas, it turned out to be too good to be true.

“Right after our grand opening we were told that this lady from L.A. wanted to take it over, tear down our building and an adjacent building and build a 3000-square-foot glass blowing shop called Barrio Glassworks.” He says he collected 900 signatures in three days for a petition hoping to save Elm Street Boardshop. “It was all about not having a building torn down that would destroy the uniqueness of the village. That people were tired of seeing the destruction of small businesses and old buildings that people cared about. About the arrogance of gentrification. We had to stick our dukes up.”

Wetzler had support. “We went before the planning commission. We had like 150 kids and their parents and grandparents who came out to support us. They said their kids felt safe there. The glass blowing lady had like two people speak on her behalf.”

But he says Barrio Glassworks won the war. Wetzler says his last day at the old address was Halloween. He says he was lucky to find another small space a few blocks west. “It’s been seven months and they have still not done anything there. That building is still there. When we were there we chased away all the homeless. Now the homeless have all come back.”

Wetzler says all the beach cities in North County are starting to look alike. “Everything has been changing. It’s pretty crazy to see all these cookie-cutter buildings replacing the old-school buildings. We’re losing our uniqueness.”

Meanwhile on Saturday, June 2 Mas Fina Cantina hosts its second annual afternoon Beer Fest fundraiser in its parking lot. “Last year we expected to raise $15,000 to build homes in Nicaragua,” says Davis. “We raised $20,000. This year it benefits Got Your Back San Diego which gives backpacks full of food to needy kids which they can refill.”

Carlsbad's old residential areas south of these commercial streets is changing too. Harding has several three story apartment buildings going up where there were once little beach bungalows. I can't believe they are allowing 3 story in the west of I-5 areas.