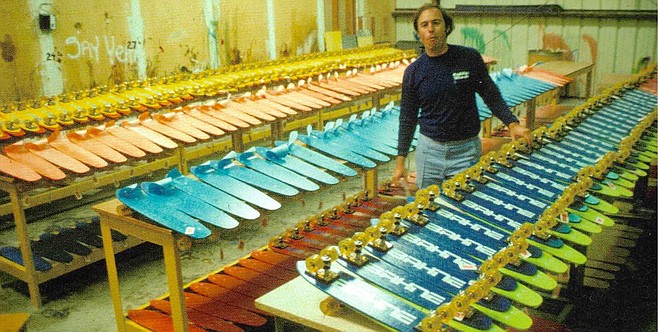 Birthplace of skateboarding – Encinitas and Carlsbad

It started in 1974 at the Bahne surfboard manufacturing shop on Westlake Drive in Encinitas, and quickly spread to a street known as Black Hill in La Costa. Within a few years, skateboarding was a multi-million dollar business with professional riders and corporate sponsors. 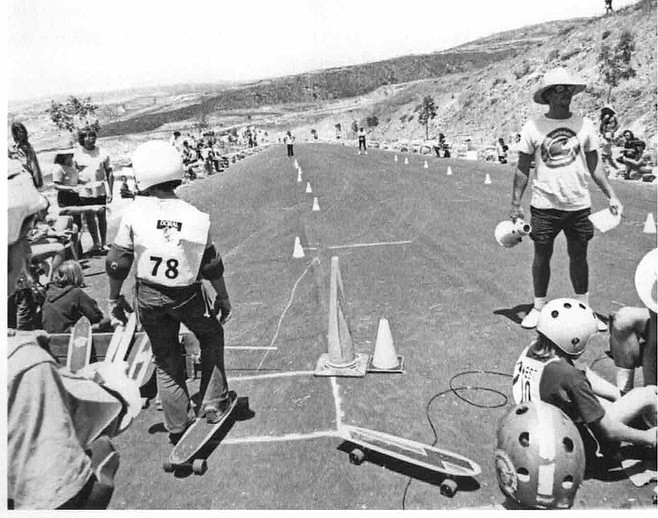 On May 1 the royalty of 70s skating came together at Encinitas’ Roxy Restaurant for the release of John O’Malley’s book, Urethane Revolution, The Birth of Skate 1975.

As a fellow skater in the mid-70s, I saw my heroes there; Bill and Bob Bahne, Ellen Berryman, Kim Cespedes, Di Dootson, Henry Hester, John Hughes, The Logan Family – Brian, Bruce, and Robin, and Greg Weaver. 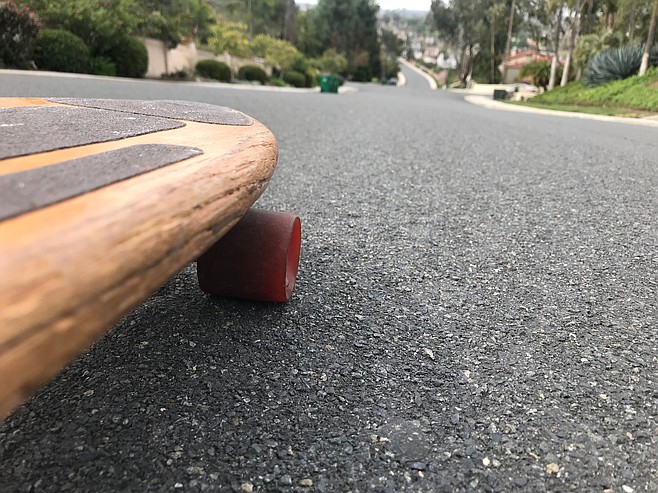 While Hollywood seemed to have proclaimed the birth of skate to be on the streets of Santa Monica with its 2001 documentary Dogtown and Z-Boys, and Sony Pictures 2005 commercial release of the same L.A. story, Lords of Dogtown, local skaters in the day knew the sport’s real origin.

“In 1973 my brother was out to lunch and happen to meet Frank Nasworthy. He [Nasworthy] had a urethane wheel that was being used by beginner roller skaters,” said Bob Bahne. (Nasworthy had brought them from his home in North Carolina) “My brother came back to the shop and told me we needed to do something with these,” said Bahne 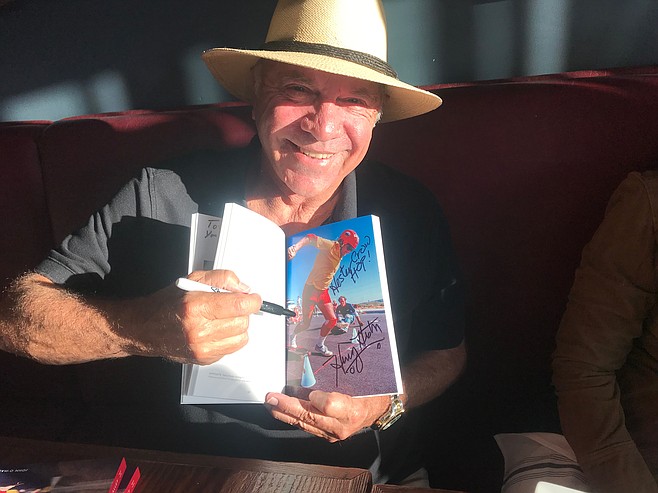 Henry Hester. Hester’s inscription in John Hughes' book, “You really were faster than me but nobody ever saw it.”

Coincidently Bahne Surfboards was working on developing a molded plastic surfboard fin that wasn’t quite working to their expectations. “We used that material, and within three days we had a molded deck,” Bahne said. Adding Nasworthy’s Cadillac wheels along with trucks from roller skates, the outgrowth from clay-wheeled, 1960s sidewalk surfing was re-born.

“Any paved surface could now be ridden,” said O’Malley. “Everyone’s first skateboard was a Bahne with Cadillac wheels,” said one book-signing attendee.

O’Malley credits the birth of skate with what he calls “the perfect storm” – a historic drought, deep financial recession which brought about pro surfing’s decline, and Teamster mob-union money building themselves a new playground known as La Costa.

Black Hill was perched high above the La Costa golf course resort, it was a perfect downhill; long, smooth pavement, straight, and undeveloped – a street that went nowhere.

As Black Hill took off, “the drought uncovered insanely fun new skating forms like reservoirs and drainage ditches while recession-vacant homes had their swimming pools drained and skated,” O’Malley wrote.

During the book gathering, old pros were asking for autographs from their fellow competitors. Famed downhiller, John Hughes, originally from Cardiff by the Sea, had held the unofficial skateboard speed record of 84 m.p.h. for decades. He was delighted to read world champion Henry Hester’s inscription in his book, “You really were faster than me but nobody ever saw it.”

O’Malley’s book deals with the 1979 worldwide collapse of skateboarding. “We’d ridden an XXL wave to the crest and were now sucking straight down the back into the pit,” he wrote.

Brisn Logan, the patriarch of the Logan Earth Ski empire, told me years ago that after the crash, he burned his worthless solid oak Logan decks in his fireplace. Today those same decks on e-Bay sell for upwards of $300. As a skateboard seller at Orange County swap meets, I ended up giving away my unwanted inventory of decks, along with top brands of trucks and wheels, to a church thrift store in Anaheim.

The skate darkness lasted for a decade. In 1983, a young Tony Hawk attending San Dieguito High School in Encinitas was picked on for being one of a very few skaters. The harassment caused him to transfer to Torrey Pines High in his junior year.

O’Malley laments that since the late 80s resurgence started, the industry has not slowed down. Skate parks are common now in communities throughout the nation.

In 2020, 15-year-old Bryce Wettstein of Encinitas will carry the torch from the birthplace of skate, as she competes with the USA Skateboarding Team in Tokyo, for the first-ever medaled skateboarding events in the Olympic Games.

On the weekend of October 25, 2019 atop Black Hill (now named El Fuerte Street) a three-day public reunion is being planned.

I think you mean Westlake Street, off of Encinitas Boulevard. There is no Westlake Drive.

You are correct, and I've only lived here almost 6 decades, long before San Marcos Road. Skyline Dr., and Woodley Road were changed to Encinitas Blvd., Lomas Santa Fe Dr., and Leucadia Blvd. I don't know my own town anymore.

Most of us don't as we travel by landmarks more than street signs.

Note even close..... I was riding my urethane wheeled Makaha in 1966 at Dictionary Hill in in Spring Valley 1966.

Now if you want to claim organized runs in 74 go ahead.

MX311 - I'm just not buying that. Unless you got those 1960s urethane wheels from a roller rink pro shop, they may have been available back then. But then that means you were in the rink rollerskating for the Lady's Choice Backwards Skate. Kinda reduces the image of a cool Dictionary Hill skate rat.

Certainly the Makaha boards were from the 60s. Tell you what I'm gonna do. I'll go to the Beach Break Cafe in O'side. They have almost every skateboard ever made from the old days, hanging on their walls. If I find a 60s version of what you said, I'll post a photo and claim you as king of Spring Valley Skate.

As I recall, we got that stuff from a shop near Balboa Park .....We mos def did Dictionary Hills on a Makaha with Urethane wheels ......

I remember my friend Larry getting into a wobble from a little more than half way up one of those monsters and both forearms were chewed up for a month.

I had a girl friend that lived in SV. I never could get down Dictionary Hill. You da man!

The decline after 1979 was probably closer to half a decade. Skateboarding bounced back in a huge way around 85/86 when the Powell Bones Brigade videos took off. A second decline probably started around 1990, and the industry really seemed to bottom out around 1992/93. If I recall correctly, it gained momentum again around 1996 as the era of the X-Games started to take hold, and by 2000 the industry seemed to be booming again. Since then, skateboarding has seemed pretty bulletproof. It feels like something that will always be around. These days, it's more akin to bikes than hula hoops.

You're last line says it all. Your time line is probably correct. I was just quoting the author of the book's reminisces.