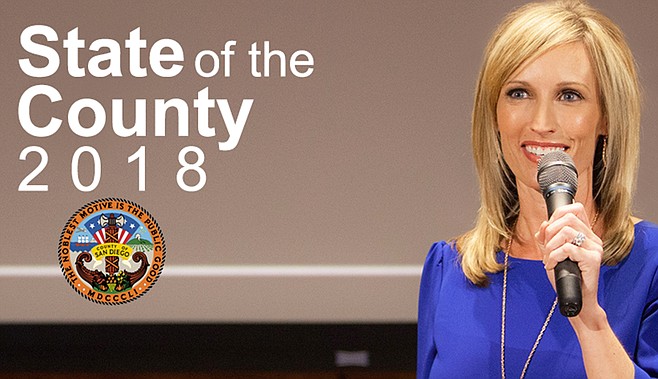 The County Board of Supervisors campaign gloves were formally taken off on May 9 when the Rancho Santa Fe Democratic Club hosted the expected three challengers to Supervisor Kristin Gaspar’s 3rd District supervisorial seat. Gasper, former mayor of Encinitas, has risen to be a top Republican in county politics.

Six months before the deadline to file a run in the March 2020 primary election and 18 months before the general election, the three challengers agreed on one thing; beating Gasper. That, and hating President Trump.

“We know she’ll [Gaspar] outspend us by a million dollars,” said three-term Escondido councilwoman Olga Diaz, as she asked the audience to make a decision that evening, as to which Democrat they’ll get behind.

Based on audience response to the initial ten-minute speeches, Diaz appears to be the front-runner. Perhaps better known than the other two candidates for her 2010 ousting of good ol’ boys on the Escondido council, she is the first Latina ever elected to the council. She is quoted in media on immigrant rights issues.

Turning the 3rd Supervisorial District blue was the battle cry from the three candidates. Republicans have traditionally held the five seats on the County Board of Supervisors until Democrat Nathan Fletcher got elected in 2018.

Terra Lawson-Remer, an Obama administration advisor in the Treasury Department, is now a public policy professor at UCSD. She touted her community activism and organizing Flip the 49th, credited with getting Democrat Mike Levin elected to the 49th Congressional seat held by Republican Darrell Issa.

Lawson-Remer’s pamphlet boldly printed her name and the words “County Supervisor.” Missing were the expected words “Elect,” or “Vote for” as if she’s assuming an incumbent’s status.

Although Lawson-Remer has credentials, she may not attract middle-of-the-road voters. The political website Keywiki's entry on her cites her role as "founder and managing partner" of the Freedom Road Socialist Organization-aligned Catalyst Project and her refusal to disavow the involvement of Communist Party USA in what is billed as the "April 20th Mobilization” to "Stop the War.”

Jeff Griffith – "I had fun tonight"

Riverside County fire captain and an elected member on the Palomar Health board of directors Jeff Griffith admits he got into the race a little late. His message focused on public safety and health care.

“The others hit the ground running,” he explained for his lack of slick campaign literature. “I had fun tonight, I hope others did,” he said after the presentations.

As for Supervisor Gaspar, she announced on May 3 her intention of running for a second term.

The 3rd Supervisorial District runs along the coast, from Leucadia south to Hwy.52, heads east along the 52 to Terrasanta, north along the I-15 corridor to Escondido. Recent voter registrations rolls indicate the district is split at 33 percent each between Republicans, Democrats, and independent voters.

You are correct. I had forgotten about him, although I personally think he represented all of the 3rd district well, no matter what party he affiliated with.

I would agree in general, at least for his first two years. But $310,000 in taxpayer money to settle claims against him militates against a positive judgment of history. How much of this was concocted, and how much of it self-inflicted, à la Filner, I suppose we'll never know.

Most were from Solana Beach, Del Mar area.