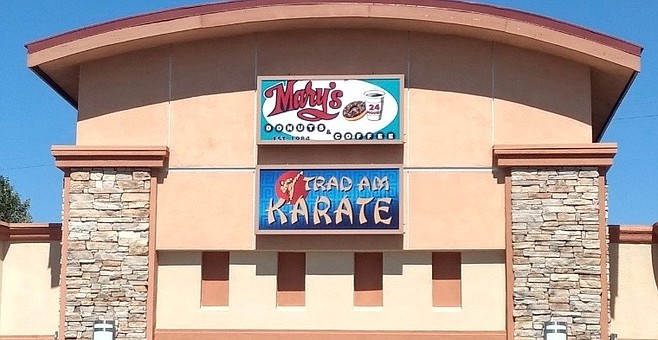 Mary's Donuts in Santee got a little too generous

Joel Scalzitti uses her name in Lakeside and El Cajon

Touted as a third location of the regionally popular Mary’s Donuts, a new storefront opened on El Cajon’s Main Street on April 13, near city and county offices. Owner Joel Scalzitti proclaimed in the East County Californian, of his new donut and deli shop, “I want people to feel like they’re coming into their home.” 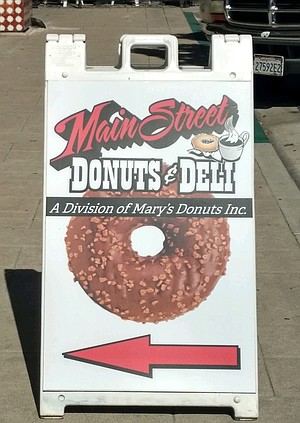 Scalzitti’s new “home,” named Main Street Donuts and Deli, may soon be a place of harsh words and legal haggling. The restaurant claims on signage “A Division of Mary’s Donuts, Inc.” and news reports claimed it to be directly affiliated with Santee’s original Mary’s Donuts. The store’s type style on its Main Street sign is the same style as the Santee Mary’s Donuts sign.

“The El Cajon shop is not a third Mary’s,” said an employee of Mary’s Donuts.

In 2017, Scalzitti, a long time customer of the Mary’s in Santee, asked if he could open a location in Lakeside, under the same name. Known for her community generosity and welcoming style, owner Mary Hennessy said okay, thinking she was helping out a longtime good customer.

“Lakeside is not related to us,” said the Santee Mary’s employee. “We get complaints about them all the time,” she said. “People tell us it’s not the same. We have to apologize saying they’re not related to us.”

The real Mary – Mary Hennessy, is 90 years old. “She shows up every morning at 4:30 to give us encouragement, and whip us into shape,” the employee said with a smile. Hennessy is getting ready to turn over the original Santee Mary’s operation to her 24-year-old granddaughter, Kelly Hennessy, who is the store’s manager.

Mary Hennessy opened the original Mary’s Donuts and Coffee in 1984, on Mission Gorge Road. Due to a dispute with the landlord in 2016, Hennessy was forced to move her 24-hour operation a few blocks east to a strip mall on Carlton Hills Boulevard. A late night visit on April 24, waiting in line, showed the location is as popular as ever.

Scalzitti recently ran, unsuccessfully, for mayor of El Cajon and sits on the board of directors for the Helix Water District and the Lakeside Chamber of Commerce. He was not available for comment.

It sounds like Scalzitti took advantage of Mary. He should be ashamed of himself. Of course he is a slimy politician so what can you expect.

If his products and other offerings were so great, he wouldn't need to piggy-back on an already-established business. The claims made by the Santee shop employee of complaints their customers make about the rival operation would point that out. Yep, sleazy.

This article is garbage!! I cannot believe how many non-factual errors!! I know for fact, as witness the relationship between Mary and Joel. I witnessed Joel's involvement as he assisted her in the move from her original location to the new one just blocks down the street in Santee, and the construction build out and the hours of dedication. I witnessed the opening of the Lakeside store when Mary herself cut the ribbon at the Grand Opening. I witnessed Mary and crew in the Lakeside parade representing "Mary's Donut's" being both "Santee and Lakeside." I witnessed by attending, 2 Christmas parties that involved attendees from both the Santee and Lakeside stores. I witnessed as employees had at one time worked at both locations. I witnessed as both stores assisted each other in their needs. I witnessed Main Street Donuts and it's opening. I know for a fact that Joel Scalzitti is the easiest person to get in touch with and would be available for comment. Go talk to his employees, they are some of the most happy and well treated group of people!! I dare anyone to talk to Joel and Mary, two of the nicest people around. Before you report or jump to conclusions, why don't you find out the real relationship here instead of some "anonymous employee" with no name.

It doesn't change the FACT that Scalzitti is just a scum bag that took advantage of the largess of Mary. Show me where he is paying Mary for the use of her name or any paperwork showing a business relationship with Mary's Donuts in Santee. Of course donut shop employees may hang together just like car salesperson's may know and hang with each other.

Doug, Elisa, and gribbler, read the comment posted by Katrina. It explains the facts you have witnessed

Here's an interesting story and background of Joel Scalzitti:

This article does not deny a business relationship between Mary and Joel, just that he is taking advantage of a favor she did for him. I witnessed the interview with the Mary's employee. It's true Joel worked for Mary. He was such a good friend and employee that Mary helped him get started with his own donut shop by letting him call it "Mary's." Joel's Lakeside Mary's had the Mary's recipes. Then Joel started adding other items to the menu that were not Mary's recipes. People who visited Lakeside Mary's were complaining about the quality to the real Mary's in Santee. Then because Mary's Donuts Inc was not being used by Mary's, he got the name and uses it to promote Main Street Donuts in El Cajon. So Mary and Joel were such good friends she let him use the name to help him and he is taking advantage and smearing her good reputation with his Lakeside store.

I do not appreciate being conned and mislead into thinking I'm walking into a Mary's Donuts. Mary doesn't own the one in Lakeside or Main Street in El Cajon, despite what has been intentionally and inaccurately put on the sign.

Scalzitti wasn't just a long-time customer, he worked at the shop. He was close to Mary and her family as I recall. I interviewed him while he was working at the shop for the article in 2016. He mentioned at that time he would like to have his own Mary's shop some day. Did anyone talk to Mary or her family? Or Scalzitti?

Anyone talk to? . . . meaning me? I tried, but Joel didn't return my call and Mary and her family were unfortunately out of town, and the story was getting stale from the Californian article. And you know what its like Julie to try to beat the UT or TV on a piece. But much of the story was confirmed over the phone the day before I submitted, by another employee even after I ID'd myself as a reporter. Jim requested I reach out to Mary, rightfully so, and I did have several conversations with her people. She decided she and Joel didn't wish to comment further.

Much of the story confirmed.??? You should honestly print a retraction. You have slandered and tarnished a kind honest person. Shame on you!!! You think he would have the recipes or the logo or even use the name "Mary's", If it wasnt approved. You portrayed Joel as some scumbag that has picked through pieces to get ahead? Shame on you! Cant find any stories, that you create one and tarnish a reputation, so you can get ahead. ***ATTENTION READERS !!! THIS STORY IS FICTICIOUS AND FULL OF LIES. OBVIOUSLY THE "READERS" WRITERS ARE NOT HELD TO ANY STANDARDS OF TRUTH AND FACTS OF A STORY. What is this world coming to? Bashing a respected person of our community. Story not good enough you alter truths and accuse innocent people just to get printed. Isnt there a law against that sorted thing?