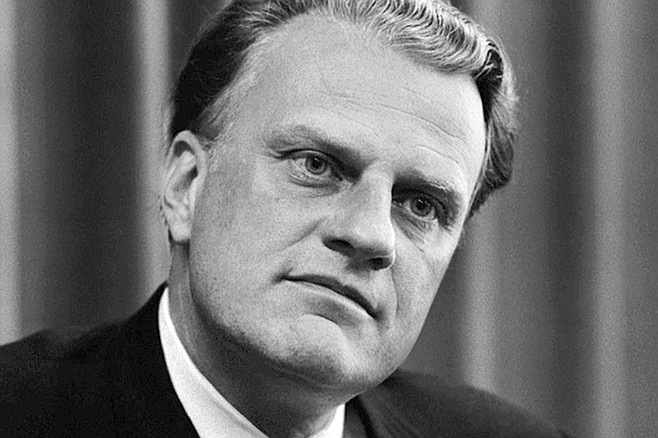 Billy Graham: Death, for the Christian, is overcome by the reality of hope — Heaven

“I don’t think I would be afraid to die if I knew what to expect after death,” said a young man with an incurable disease. Evidently, he had not heard of what God “has prepared for those who love Him” (1 Corinthians 2:9). This young man had within him the fear of death. By nature, we fear the unknown. But the Bible says that the grave is not the end for anyone but rather the beginning of eternity…. The child of God has no need to fear death. Why? God has not left us with the spirit of hopelessness, for He is “the God of hope” (Romans 15:13). Death, for the Christian, is overcome by the reality of hope—Heaven. …. This term born again has fascinated people for centuries. It simply means “born from above”—born into the family of God. We are all God’s creation, but we are not all God’s children. Those who are born only once (physical birth) will experience physical and spiritual death, what the Bible calls the second death. But those who are born twice (physically and spiritually) will die only a physical death because they will be resurrected to life eternal.

– from Where I Am by Billy Graham.

Billy Graham (1918–2018) was an American preacher, Christian evangelist and one of the most prominent religious figures of the 20th and early 21st century. Internationally known and revered, Graham was an ordained Southern Baptist famous for his expansive indoor and outdoor “Crusades,” which, among Christian events, only papal audiences, especially those of John Paul II, seemed to rival in attendance. One of the original TV evangelists, he was an early proponent of racial integration and invited Martin Luther King, Jr., to preach jointly at his 1957 revival in New York City. Graham was also known as a spiritual advisor to U.S. Presidents, from Harry S. Truman to Barack Obama, and was particularly close to Dwight Eisenhower, Lyndon B. Johnson, and Richard Nixon.