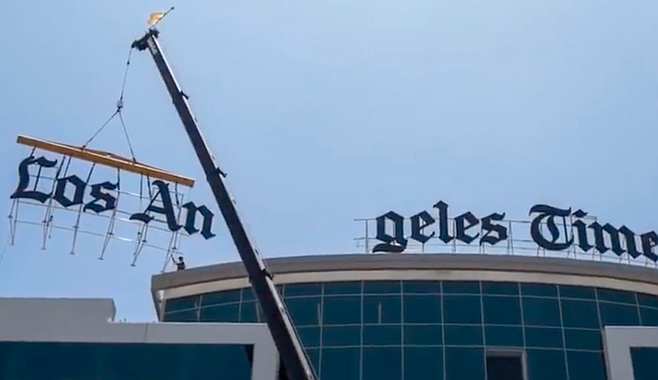 A bold new digital subscription prediction by Los Angeles-based Patrick Soon-Shiong regarding the L.A. Times, which he bought last June for $500 million-plus and has since infused with $150 million worth of staff salaries, along with an elaborate El Segundo headquarters, has some Internet mavens rolling their eyes.

"I have made a decision to invest what it will take to make sure that the Los Angeles Times remains a viable business for at least another 100 years,” Soon-Shiong was quoted as saying by the Wall Street Journal in a story run March 19. “If we get to five million ultimately, that will make that possible.”

Noted the Journal, which observed that Soon-Shiong presented no timeline for achieving his objective, "the target is no small task, as the Times now has 150,000 digital-only subscribers." 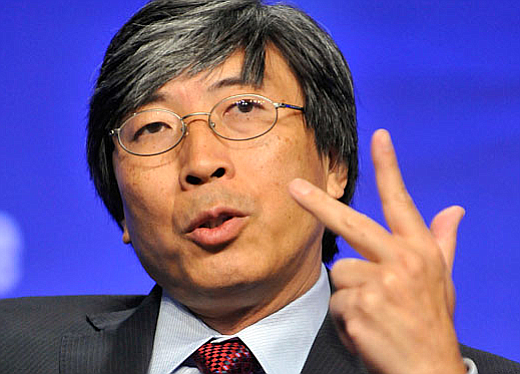 Patrick Soon-Shiong: "We're obviously now one to two years behind. But it won't take us long."

Soon-Shiong, who also acquired the San Diego Union-Tribune when he bought the Times last year, went on to share an ambition for his L.A. flagship that could spell eventual doom for the smaller paper, which has turned out to be the poorer little sister in the deal.

"He said he envisioned the L.A. Times as a kind of super-regional news source, with its primary focus on being the paper of record for California’s 40 million residents," according to the account, "rather than trying to compete directly for a national audience with the New York Times or Washington Post. But he also wanted to expand the L.A. Times’s audience reach into Mexico, western Canada and across the Pacific Rim, as well as into surrounding states."

Those ambitions are revised a bit downwards from the wealthy physician's proclamation last year to National Public Radio that "we'll be as competitive vis-à-vis the New York Times and The Washington Post. We're obviously now one to two years behind. But it won't take us long. I hope, to be as competitive and to be perceived not just as a regional paper but indeed a national paper and hopefully an international paper."

The Journal story made no mention of the future of the Angeleno's faltering San Diego holding, but for the Times to have any hope of getting to five million paid subscribers as a regional powerhouse, observers note, the U-T would likely have to get out of the way.

Despite his hopes for the future, the billionaire obliquely acknowledged that making money as a big-time publisher isn't easy these days, and he called for unspecified action against the newspaper industry's current top nemeses, Google and Facebook.

"They freely use all the amazing journalism work being produced locally, regionally and nationally while drawing away the revenue stream,” he told the Journal. “At some point, something will have to be done to address that, because it has become an unfair breach of the infrastructure of democracy.”

Yet, in the face of plunging circulation in both L.A. and San Diego, Soon-Shiong vowed to carry on printing the Los Angeles paper, at least for the time being.

"Dr. Soon-Shiong said he remained committed to producing a print product for the foreseeable future," the Journal reported, "despite circulation that has fallen 68% in the past decade on weekdays to 233,000, and 54% on Sunday to 477,000, according to the Alliance for Audited Media."

Unspoken was the ticking time bomb represented by the paper's downtown L.A. printing plant, which produces the runs of both the Times and U-T. The property was sold to a developer by Times prior owner tronc, Inc., and the lease to Soon-Shiong is reportedly set to expire in 2023.

Meanwhile, in San Diego, the latest estimation by SimilarWeb.com has total online visits to the U-T's website down 22.44 percent.

Local journalists have historically been too close to the movers & shakers that they report on. That has led to various coverups and refusal to report significant activity to the public. A journalist's first loyalty should be to the public, not to the powerful elite. Perhaps reporters from LA would be more inclined to give us the 'straight poop' as Matt Potter does.

Agreed. It's totally depressing how many things don't get covered well or at all because of that (or how many press releases get regurgitated and then re-regurgitated by other news outlets). One thing former SDR editor Rob taught me well is when covering anything, especially when it comes to movers and shakers, is to look at it with an arched eyebrow and follow the money. To be brutally honest about where the story goes isn't for the faint of heart. It pisses a lot of people off on all sides. Thank gawd Potter digs deep.

I’m an online subscriber to the U-T....wait before you belittle me with insults...I was lured into the subscription last fall with a deal...nine months for a dollar. Hey what can you get now-a-days for a buck? So while I don’t read the UT everyday. I do go through it four or five times a week. When the promotion period ends in a few months I’ll probably cancel. It takes a little more effort but I can usually find the information I’m looking for from others on the Internet.

The numbers the SDUT reports every October are skewed. They are akin to porch pirates in reverse as they deliver the paper to non-subscribers to pump up their numbers for advertisers. Not printing the paper locally was a bad move. They can't cover anything local that happens after 8 or 9 p.m. So much of their content is from non-local sources.

In the August 16, 2018 U-T, about half the stories were sourced from the New York Times, Bloomberg News, the Washington Post, Associated Press, Reuters, L.A. Times, San Jose Mercury, and news services. Nearly 90 percent of outsourced stories were in Section A (front page), business, and sports sections.

My Sunday only rate has gone from $7.92 to $11.92 to $18.80 per 3 month delivery. Forget it! I will be cancelling. I emailed SDUnion Customer Service 2 days ago to inquire and have turned blue holding my breath waiting for a response! I am cancelling!

They send you to a foreign land for customer service.

It has been a while, but the last time I picked up a Sunday UT, I think it was at least $2.50. I know the LA Times is $2.75, so I would imagine the UT is about the same. I understand that rates have gone up in recent years, but when was it that you paid $7.92 for 12 weeks? And when you are paying about $1.56 a week for a Sunday paper, delivered, it is still a least a buck cheaper than going out and buying one.

Fascinating. I used to pay UT for weekend deliveries and online access. I gave them access to my credit to bill me regularly. Then the billing became irregular. Different amounts, different times of the month. I was suspicious, but I didn't question it. Then I retired. I had time. I pulled up all charges from 2013 to 2018. Yearly, their automatic charges went from $220 in 2013 to $660 in 2017. So you betcha I canceled those suckers. That's the reason I don't trust them.

As long as the UT is owned by an out-of-towner especially the current corrupt greedy owner I will never buy the paper.

So exactly how is it that he is corrupt?? And since he paid about a half a billion, and took over about $100 million in debt, for the LAT and the SDUT, how is he any more greedy than anyone else who has owned the UT.

Ming have been a little hasty on the corruption thing. As for him being any more greedy that others who have owned the UT I will have to agree that he is probably no more or less greedy than the others.

Maybe respect the political spectrum as represented by their target audience? Stunning to see so many newspapers/magazines “eat their own” with narrow political ideology seeping into every aspect of their publications.

I realize that this just my opinion, but I agree. Wouldn’t it be great to have a NEWS paper filled with fact based information. Presenting factual information without lacing in opinion or steering me toward the author/editor’s conclusion is what I grew up on. I can reach my own conclusion(s) if I could just get the facts. Thank you very much.

Sadly, what we get these days is opinion, or ideology cleverly disguised as news for the uneducated. Worse, there is little, if any, counter opinion offered. Just mind numbing drivel from a single point of view.

You grew up on newspapers that didn't slant/spin/opinionate the news? Where was that? Which newspaper(s)? All of them do that, and always did. In fact, in the 19th century and into the early 20th century, most "news"papers had an axe to grind, big time, and did that continuously. Too many of them nowadays just print the content of press releases from government agencies and corporations without any skeptical treatment or verification. The articles come across as dry and purely factual where in fact they usually are putting the best face on things that are not clearcut at all.

Ben Franklin himself was a master manipulator and understood that owning the media was the way to 'guide' public opinion in a way the would benefit his interests.

As does Manchester et al

And Joseph Pulitzer competed with Hearst to publish "yellow journalism" in their newspapers.

Maybe we have evolved and want more transparency and less bias.

"California Times?" Is that a hint at a future rebranding?

Not surprising that the UT numbers have slumped. Now all we get is copied articles from the LA Times and more coverage on Mexico than San Diego. Most of the articles are just bits of propaganda for the Democratic party. Very little "news". I hope he sells it to someone who actually cares about this region. LA sucks and so does the LA Times.