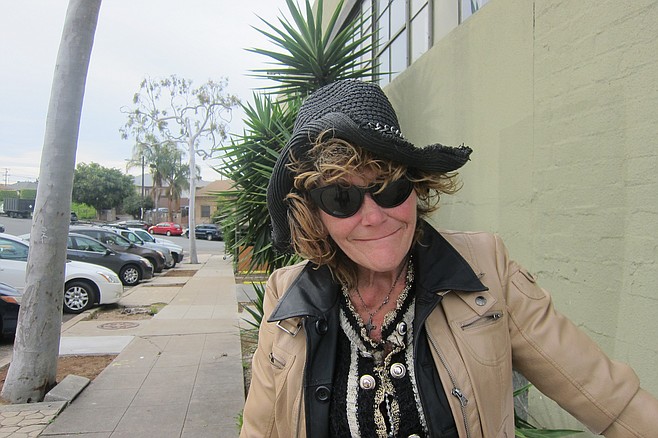 An apartment building made out of shipping containers is coming soon to Logan Heights. 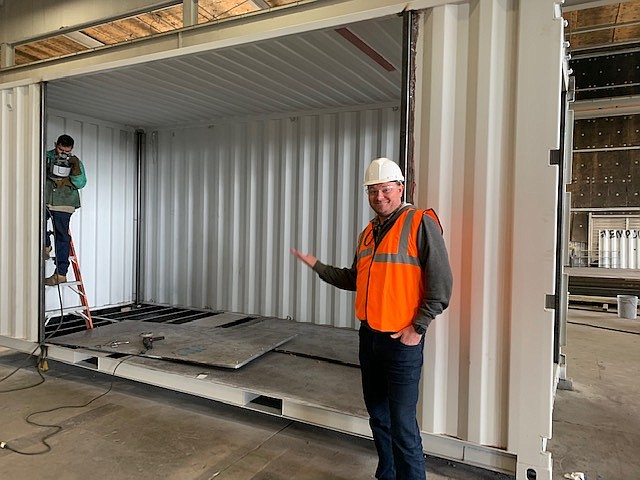 Copley at the factory with the prototype last week. (Michael Copley)

The project originally planned for completion in April is now looking to come closer to June. Copley said the project involves permitting from both the state and the city. The former covers the building of the actual housing offsite and the latter only covers site permitting (foundation and grading). The project is currently in state permitting (takes two weeks) with city permitting to follow (estimate of a month).

While similar future projects may take just 12 months from property acquisition to turning the lights on, this first one took longer to design than originally planned. Part of this was taking the time to look at similar projects to learn from the mistakes of others. 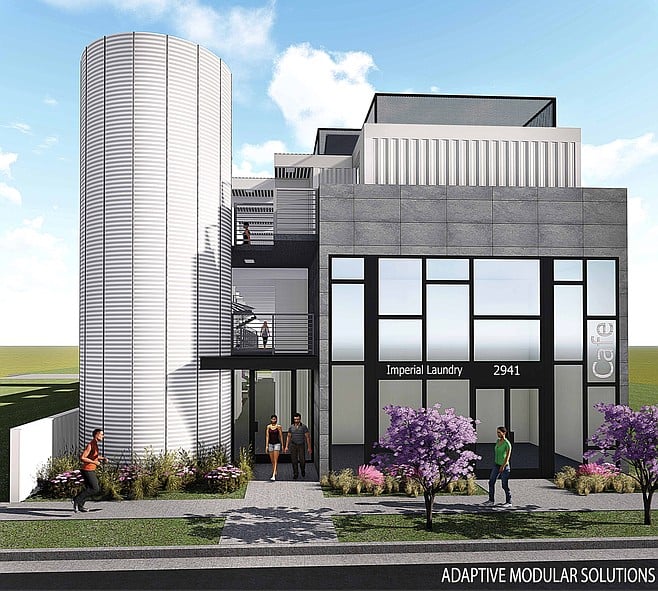 "The floor plan is difficult. Shipping containers are ridged and very unforgivable. With two shipping containers, you can only do so many floor plan designs. You have to pick one and stick with it. With no ability to move walls, you have to be strategic about every plug and cable. We had to pick which walls we thought tenants might want to put TVs. We had to really think about how people will be living in this unit."

The walls can't be drilled into later to add a line like regular housing materials.

The entire building will use 42 shipping containers from CRATE Modular. Each will be from one-use non-toxic dry-goods containers.

Copley and Holmes said the building will have that modern industrial look externally but prettier. The only part of the shipping container seen inside will be the corrugated metal ceiling. 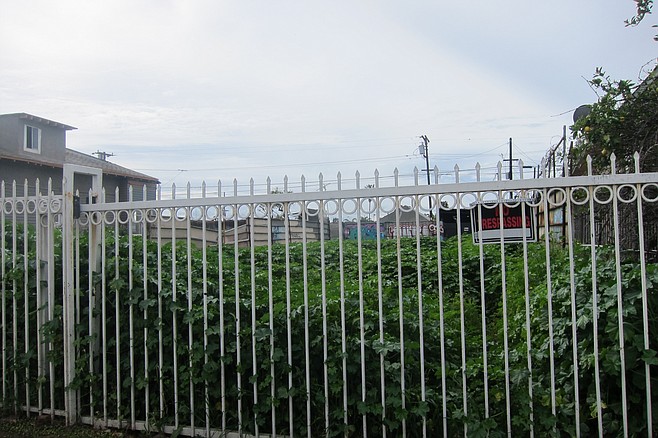 Each of the 21 apartments will be 320 square feet with private kitchen, bathroom, and balcony. There will be five parking spaces for the commercial space and easy public transit options for residents (bus stop on same block and a trolley line nearby). I could see downtown from the project site. A gentleman across the street confirmed what Copley told me: "People walk to downtown all the time instead of driving or the bus."

Currently Makana has permission to rent several units at market rate. Copley and Holmes are proposing to deed restrict the property so all the units are rented to middle and low-income tenants. Instead of restricting rent on half the building for 55 years, they are proposing restricting all the units for ten years. This may make things more attractive to developers which in turn may get more housing built quickly. 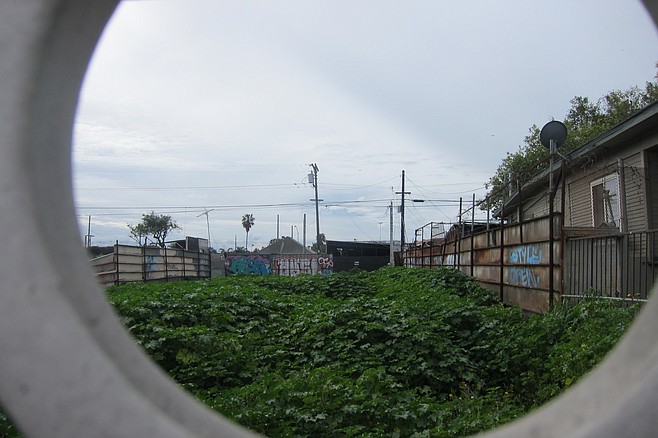 The next door neighbor said the place does get cleaned up.

Copley is working with Veterans Affairs to house handicapped homeless veterans on the ground floor. He said handicapped veterans have a really hard time finding places. He said they get rent vouchers of $1360.

Copley sits on the board of PATH Connections Housing, a group with a mission to ending the cycle of homelessness.

Copley said that CRATE is developing off-the-shelf accessory dwelling units made out of shipping containers (similar to housing kits that flooded the market in the 1950s).

According to the city, permitting requirements are the same regardless of materials used. They confirmed shipping containers would be acceptable to use for granny flats as well as homes in single-family neighborhoods.

Currently the commercial lot at 2941 Imperial Avenue is vacant and overgrown with weeds and graffiti. A house burned down there years ago. The neighbors next door said, "It gets cleaned up every once in a while. They haven't been here in about a month."

When asked about the shipping container project, Marco Cisneros, chairman of the Greater Logan Heights Neighborhood Council, said weighing much more on the communities mind is a meeting on March 12 to expand the contract on a homeless storage facility at 20th and Commercial in next door Sherman Heights (contract expires June 2019, city looking to extend it until June 2020).

Steve Veach, chair of the Southeastern San Diego planning group, said the community would oppose increasing the bins to more than 500. Per a facility employee, they have 200 people on the waiting list for a bin. A homeless gentleman told me he has to sign up for his bin every three months.

"Ever since it went up [June 2018], there has been an increase of trash on our streets, human waste, and a lot of needles," said Cisneros. When visiting the area on Sunday, the very first person I saw after exiting the freeway was a man shooting up.

Cisneros has seen a significant uptick in the homeless population since the storage facility opened. He said they have moved to be closer to their belongings and they are spilling over from Sherman Heights into Logan Heights next door.

To make matters worse, Cisneros said around the time the storage facility opened, "recycling centers started popping up on every corner, at least five I can think of within a one-mile radius."

"We want to help out the homeless as much as we can but it takes a toll on our neighborhood. Help for the homeless is getting centralized in our district."

"We've had homeless monthly meetings with the mayor's office but it's turned into an echo chamber. We keep telling the mayor's office the same thing and they come back the next time and say they thought we meant something else. They are giving us the runaround."

The morning of the last homeless count in January, Cisneros saw the police during his 3:30 a.m. run writing tickets and arresting people. "They were all lined up along the bridge at 12th and Imperial. I didn't know what was going on at the time. Later it clicked when talking to others. I don't know if it was the mayor's office but it looks like the police moved them around to skew the numbers." He said he brought this up to councilmember Gomez's office. "She wasn't in the room, but her office said they knew they did that. We need actual numbers. We don't need skewed statistics. 'That costs money, her rep said.'"

This reminded me of looking at the numbers for the homeless count in 2018 for Census Tract 65 (Midway District in Point Loma) where zero homeless people were counted. For the record, it's impossible to not see a homeless person when visiting the Midway District.

When asked about this anomaly, Sergeant Michael Stirk said any statements about the police moving people around is vague and speculative, especially since those numbers are used to apply for federal grants. He said it's possible a radio call led to a police response.

One block up from the storage facility on Sunday, I met Shelley Sharrett, 57, camped out in front of a business. A native San Diegan, she was born at Balboa Hospital from a third-generation Navy family.

As we talked, she loaded her things into a lime green shopping cart she bought off someone for $10. She has a bin at the storage facility but no place to store her cart.

Sharrett said the streets are much cleaner since the facility opened. She told me she moved to the neighborhood to be closer to the storage facility.

I watched Sharrett cross the street several times to dispose of trash into a receptacle. I only saw homeless people putting things into trash cans and none going through them. The street was surprisingly free of trash.

The police presence was heavy. She mentioned several times the police were coming back to make sure she had cleaned up her mess and moved on. And they did several times. They were polite but firm. The one other homeless gentleman I saw sitting down was approached with lightening speed by the police.

Homeless for 2-1/2 years, Sharrett's family thinks she lives in a shelter. "It would be too embarrassing to tell them I'm on the streets."

As if on cue, a gentleman pulled up in a white Mercedes SUV and offered me a room. He finally left, but it took several minutes to solidify my serious non-interest in his room.

Sharrett just shook her head and said, "Living on the streets, you need to know your next move."

As I headed to Imperial Avenue to check out the shipping-container project site, the streets were less clean and the loitering was more prominent, bolstering Cisneros observations.

Mike Murphy, good point. Especially since the apartment building is being put in where the pervious structure burned down. There seems to be a lot of interest in using this material for granny flats. They are keeping the look of the containers on this project, but one could cover it up so it doesn't look like shipping containers at all.

No one I talked to in the city could think of any other projects like this one in the county. But both the city or county told me they don't track projects via materials used.

Here's the layout of the apartments: http://www.sandiegoreader.com/users/p...

They are smaller than my North Park apartment, but more stylish and with newer appliances. Certainly much better than those rundown SRO hotels.

Maybe a silver lining for all the SROs they redeveloped the last few years? The loss of all those SROs seems to run parallel with seeing more people on the streets. The homeless lady (Shelly) I spoke with for this article, she said she wants something for $800 to $900 a month that is safe and clean. Too many of the SROs have bed bugs is what I'm told.

Where I found her (where she had slept the night before) was in front of a business with a sign that said "no trespassing" and a warning she was on camera. That was an engraved invitation to Shelly. She told me she seeks out places that have cameras so if something happens to her, someone will know what happened to her. She said it's much rougher for females on the streets.

I also talked to a kid that says he was no longer homeless but had been with his mom when he and his twin brother were younger. He said when they turned 13 they weren't allowed to stay in the shelter anymore with their mom. Some shelter rule. So they had to sleep on the streets with their mom.

"Instead of restricting rent on half the building for 55 years, they are proposing restricting all the units for ten years."

This is an interesting strategy, so in 10 years all the units go back to market rate? And the low income tenants get pushed out, the neighborhood becomes more "desirable". Please write an update when this project gets built. Those renderings always lie.