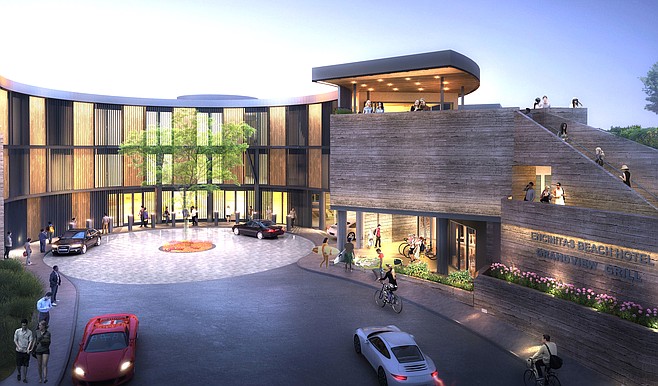 Warning . . . Crime is coming to Leucadia. Robbery. Prostitution. And worse yet . . . an infestation of bed bugs. That’s according to a two-week-long protest by a construction union.

Carpenters Local 619 says the current construction of the $110 million Encinitas Beach Resort on Coast Highway, overlooking South Carlsbad State Beach, is the “Desecration of the American Way of Life.” That’s according to a union-printed flyer handed out by three protesters, positioned below the job site, to inquisitive passersby. 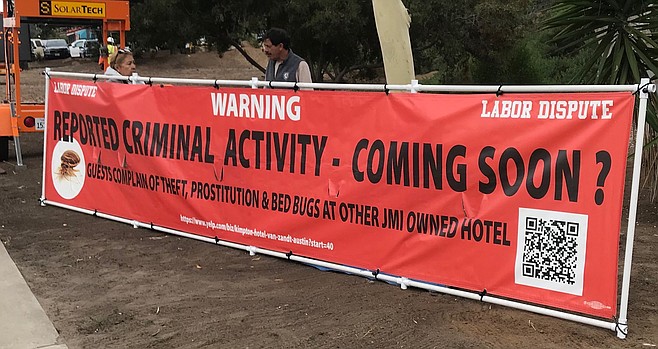 The flyer, and the group’s large banner, attempts to shame JMI Reality, the project’s developer. JMI is owned by John Moores, former Padres owner and force behind SDSU's stadium in Mission Valley. The union flyer advises that a contractor, Unique Building Group, “does not meet area labor standards for all carpenter craft workers, including paying for family health benefits and pension.”

However, on the job site, the main contractor is clearly identified as Suffolk Construction. Of the banners posted by subcontractors, Unique Building Group was not one of them.

Margie Newman, spokesperson for JMI Realty, said the company has a 27-year record of building beautiful hotel projects around the country, using both union and non-union skilled labor. Of the local protest, “We’ve had no disruption in construction,” she said.

Two construction workers on a lunch break, who identified themselves as members of a trade union, concurred. “I have no problem with working here,” one said. “I have no idea what they’re [the protesting union] talking about,” said the other.

The flyer’s backside shared three, one star YELP reviews of other supposedly JMI properties, but without identifying a hotel location. The flyer urged one to call the CEO of JMI and “tell him the you want him do all he can to change to situation.”

Attempts to get a comment from Carpenter’s Local 619 were unsuccessful.

Me thinks that bed bugs are rampant no matter who builds the hotels.