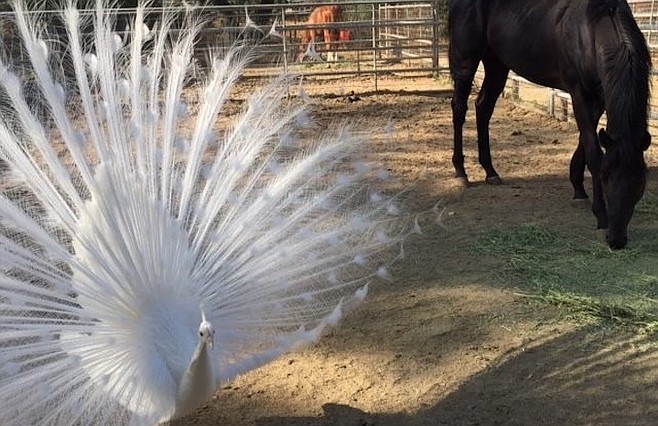 On June 20, at around 3:15 pm, Shirley saw white feathers scattered by the mailbox outside of her Valley Center farm.

“Oh no!” she said herself, “one of my peacocks has been hit."

She then found the bird lying in the middle of Cool Valley Road by Cole Grade Road, southwest of Highway 76. 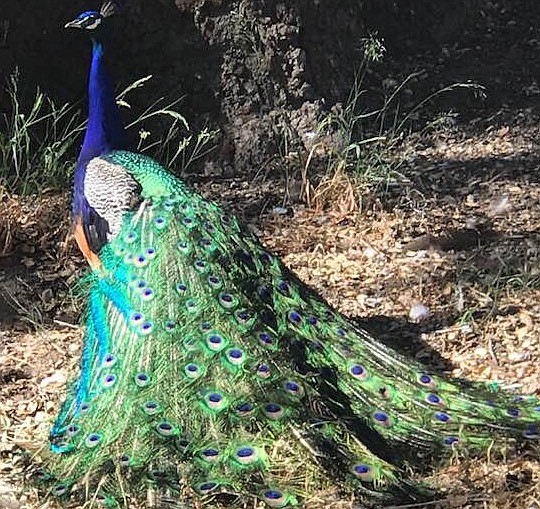 “I scooped him up,” Shirley said on a June 23 interview, “he was extremely dazed; couldn’t hold his head up; and was breathing very hard. I didn’t think he was going to make it.”

As Shirley was loading her injured peacock into her car, she noticed that the driver that hit the peacock remained at the scene.

“She was visibly upset and apologetic,” Shirley said.

The two parted ways, and after about 30 minutes, the driver who hit the peacock posted in part on Facebook: “I feel terrible …. I didn’t even see it before I hit it …. I don’t know how bad he is. If you are the lady I spoke with that took him to care for him, please let me know if he makes it. I feel so bad and shaken by this. If he needs help or a vet please private message me so I can do what I can for him. I’m terribly sorry.” 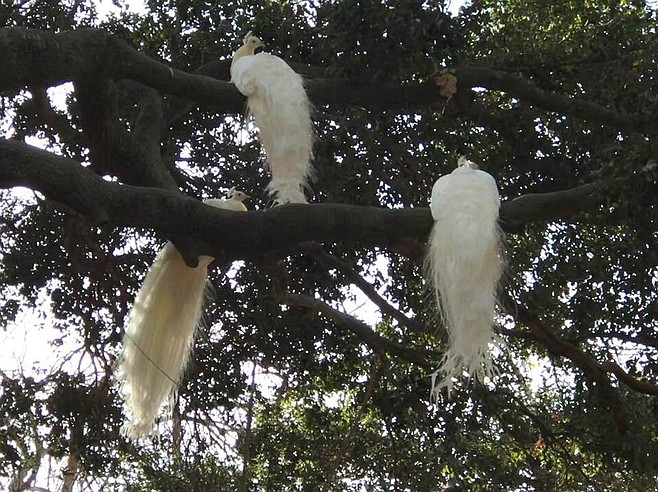 At night, the peacocks roost high in trees.

I reached out to the driver for an interview, but she didn’t reply; 65 others commented under the post and many commended her for stopping and offering to help Shirley with the vet bills.

“His legs are scraped and there is blood under one wing,” Shirley responded in part underneath the driver’s post. “He is still alive, now walking, and his breathing is back to normal. I don’t know about internal injuries but he seems to be okay. Thank you all for your concern and thank you [the driver] for caring.”

Shirley has raised a few peacocks since 2009; she has a degree in zoology from UC Davis and has “extensive” exposure to veterinary procedures. “[Although,] my expertise is in raising thoroughbred race horses,” she said.

“Peacocks are people savvy: these peacocks are leery of strangers, and they will walk or fly away. They are coyote-savvy: at night, the peacocks roost high in trees unreachable by coyotes and other wildlife. The main danger is during breeding season; the peahens do sit on their eggs on the ground.” 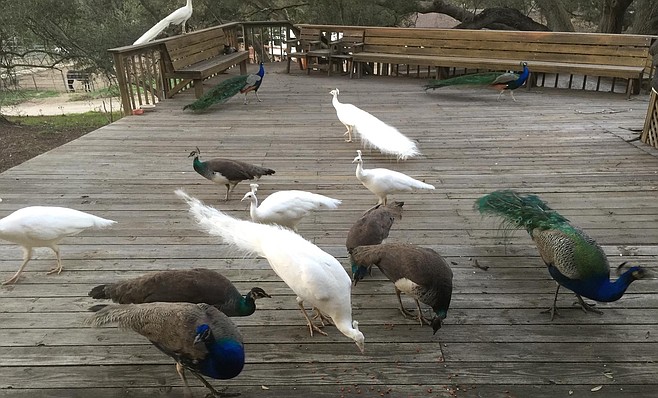 Shirley has raised a few peacocks since 2009.

Shirley’s white peacock is leucistic, which is a rare condition that causes a reduction in the normally blue-green-brown pigmentation of the feathers on the birds’ body.

“I’ve almost hit the blue one twice on Cool Valley Road,” said another driver. “[It] sucks — owners need to contain them better.” 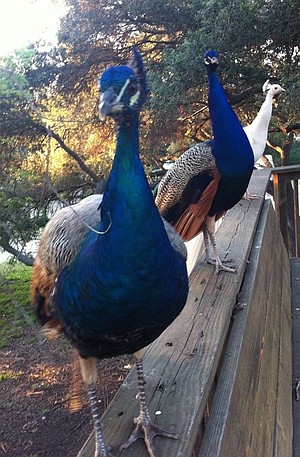 The main danger is during breeding season.

WD drives slower in the area because he’s seen peacocks and peahens at Coyote Run, half a mile south from where the white peacock was struck on Thursday. “I've almost hit cars that are stopped in the middle of the road because of them, and [I’ve] almost been hit for slowing down for them.”

“I think drivers should slow down on Cool Valley Road,” Shirley suggests, “it’s not a main street like Cole Grade Road or Valley Center Road, and if one can’t see a 5-6 foot peacock, they aren’t going to see a child. This is not directed at the driver who hit my peacock; the peacock was in a blind spot on the road and the driver was truly apologetic — it was just an accident.”

From spring into early summer, peacocks are said to gather with other peacocks and take part in mating rituals by dancing, displaying their train, and squawking in order to attract the peahens.

They think they own the street. Very bold and beautiful. There are many animals, wild and domestic who wander the area. Best to drive slow and enjoy the scenery.