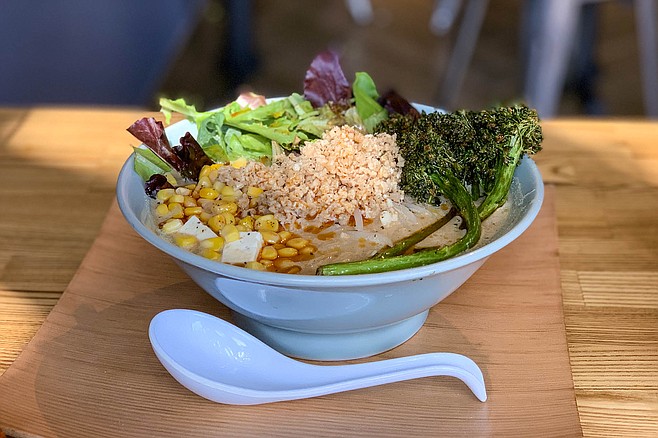 I’ve paid lip service to vegan ramens before. Interesting, I’ve said. Oh, that is good,” I’ve agreed. But I haven’t meant it. Not to the extent that I would choose to order one over a milky, rich tonkotsu ramen. Tonkotsu is the bone broth that made ramen special, elevated it above the other noodle soups. Forget chicken noodle, tonkotsu is the only broth to ever cure me of a cold. I might pander to vegan friends, join them in a lesser ramen, and try not to let on just how much they’re missing out. But I’ve never gone home thinking, I should go back for that vegan noodle soup.

Until HiroNori Craft Ramen turned up in Hillcrest.

There are actually two shocking twists to this ramen adventure, and the first is that the HiroNori brand I’m about to recommend started in Orange County. Worse than that: it started in Irvine. I am smitten with a vegan ramen from Irvine. Is there a support group for that?

Kidding aside, misters Hiro and Nori, the namesake partners behind the fledgling restaurant chain, each cut their teeth in the ramen kitchens of their native Japan. And the resulting centerpiece of their restaurant is a true, 24-hour steeped tonkotsu that tastes indulgently rich and deep as the Mariana Trench. HiroNori wasn’t one of the eight San Diego restaurants given a Bib Gourmand nod by the recent Michelin Guide California, but it did earn one serving the same food in Irvine, and this pork broth alone proves it’s deserving. 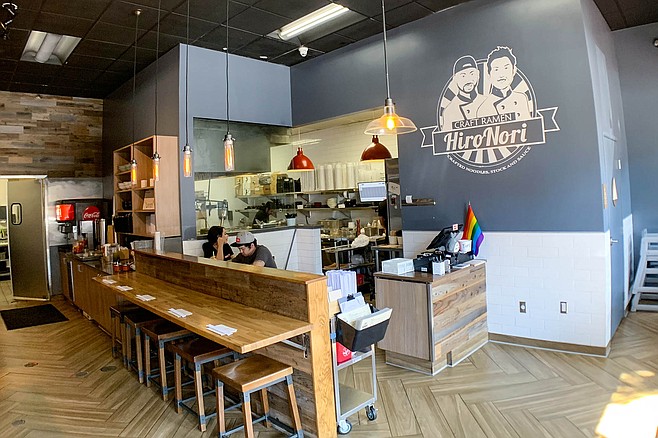 HiroNori seems poised to change the fortunes of this otherwise cursed restaurant space.

But do not sleep on the vegan ramen. It starts with a miso base, no big deal, but wooed me with the thick addition of sesame paste and a touch of chili oil. It sounds so simple, and I’m sure it is for someone who knows what they’re doing. And yet, it succeeds where other vegan broths fail.

The toppings even do it for me, and they include both tofu and “soy meat.” The setup here is based on a tantan style ramen, so the soy meat replaces ground pork or chicken. I guess the tofu is just there to remind you there’s no meat involved in the making of this soup. There’s also baby kale, corn, and bean sprouts, but the best topping was the still crispy roasted broccolini. I’d almost come to this restaurant just to order a side of broccolini. Like the noodles are the bonus here. And these wide, toothsome noodles are a heck of a bonus.

I don’t know whether Hiro and Nori realize it, but they opened this little spot on a section of 5th Avenue that has been nothing short of murder on restaurants over the past few years. I’ve seen three different restaurants close at this very address in as many years. Maybe it took a couple of Orange County guys to set the place aright. Even in a city oversaturated with ramen spots, this one should last.