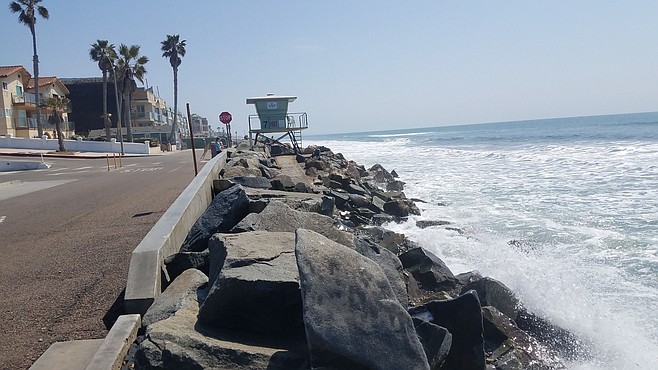 Will Oceanside use groins like Newport Beach to save sand?

“We are not going to back down”

The decimation of Oceanside beaches was the whole point of forming a group called Save Our Sand [SOS] Oceanside. At its first meeting June 17, some 25 people shared their stories about what it means to have little or no sand on the southern two-thirds of Oceanside’s 3.5-mile coastline.

“There used to be flocks of Snowy Plovers on my beach for years,” says Jo Moore who has lived on the beach for three decades. “I used to count seabirds for the Audubon Society. Last year I saw one Snowy Plover all year long. That’s because there is no more food for them. The sand crabs have all washed away. And the grunion now have nowhere to run. It used to be that we could put three volleyball nets up, side by side. Then it was two. Now we don’t have any room for any volleyball nets at all.” 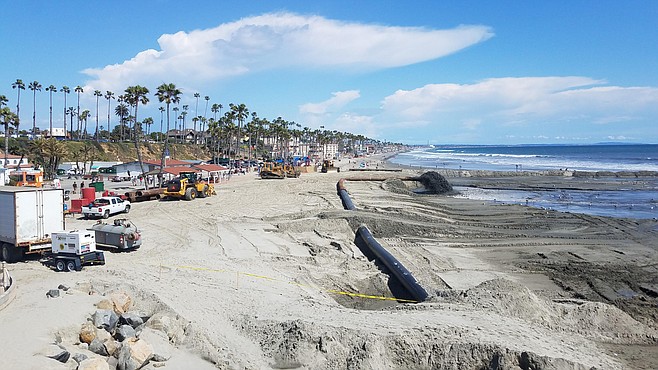 Chris Abad is one of the co-founders of the Oceanside Boardriders Club, a non-profit group with 100 members that wants to solidify the Oceanside surf community. “I met my wife on the beach at the end of Oceanside Boulevard six years ago. I proposed to her at the same spot four years ago. Now that beach is gone. Now there is basically no sand south of Tyson Street. The waves still break like they used to, but now because they break on the rocks, you get all this backwash.” He says the break at Oceanside Boulevard is no longer a viable surf beach. “It’s gotten to be this way just in the last two or three years.”

Longtime Oceanside lifeguard Matt Mattison attended the SOS Oceanside meeting on his own time. He told about how the lifeguards used to be able to drive their trucks from the northernmost point at the Harbor, all the way to the southernmost beach at St. Malo. He says now if a rescue needs to be made south of Tyson Street, the guards may have to get to the distressed scene via watercraft or by driving to the area on Pacific Street or The Strand.

One lady named Caroline says she and some of her beachfront neighbors have accepted that they have to pay to have a wall of boulders, also known as revetment or rip-rap, dropped in front of their house at up to $1000 a foot, just to protect their homes.

Beachgoers no longer can run or sun at South Oceanside’s Buccaneer Beach or at beaches at the end of Cassidy, Wisconsin or California Streets.

While global warming may seem like an obvious culprit, SOS Oceanside co-founder Bob Walker says that scourge isn’t due to torment our coastline for a few years. “The city is saying that by 2050 they will have to decide whether we will just walk away from the harbor and give it back to nature, or raise all our harbor front buildings.” Walker says that a so-called Local Coastal Plan meeting was held at the council chambers earlier this year. He says today’s erosion is all due to the natural migration of sand that is perpetually swept southward by the sea current. “We haven’t seen the rising tides but we have seen more turbulent storms. That exacerbates the erosion of the sands.”

Dealing with sand erosion in Oceanside is nothing new. For decades the silt and sand buildup is pumped from the harbor basin via big plastic tubes and has replenished beaches north of Tyson street. These beaches last only until they are denuded by the current and wave activity.

The major big-rock jetty that protects the harbor begins at the Del Mar Beach on Camp Pendleton and juts out west and then turns south. The first portion was built during the 40s. It restricts the sand from flowing south. Two other shorter jetties known as North Jetty and South Jetty, trap and keep sand within the harbor beach. The pier also acts a “soft groin” to help retain sand on its north side.

In a memo sent out last year, Oceanside public works director Kile Koger addressed some of the remedies for Oceanside’s denuded beaches including nourishment (sand pumped in or dropped off by trucks) big breakwaters like the Del Mar jetty, smaller groins perpendicular to the coast, or underwater reefs where huge concrete blocks are dumped offshore to form a underwater seawall parallel to the coast.

The City of Oceanside has yet to act on any of these. But the new SOS Oceanside group says there is one clear best choice: Installing a series of five boulder groins every half mile or so that jet out west, similar to the series of groins installed in Newport Beach 50 years ago.

While Oceanside’s city manager or city council has yet to take specific action, department head Koger says he tends to agree with SOS. “We need a permanent structure in place.” He says he plans to meet with the new group in a couple of weeks, and would have attended its first meeting had he not had a prior commitment.

SOS Oceanside’s Walker believes the biggest obstacle to building sand-retaining rock groins will not be the City of Oceanside. “The big problem is with the [state] Coastal Commission. They don’t want to do anything that interferes with the natural flow of the sand down the coast.” Another anticipated roadblock may be that the City of Carlsbad would complain that new Oceanside groins would prevent them from getting their regular flow of sand.

Oceanside's Koger agrees with Walker that the Coastal Commission would probably be the source of greatest resistance. SOS Oceanside’s Walker counters that the Newport Beach-style groins saved the beaches and that they have not significantly interrupted sand migration going forward.

Also discussed at the first SOS meeting was the fact that Oceanside’s congressman Mike Levin wrote a letter to the Army Corps of Engineers reminding them that they built the Del Mar jetty and admitted that they are responsible for mitigating any changes in sand migration they have caused. One of the resolutions could be that the Army Corps would build a sand bypass system that would permanently pump the sand trapped to the north of the Del Mar jetty onto Oceanside beaches.

Save Our Sand Oceanside co-founder Dirk Ackema was real clear about the mission of the new group. “We are ambitious. We are not going to back down.”

At the debut SOS Oceanside meeting Ackema shared a sign posted at the Wisconsin Street beach stairs that describes the new reality as Oceanside beachgoers are greeted with boulders rather than sand. It reads: “USE EXTREME CAUTION – Stairs are steep and may end short of the beach. Persons using this access do so at their own risk.”

Two days after this story appeared, three local TV stations created their own stories about this. Here they are.