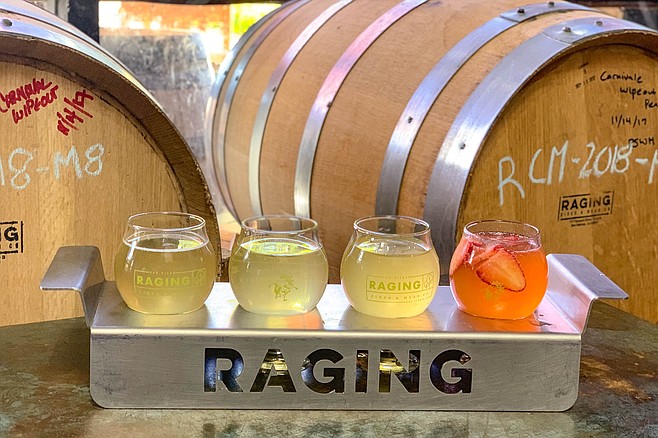 While tasting ciders at Raging Cider & Mead in San Marcos last year, I got talked by the bartender into trying one of the tasting room’s house cocktails, dubbed a StrawPerry. That the concoction involved slices of Pauma Valley-grown strawberry in the glass is what sold me, but it also wound up being a first taste of the brewed beverage known as perry.

Whereas pear cider may be made from a blend of pears and apples, perry is made strictly from pears. And like the strawberries in that cocktail and most of the beverages made at Raging Cider, the pears going into this one had been grown locally. They grew on Volcan Mountain, outside Julian, in one of orchards that owner and cider maker David Carr manages or owns. Beyond the fruit’s San Diego terroir, all of Carr’s perries are naturally fermented, using only the yeast on their skins when harvested or run through pressing equipment.

When I heard last weekend that Raging had made three different perries available to taste — and brought back the StrawPerry — I made my way back to discover just how versatile the libation could be. As anyone who’s eaten both apples and pears will be aware, the fruit are similar, though pears tend to have softer flesh and a distinctive flavor of their own. But what about from a cider maker’s perspective?

As Carr explains it, the pears he uses tend to have lower acidity on average than apples, meaning he has to test the pears going into a perry to ensure they have enough acidity to avoid producing off flavors. “You also need to be careful of the preliminary sugar levels,” he says, “especially with dessert varieties, as they have higher sorbitol levels which will leave residual sweetness.”

That explains the semi sweetness of the first perry on the board, the Modern Perry, made with a combination of dessert pears and more acidic wild pears. This one tasted as one would imagine a pear cider would taste, lightly floral and wine-like, but with pear forward flavor and juicy mouthfeel.

A single varietal was used in the StrawPerry this visit: the Seckel Perry. Carr says the fruit for this one turned on the bland side, with low acidity, so they allowed it to sour in the brewing process, to bring out more flavors. It was much drier than the Modern, with a zip of tartness, akin to a kettle soured beer. That tartness served the Seckel well when mixed with bitters and strawberry simple syrup for the cocktail — or cidertail, as Raging calls it.

What turned out to be interesting about the third perry on the menu, is it was the same Volcan Mountain perry I’d encountered last year, but it’s been aging since then in Chardonnay barrels. It returned more aggressively sour than the original, with a very light body and a hint of funk to be found. Like the Seckel perry, it would be an interesting pair with poultry or fatty fish.

Raging Cider perries may be of limited availability but worth looking out for. Next up will be a perry blending tannic Lincoln pears and wild pears that Carr describes as “a much drier and complex perry with more white wine notes to it.” Cider cocktails on the other hand, look to be a more regular offering up there in in San Marcos.