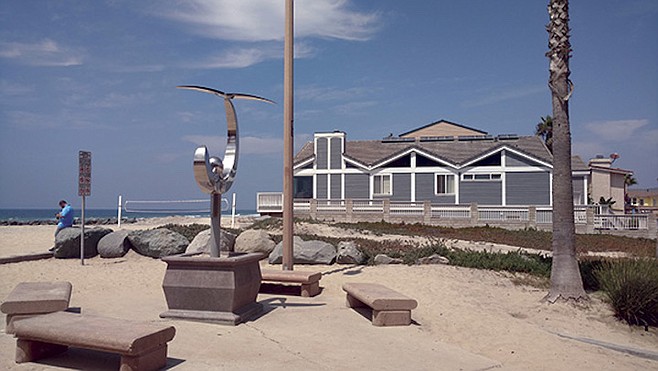 Don't say retreat when talking about sea rise in California

Who knew back in 1977, when the Coastal Act was passed, that the sea would rise so quickly? Now, cities and the agency formed to protect the coastline, must deal with it - and with each other.

A workshop on July 12 brought together the League of Cities, California State Association of Counties, local government officials, and the California Coastal Commission. Sea level rise was a key topic, along with one of the most controversial tools in the arsenal.

"The big elephant in the room is managed retreat," said Imperial Beach councilmember Ed Spriggs, who helped develop the workshop agenda, and whose low-lying community is one of the most vulnerable in California to sea rise.

"Unfortunately, we have a gap between what scientists are saying and the general population on this issue," Spriggs told the workshop. "We've got to close the gap before we can have the kind of discussion we need to have."

Managed retreat has been politicized in almost every community where it's gone into early drafts of the local coastal plan, Spriggs said. That hampers planning, with the focus turning to the taking of private property, and eminent domain.

Commissioners suggested they should change the name to make it more palatable, but by any name, retreat means homes are removed so beaches can migrate inland. And that rarely goes down smoothly with homeowners.

In June, Imperial Beach announced that the update to the current local coastal plan will not include managed retreat as an adaptation strategy. That's a different course than the city was on last November, when retreat was on the table.

Del Mar is another vulnerable city that chooses to keep the approach out of their planning.

"We've become the enemy because we're providing this guidance with managed retreat," said the commission's executive director, Jack Ainsworth. A lot of communities aren't ready for it, and that's fine but that should be built into your local coastal program going forward, with plans out beyond ten years."

From Imperial Beach to Crescent City, the diversity among coastal cities requires local solutions. Some have land lift; others face flooding. Some are rich, others poor.

"Managed retreat should not be a requirement for every local coastal plan," Briggs said. "The plan should look at flooding, overlays. But we should not have the mandate" of retreat in the program. "Within 10-20 years the resources will be available to do these things," but for now the funds and knowledge are not there.

"I really see it as a measure of first resort, not last" said Commissioner Aminzadeh. "We have limited time. We need the leadership of our local partners to offer a way forward. If we only look at hard solutions, coastal armoring, we will lose the coast we're all trying to protect."

Fort Bragg commissioner Donne Brownsey agreed, saying, "we either have managed retreat or we have unmanaged retreat. I don't think we have any other options with respect to some areas."

Spriggs thought the discussion of adaptation strategies was too polarized. "It's either hardening of protection, or managed retreat." Instead, officials should seek funding for feasibility and implementation around "soft shoreline solutions, natural shoreline solutions, dunes and straightforward sand replenishment.

"I want to talk to my constituents about this issue, and about what we do for the survival of our community. I can do that when we're talking about sand replenishment, dunes, groins. I can't do it when it comes to managed retreat."

Half Moon Bay mayor Harvey Rarback compared the rising tide to the wildfires that devoured the town of Paradise. Everyone knew such a blaze was a spark away. "I walk my dog in Pacifica, and I often find, there is no road there anymore."

Wait ten years, it will be too late. "We have an immediate crisis."

As my Pappy used to say; "Never put off for tomorrow what you can put off for next week."

I wonder who thought it would be a good idea to build a city below sea level along the coast?

developers and the fools that buy the structures

I would bet the majority of these homeowners believe the scientists when they say that humans are accelerating global warming.

But when scientists tell them that rising tides are a crisis bound to take over their property they disavow and bury their heads in the sand.

Well pretty soon there wont be any sand left.