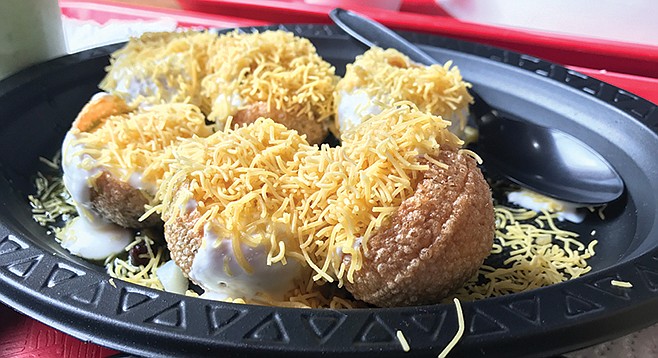 I don’t miss meat for a second

‘There’s no such spice as curry,” says Wendy. “Curry is a western invention.”

“Curry is a cooked dish using masala, and ‘masala’ means ‘a mix of spices.’ Any mix.”

Wendy should know. She’s married to an Indian, she travels there all the time. She’s brought me here to Little India, along Black Mountain Road. We’re walking among Indian grocery stores and restaurants and temples. 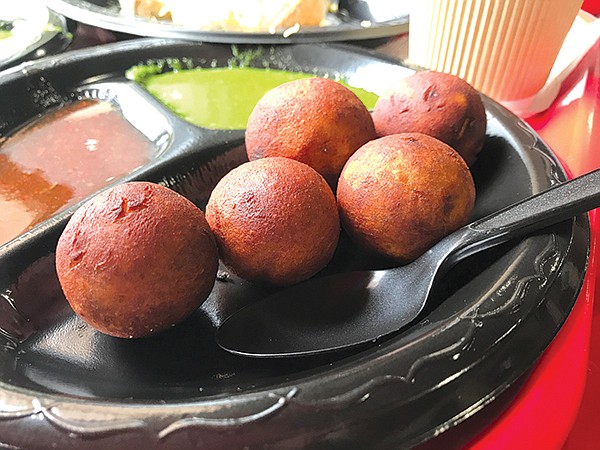 “These people are Gujarati,” she says. “From the far west of India. It’s where Jainism is strong, so everything here is vegetarian.” 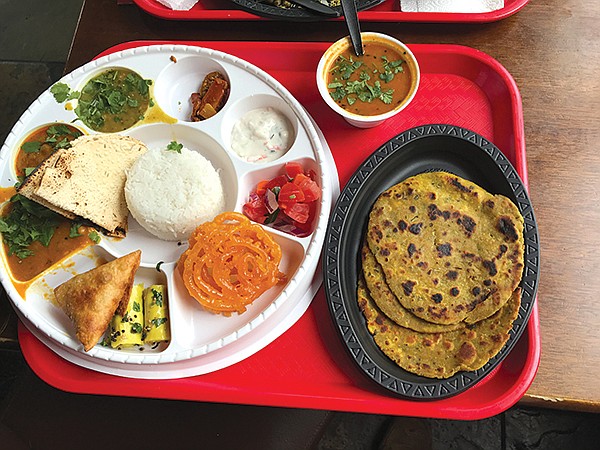 We come through Surati Farsan’s doors into a neat, light green and chocolate-colored room with brown cushioned chairs and dark timbery ceiling. A smiling goddess stands on the counter. She’s wearing a scarlet sari. Wendy says it could be the goddess Ambaji. A Bollywood dance movie’s playing on a wall screen. Kids crowd the L-shaped counter. It’s stuffed with Indian sweets and cakes. We grab menus and head for a table.

Oh man. So much to choose from, and I don’t recognize a thing. Except for samosas, and oh, dosa, the south-Indian giant crepes. But Wendy has some ideas. “For a start, we should split a thali. It’s an entire meal. It’s what they take out to truck drivers pulling into Indian truck stops, because it has a bit of everything.”

Seems an idea behind the thali is for you to get all six important flavors, sweet, salt, bitter, sour, astringent, and spicy, in one meal. 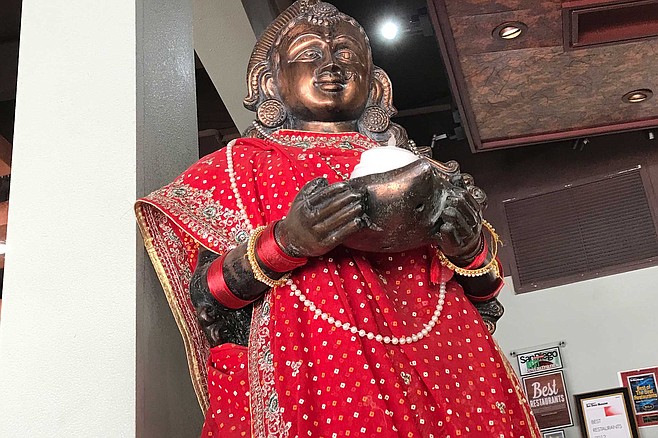 I see it on the menu now: “Thali, an Indian meal with rice, daal (kind of split pea soup), 3 vegetable curries, 2 farsan (appetizers), raita (a kind of yogurt mix), pickle, salad, papadam (the crispy circular flatbread) and dessert. Served with either 4 puris (puffed, deep-fried bread) or 4 rotis (the traditional Indian flatbread).” Costs $12.49. We could have gotten a mini thali, with just one vegetable curry, for $7.99.

But now we’re looking at the dosa section. “Masala dosa,” Wendy says. “It’s the classic. It’s stuffed with spiced-up onions and potatoes, and you get a veggie soup you can pour over the crepe.”

And natch we have to get samosas ($2.99 for two), and some petish, fried potato balls stuffed with cilantro, coconut, garlic, and crushed green peppers, all inside a potato shell ($5.50 for five balls).

But the one that’s gonna rock my day is the last thing we order. It’s in the Chaat (snack) section. Dahi sev puri. It’s six deep-fried puffy shells stuffed with beans and potatoes (you seem to get that combo a lot in Indian cooking), covered — and here’s the magic part — with sweet and spicy sauces, topped with yogurt and sev, tiny crunchy noodles, $5.50 for six. 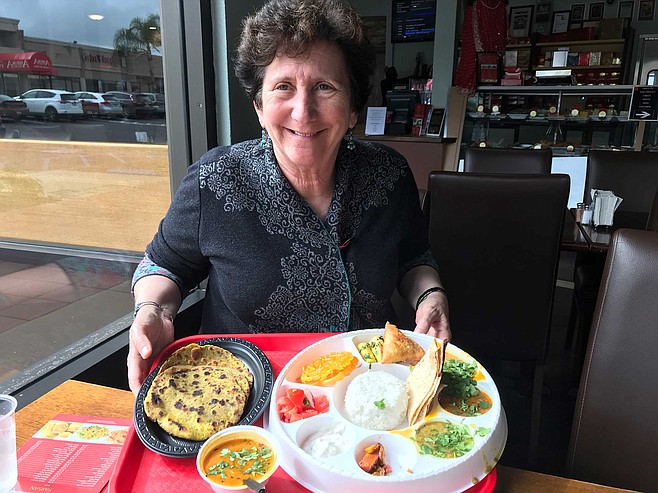 I know. We’ve over-ordered. Spent about $15 each, plus I get a masala tea (slightly spicy, $2.50), and Wendy gets the much more interesting masala chaash ($2.99). It’s a salty drink mixed with a spicy cilantro sauce. Green as the Sargasso Sea.

And we see how crazy we’ve gotten when they bring it all out. Because there are extras, like the two veggie soups for the dosas, the thepla (a soft round bread of the Jains). Then there are the three curries. Okay, none of them taste like the curry I’m used to. But then Wendy did say there’s no such thing as curry. The petish balls are really interesting to bite into; I mean, the maroon shell, then the green peppers and coconut garlic inside, specially when you dip it into the tamarind sauce or the cilantro dip.

And the dosa flute, a three-foot long rolled crepe made of thin rice and stuffed with spiced onions and spuds. You rip a piece off, dip it in the veggie soup, swipe up some of the dee-lish coconut chutney, and chomp in. It tastes slightly fermented, and oh-so light.

There’s another surprise in a couple of tiny yellow rolls, khandvi. A kind of batter with yogurt, and you can dip it in anything from chutney to coconut to mustard seeds.

But, have to say, the word of the day is “Dahi Sev Puri:” yogurt, crispy noodles, deep-fried crispy bread shell. Oh man. This snack dish, which, turns out, was born in Mumbai, is, for me, a totally new, totally delicious, sweet-savory snack that becomes a meal, because you can’t stop eating it. It’s that combo of sexy little shell, the beans and potatoes hiding inside, making for gastro surprises when they’re flooded with those sweet and spicy sauces your teeth liberate.

You need to eat up on these because the yogurt starts to soften the shell before too long. But hey: no problem. I lunge at them. It’s that sweet/sour umami balance, right down to the sev, the crunchy chickpea flour noodles, plus the turmeric, cayenne, and a bit of an anise thing going on with the ajwain spice. The complex flavors of Indian cooking? Right here. I come out of this deep dive confused, but happily confused.

We finish the meal with this sticky, wicked sweet, jalebi. It’s basically a knotty string of deep-fried batter soaked in sugar syrup. Is there an excess of bread and fried stuff in this Gujarati food? Probably. Do I miss the “curry” taste I was expecting? Well, a little. But one thing: I don’t miss meat for a second.

And I’ll be dreaming dahi sev puri for weeks.