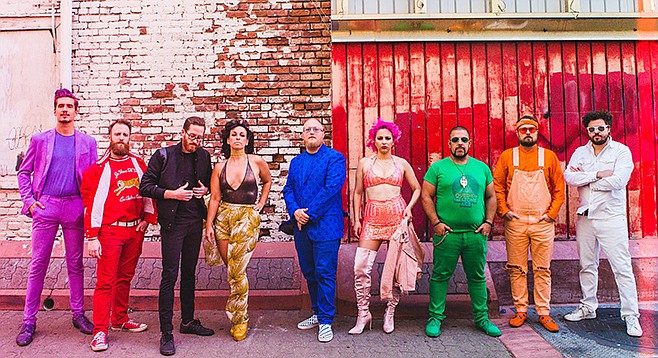 Turkuaz tend to write live and on the fly

“Dirty funk” is how one critic described the Turkuaz package. Some might call them blue-eyed funk, which is not meant as a pejorative statement. Unlike funk’s originators, Turkuaz inherited, rather than politicized a rarefied kind of music. In their own words: “Funk music is an age-old tradition. The aim of Turkuaz is to keep this tradition alive and growing.” Which makes them sound a bit cover band-ish on paper, but they are not. Turkuaz, out of Brooklyn, is all-original and about as tight as a 10-piece can get after a decade of existence.

Original funk is ‘60s era sound that put jazz back on the dance floor by couching it with R&B. Funk was a reaction to a time and place. James Brown jumped out in front of that racial divide with his highly syncopated party music that launched on a strong downbeat — on the one, as Mr. Brown explained it.

The traditional funk band sound starts way down in the basement of the sonic scale with the marriage of electric bass guitar and kick drum in a rhythm pattern that pumps like an off-kilter heart. As such, that groove machine aspect of original funk was not lost on Turkuaz, who are better suited for a dance hall or a festival than a sit-down venue.

Turkuaz band members describe songwriting as a collaboration. Their process starts with a rhythm pattern or a riff, then a horn fill. Words are written after the song lines are cemented. Turkuaz (it’s Turkish for ‘turquoise’) say they tend to write live and on the fly, since rehearsal time is scarce due to the bondage of day jobs. But the members are on a mission. From their bio: “To dance is a protection, funk is your connection, so don’t forget that shit.”