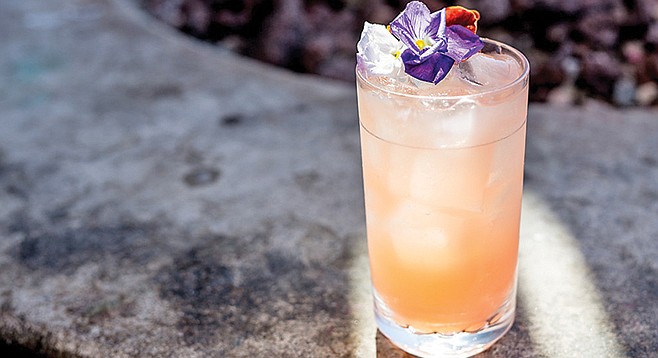 Fruits, nuts, and flowers instead of Glocks, gin, and blunts

Pacific Beach Alehouse is brewing up more than beer on its menu these days, says Pacific Beach bartender Sierra Berryessa. The surfside suds factory still spins its palate wheel of beers and ales, Berryessa says, but it has also pimped out its menu with a new posse of cocktails, including the Daisy Me Rollin.’ The cocktail’s name riffs on Chamillionaire’s “They See Me Rollin,’” but instead of Glocks, gin and blunts, the Daisy Me Rollin’ sings with fruits, nuts and flowers.

“Grapefruit, almonds and roses,” says Berryessa, describing the multitudes that Daisy Me Rollin’ contains. “It’s refreshing and light, with a hint of sweetness at the end. First you get the citrus—the grapefruit and the lemon, and then the rosewater taste, and it finishes off with the sweetness of the orgeat.”

“When the Ketel One botanical vodkas were first released,” she says, “they had a cocktail competition and the Daisy Me Rollin’ was one of the recipes I was toying with. I really wanted to make something that was refreshing and approachable for everyone. I also really wanted to showcase a drink that has a floral flavor.”

That floral flavor, says Berryessa, teams up with the lemon and grapefruit to tame the orgeat, with a balance as delicate as, well—a flower.

“Because there is a lot of citrus in the drink, you don’t want to overdo or underdo it,” she says. “It is a sweet drink with the orgeat, but the citrus helps balance the cocktail. So you want to make sure you get the citrus right in terms of proportion—too little is two sweet, and too much, too tangy.”

“The Ketel One Grapefruit & Rose is clearly the main ingredient that gives the drink its floral tones,” Alizzi adds. “However I believe that the orgeat also plays a large role in giving the drink the extra little punch. And the daisies on top sure do make it beautiful.”