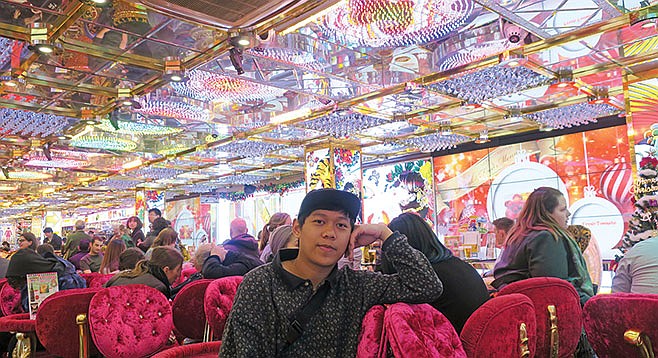 “When I first heard about it, it seemed very, very odd,”

For the first seven albums he’s appeared on, bass player Grant Glibert did what most local artists do. He and his bandmates in four different bands (Splavender, Slay Dean, Big Bloom, Citrus) ponied up their own cash to press CDs or cassettes which they then sold or gave out for free.

But his eighth local album, by his latest band the Shindigs, was released by an L.A.-based label that has over 100 well-known artists on its roster, including Yes, Joy Division, BB King, Berlin, Ozomotli, and New York Dolls. That label, Cleopatra Records, put out the Shindig’s album Chilland on both CD and vinyl last month and is paying for independent companies to support it with radio promotion and media publicity. The Shindigs didn’t have to pay up themselves to get the discs out.

“When I first heard about it, it seemed very, very odd,” admits Glibert about the bountiful record label attention. “My first question was ‘How did they find you?’”

Glibert posed the question to Shindigs bandmate Beejay Buduan (Clockart), who wrote, arranged, and sang lead on all Chilland songs. Buduan told him Cleopatra simply called him up out of the blue and asked him if they could release the collection of songs he recorded on his laptop.

“We heard about [Shindigs] from activity on Spotify and Bandcamp,” says Cleopatra Records’ Benny Cardenas. He explains that the label founded in 1992 was once known exclusively for punk and metal but now maintains a diverse roster of artists, including new material by up-and-coming bands and classic, reissued catalogs by inactive veterans. “We reissue recordings we have purchased from estates [of artists]. We recently acquired music from [late blues great] Junior Wells.”

But Cardenas stresses Cleopatra is also interested in discovering and developing upcoming artists like L.A. neo-psyche rockers United Ghost or San Diego’s joyful indie-pop quartet the Shindigs, which they signed in October.

“We invited the Shindigs up to play a showcase at our Cleopatra Records Christmas party at the Viper Room... to play with David Hasselhoff....William Shatner was there, because we released his Christmas album, but he didn’t perform.”

Cleopatra Records’ interest in the band revolves around the buoyant indie-pop tunes created by Buduan, a 2012 SDSU finance grad who played in high school emo groups and an indie band named Clockart. Buduan emigrated to San Diego from the Philippines with his parents when he was four. He says he spent four years teaching English to children in Korea because he didn’t connect with his finance job he got after graduating college.

“I wanted to travel and experience something new. I lived in San Diego for most of my life. I got to know Korea, because I had studied abroad there for a month.” Buduan says the Korean teaching job he took in 2013 paid him $325 a month. “I made a lot of friends. It really opened my eyes.” He says the low cost of living and Korea’s friendly culture kept him there longer than expected. “I went for one year, which turned into another… after four years, I finally got over it, and I came back in 2017.”

He says he found fellow skaters in Korea but didn’t connect as well with local musicians. “I played a lot by myself and a looping pedal.” He made demos where he played every instrument. “I missed playing with friends.” The originals he created in Korea seemed to have equipped the Shindigs with a nice set list when he came back.

The Shindigs, which include drummer Anthony Batista and keyboardist Zach O’Reilly, appear February 24 at the Ché Café, along with Crumb and Video Age.