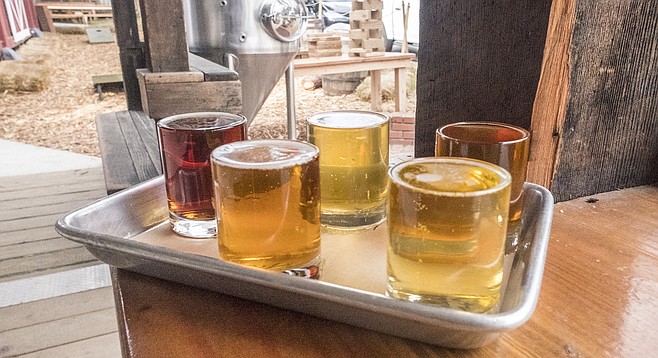 About 55 miles separate the communities of Solana Beach and Julian, but it’s the four thousand feet in elevation that set them apart. One's a beach town, appealing to ocean-lovers and well-heeled shoppers; the other, a mountain destination valued by snow-seekers and apple pie aficionados. But as of last summer, they share at least three common traits: pizza, beer, and a Marsaglia-owned business serving both.

Vince Marsalgia made an indelible mark on San Diego beer as cofounder of Solana’s Pizza Port Brewing, its subsequent expansion brewpubs, and spinoff brewery, Port Brewing and The Lost Abbey. The recently opened Julian Beer Co. serves beer from all of the above brands (including Lost Abbey’s Serpent’s Styout, also offered with vanilla ice cream as a beer float). From a beer fan’s perspective, the availability of such beers alone may be counted a huge win for the Cuyamaca mountain town, which numbers only 1500 residents. But of course, Julian beers are brewed on site.

Now, it will be tempting to confuse Julian Beer Co. with Julian Brewing Co., which Marsaglia previously partnered with brewer Tom Nickel to launch at the same location in 2012. That brewery, and its associated restaurant, Bailey Wood Pit BBQ, closed a couple years ago, giving way to a remodel and subsequent rebrand. The new edition has a similar feel, residing in the same rustic, 1876 building (2307 Main St., Julian), and reportedly retaining the same Pizza Port alum, Matt Pitman, as head brewer. 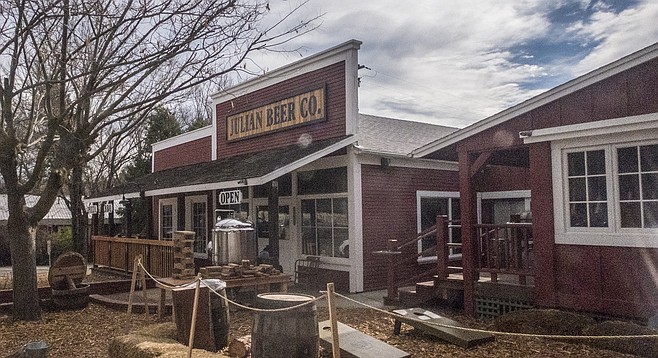 If there’s a major difference, is that it’s now easier to conflate Julian Beer Co. with Pizza Port, especially given the restaurant’s new menu features pizza in addition to BBQ. Much like Pizza Port, it’s a counter service restaurant, with a casual dining room featuring communal, picnic table seating, and an outdoor patio outfitted with bar stools.

But rather than surfer décor, Julian Beer Co.’s walls are hung with cast iron cookery, surrounding a vintage wood fire stove. Rather than coastal vibes out the front door, there sits Julian’s Main Street, strolled by daytripping tourists and horse-drawn carriages.

Perhaps it’s only due to these surroundings that I noticed my flight of beer offered a palette of autumnal colors. The brown, amber, orange, and gold hues don’t specifically differ from beers served at Pizza Port, but drinking here in the vicinity of trees, and breathing crisp air that lacked even a hint of seawater, I couldn’t help make the outdoorsy association.

Perhaps the piney citrus of that pale drove home the Pizza Port comparison — it’s so easy to imagine similar beers being served across the bar of Solana Beach twenty years ago.

This place may lack the award-winning history or beach weather that has made Pizza Port a favorite San Diego beer destination year after year. But then, Pizza Port has never served any food items as good as Julian Beer’s brisket. But I’d wager anyone who loves a good visit to Port locations in Solana Beach, Carlsbad, and Ocean beach will appreciate Julian Beer Co., whether the point of driving east is to see snow, pick apples, or simply to escape the marine layer.