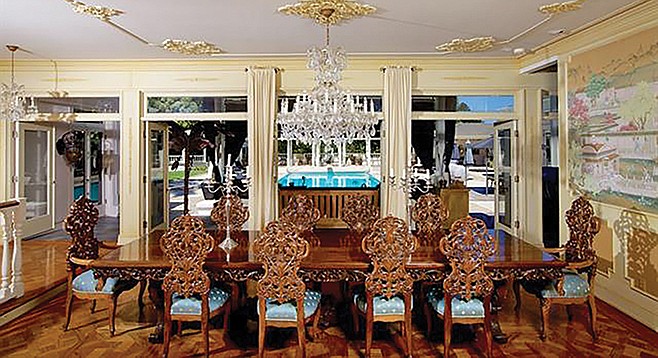 Rosecroft is a historically-designated estate occupying nearly two-and-a-half acres atop Point Loma. Built in 1912 by architect Emmor Brooke Weaver, who oversaw the design of dozens of local residences between 1904 and 1945, the Italian Renaissance mansion includes nine bedrooms and 12 baths spread across 15,600 square feet of living space in the main residence and outbuildings. 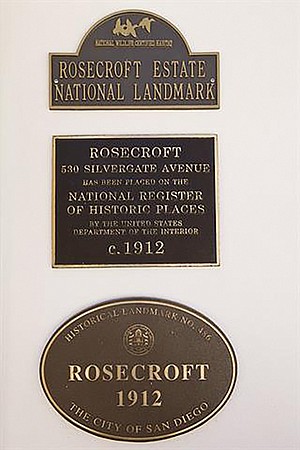 The largest remaining residential parcel in Point Loma, Rosecroft’s grounds were purchased in 1903 by heiress Marion James Robinson and her husband Alfred. The Robinsons were drawn to the area by Katherine Tingley, leader of the spiritual Theosophy movement. At the time, Tingley was endeavoring to create a new utopian society known as Lomaland on the peninsula, many buildings and gardens from the era remain as a part of the Point Loma Nazarene University campus.

The home itself includes detailed finish work of the era, including coved and coiffured celings, hardwood floors, a wood-paneled library with ornately-carved fireplace mantle, formal dining with seating for ten, tile-finished archways, and a covered patio with gas firepit on the edge of the pool deck. There’s a gym with an indoor racquetball court, attached garage with parking for three limousines, and separate detached garage with parking for another four cars, along with a guest cottage. The home’s second story offers a view of the downtown skyline and a peek into San Diego Bay to the east.

While the estate retains its historic charm, a previous listing notes that major renovations were undertaken in 1979, including the addition of the finished basement along with a home theater and wine cellar, the gym, and a private tennis court. A solar power system has been added more recently. 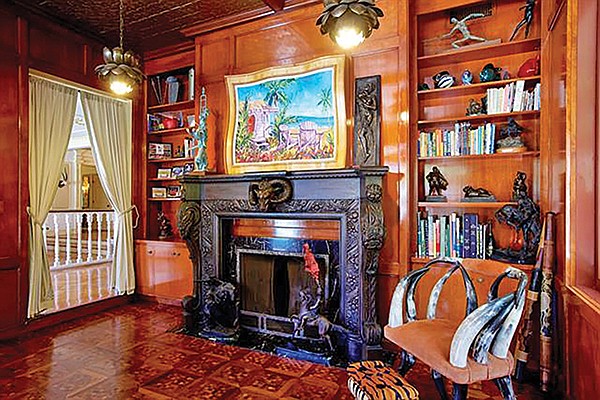 Library: why even have a mantle if it’s not going to be ornately carved?

The grounds also include expansive patio areas with pergolas and statuary, along with nearly an acre of manicured lawn, which the listing suggests could make the property useful as a wedding venue or bed-and-breakfast for a new owner.

The home has had its share of famous visitors: Jimmy and Rosalynn Carter once attended a Habitat for Humanity fundraiser on site, and Ronald Reagan announced his first candidacy for governor from the mansion’s front steps. Current owners Scott and Mary Clifton have in the past allowed the house to be used for a host of other charitable gatherings.

It’s unclear how much of the original landscaping remains, but the Robinsons were founders, along with Kate Sessions, of the San Diego Floral Association. Alfred, an amateur horticulturist, is reported to have bred more than new 100 varieties of begonias at Rosecroft, and following his 1942 death, the Rosecroft Begonia Gardens were opened to the public and served as a tourist attraction until the 1970s, when portions of the grounds were sold off and subdivided for new residential construction.

Who owns it now?