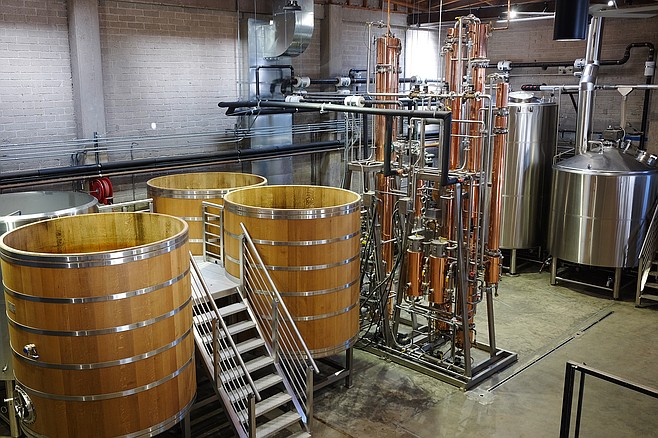 The continuous still of Storyhouse Spirits

East Village's shiny new distillery was made to make whiskey

San Diego’s newest craft spirit maker opened for business in early February, updating a vintage industrial space in East Village. In lieu of tasting room, Storyhouse Spirits offers an appealing bar and restaurant, with a mezzanine lounge, but nothing’s quite so impressive as the elegantly designed stainless steel, copper, and oak construction of its back-of-house distillery.

A complex network of pipes and tubes convey barley, wort, beer across the space, like a sophisticated Rube Goldberg device that illustrates the concept of grain to glass spirit making. Forty-barrel stainless steel tanks turn malt into wort on one side of the vast room, while open-top oak foedres on the other side ferment it. A 200-gallon pot still near the center of the room looks like the main attraction, but that will only be used to make small batches of gin. Most of the booze will be made in shiny copper columns of Storyhouse’s highly efficient continuous still, which can distill forty barrels of beer in just over eight hours. 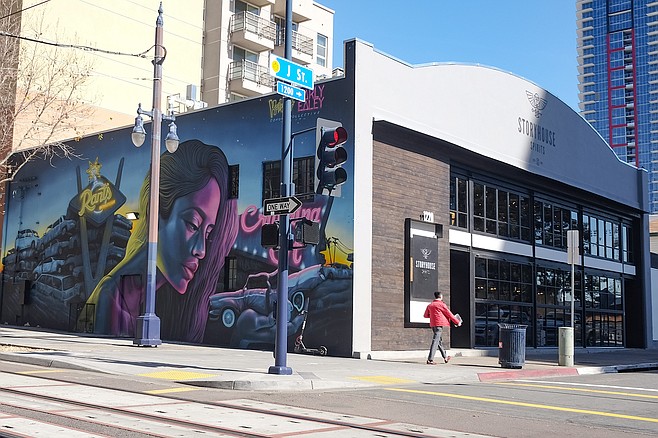 Storyhouse Spirits, site of the Cohort Collective's "Crushing It" mural.

The whole rig, from grain mill to still, is designed so it may be operated by one person, and that person is Matt Kidd, a former Marine helicopter pilot whose homebrewing hobby eventually developed into an interest in making whiskey. Kidd partnered up with Steve Kuftinec, the former vice president of sales of Utah’s Uinta Brewing Co., the nation’s 37th largest craft brewery. In addition to Storyhouse distribution and sales, Kuftinec has taken the lead setting up the restaurant, which serves sharable plates intended to support the brand’s premise: that of people gathering to share stories.

Kidd pursued spirit making at craft distillers around the country, including time spent at Minnesota’s J. Carver Distillery. That’s where he filled 50 Minnesota white oak barrels with the Storyhouse bourbon and rye currently aging in a barrel facility in Kearny Mesa. Those have been aging about 17 months, and it will be some time before Storyhouse starts serving them. “I’m not quite satisfied yet,” says Kidd, “I need a little bit more mouth feel, so I’m anticipating something in the neighborhood of another year.”

For its grand opening, Storyhouse didn’t have any house-made spirits to serve, instead making cocktails with guest liquors. Kidd will take his new distillery on its inaugural run within the next couple weeks, and expects to bottle gin and vodka by then of March. Eventually, the stock will include rum, agave spirit, amaro liqueurs, even house mixers. “Everything that goes into our cocktails,” Kidd notes, “will eventually be made in house.”

But Kidd’s true long-term focus is whiskey. Along with bourbon and rye, the Storyhouse specialty will be American single malt whiskeys, made using barley from boutique Northern California maltster Admiral Maltings. Kidd mentions they even have four reserve acres earmarked for an heirloom bourbon.

That will be a story for another time.