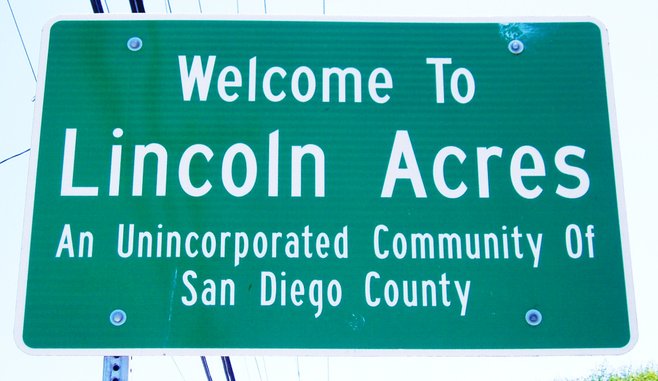 One of last three islands in San Diego County

Lincoln Acres doesn't want to be National City. But sitting on the edge of a growing urban area means sooner or later, Starbucks is coming. To the county, it's a good time to "measurably reduce" the unincorporated island "and its associated service inefficiencies." 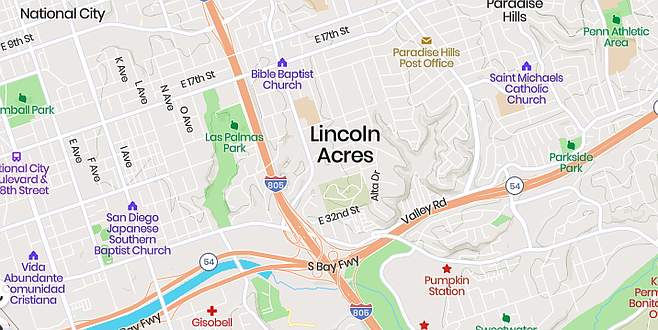 For its part, National City doesn't want to be everywhere else. But a new commercial strip center with a drive-through Starbucks, in a spot that straddles both communities, will close the loop, stitching together lots and boundaries – and residents who don't like the idea.

"I'm just curious as a resident, what will be happening to me, what are my options?" asked Nicolas Ortiz Blas at a public hearing before the project was approved. Blas, a long term tenant of a home in Lincoln Acres that will be annexed into National City, was just hearing about the proposal.

The 5,500-square-foot commercial hub on Sweetwater Road, east of Interstate 805 and north of state Route 54, won't bring any new housing, despite being rezoned from small lot residential to mixed use. "We have a community that is experiencing a housing crisis," said National City resident, Janice Reynoso. But the city was trading homes for commercial space.

"Day of the Dead, it is bumper to bumper traffic," warned resident Alisha Morrison.

To enable the project, the planning commission in 2017 initiated rezoning the land to a major mixed-use district. Before that, 60 units of new housing could have been built, said the city's principal planner, Martin Reeder. "Any time you rezone a property, you reduce the ability to have housing. Basically this is just going to be a commercial property."

At least for awhile. "Rezoning will help spur development in the area," he said. "There is ability to have a mixed-use project in the future" to provide more housing. "But obviously that's not going to be the case in the interim."

Ken Murakoa, one of the developers, said four of the properties have been in the family since 1986. "Mostly because there's been that division, with the county on one side, and the city on the other side."

They considered housing, he said, but it wasn't a good fit. "To have a commercial place, and have housing there, it would be intrusive," he said. Back when these properties were developed in the 40s and 50s, "there was no 54 freeway there, no 805 there, and those are very unfriendly, unfamily" things.

"It is kind of shocking that there isn't a set crosswalk or lights there" on Sweetwater road.

Councilmembers agreed that the location isn't the best for housing since it's right on the busy road.

Murakoa said a partner on the project, "who looks for a use for these kinds of properties, found us Starbucks. We like that. It would provide an anchor on such a small property."

All of Lincoln Acres falls into National City's "sphere of influence" but since it's in the county's jurisdiction, the Sweetwater Road Reorganization had to go before the Local Agency Formation Commission after the zoning and land use changes. On December 2, the Commission approved the annexation.

It includes county service area No 135 for emergency communications and Lower Sweetwater Fire Protection District, also being detached to National City which will provide the services.

As one of three county Islands, which the county calls "small, non-contiguous unincorporated areas surrounded by the cities of San Diego and National City," Lincoln Acres is always on the edge of change.

Mostly, the change comes from outside. The islands – Miramar, Greenwood and Lincoln Acres – "consist of a horsebreeding stable, a portion of a cemetery, and single-family residences and cemetery respectively."

No planning groups represent the county Islands, no planned commercial or industrial lands are located there, and existing agricultural use is considered incompatible with surrounding uses.

In the end, Lincoln Acres is likely losing more acres than planned. The developer sought to annex about a quarter acre. The commission recommended an additional modification to tame another 50.5 acres of "adjacent and uninhabitated land entirely owned and used for public purposes."

The land, adjacent to the I-805/SR-54 interchange, is recommended "to conform with the city’s incorporated boundary."

A map would help here. I've read through the piece and am not clear. But I do have some awareness of the area, in that my wife's uncle and aunt worked in Lincoln Acres back in the 50's and 60's and built a new, hilltop house there in the early 70's. As for the residents, it's a dilemma of which is worse: benign neglect by the county government, or being absorbed into NC. Both prospects are rather bleak.

The statement about the Lower Sweetwater Fire Protection District being "detached" to National City is a puzzle. "Attached" might be a better choice of words. And then there's the comment that an attempt of a property owner to annex a quarter acre of land (?) to NC and having it end up with a proposal to annex over 50 acres. Howzat? We need more info than provided.