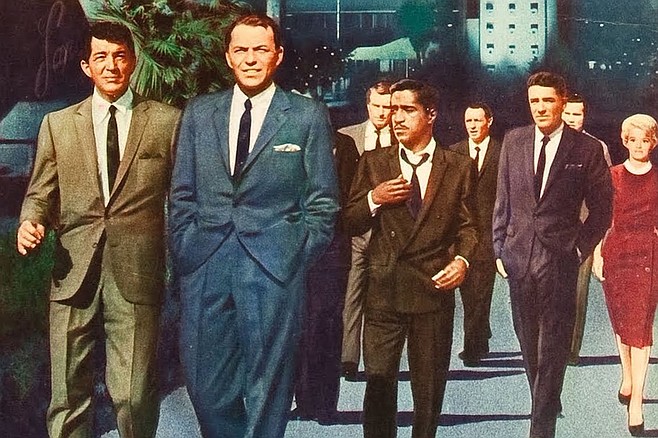 Sinatra was allergic to retakes

Frank Sinatra and a group of Korean war buddies regroup to knock over the five major Las Vegas casinos at the stroke of midnight on New Year’s Eve in style. That’s style as in sartorial nuance — freshly mowed alpaca sweaters, pocket squares that never match neckties, tuxedos by Sy Devore, etc. — as oppposed to telling a story with pictures. Warner Bros. never struck a 35mm print for revival bookings, and it wasn’t until the film made its debut on DVD that many of us saw it in the widescreen format for the first time since its initial release. Sinatra was allergic to retakes, making it impossible for director Lewis Milestone to fret over formal finesse. In this case, the Telecine op did Milestone a favor by trimming the wasted side space. The titular superfluity of swingers includes Chairman Sinatra; Dean “Barometer of Hip” Martin; Sammy Davis, Jr. (a garbage collector whose truck is cleaner than most people’s homes); Joey “Putting Green Maned” Bishop; Richard “Big Casino” Conte: a torturously post-synced Akim Tamiroff; Richard Benedict (a bald guy nicknamed “Curly”); Clem Harvey as the gang’s resident Mormon cowpoke; the power of Norman Fell; the perpetually outranked Peter Lawford; a whipped Buddy Lester; and the divine presence of Henry Silva. As Duke Santos – Lawford’s fortunate step-father and the man responsible for the caper’s eventual undoing – Cesar Romero out-cools all eleven hipsters combined. Angie Dickinson holds her own as Sinatra’s ex, but for the most part, this primer on misogyny is stocked with decorative hot and cold running broads, eager to give instant neck rubs and quick to listen after the first “beat it.” Not wanting to lead your expectations in the wrong direction, I’m hesitant to mention it was photographed by Garbo’s favorite cameraman, Lee Garmes. At least what’s basically an excuse for Sinatra and his pals to have a swinging’ time on Warner Bros. dime concludes with a powerhouse plot twist. Ain’t that a kick in the head?

For his unofficial sequel to Rock ‘n’ Roll High School, director Allan Arkush fashioned a slapstick homage to that cherished the twinkling time of his youth spent ushering at Bill Graham’s celebrated Fillmore East concert hall in New York. We open on December 31, 1982, with the crew at rock impresario Max Wolfe’s (Alan Goorwitz, nee Garfield) Saturn Theater (doubled to perfection by Los Angeles’ Wiltern Theatre), preparing for the biggest New Year’s Eve bash in venue history. The cast boasts an eclectic gathering of personages, musical and otherwise — from teen idols Fabian and Bobby Sherman, Lee Ving (unforgettable as head-banging punker “Piggy”), and jazz man Bill Henderson vamping Muddy Waters, to a Dylanesque Lou Reed, stuck in a taxi and in search of the lost chord. There’s even an appearance by everyone’s favorite retro-couple, Paul Bartel and Mary Woronov (Eating Raoul’s The Blands). In the film’s most savage putdown, Macolm McDowell guest stars as an aging, zonked-out rocker (rhymes with “Stagger”) who, in one scene, has a hilarious heart-to-heart with his penis. If a film’s greatest act of ungodliness is trying too hard, Get Crazy is a sinner’s paradise, a joke machine spewing tasteless antics and bits of dope humor, many of them flying faster than they can land. So: other than a VHS release, why hasn’t this film been made available on home video? One guesses the cost to clear the music rights would amount to more than it’s worth. From what I gather, I was one of the fortunate few to see it during its limited release. According to IMDB, the film was financed along the lines of Mel Brooks’ The Producers. A tax shelter trick-deal saw to it that the picture “didn’t need to be released and was designed to lose money so that others would make money.” The YouTube copies are muddy to say the least, but any port in a storm, right?

I'm with you on Get Crazy. If it weren't for the early days of cable, I never would have seen it. No mention of the "Blind-Something" blues men at the funeral? The most WB cartoon moment in the movie.