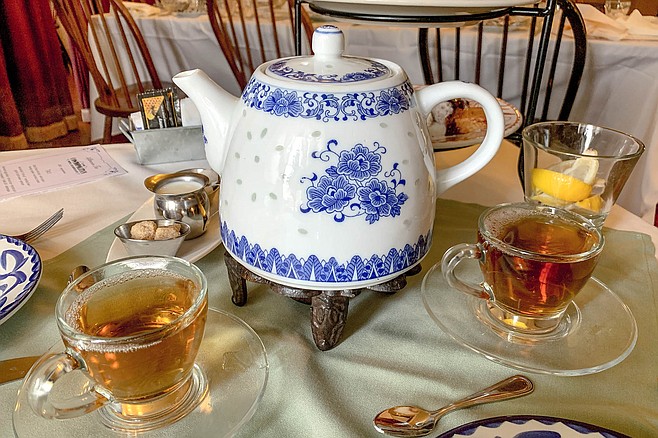 Walking around Old Town last month, I noticed a sandwich board sign advertising afternoon tea at the Cosmopolitan Hotel. That’s the proper, British-style afternoon tea, complete with a big ceramic pot and a three-tier platter stacked with finger foods, the whole shebang, for $25 per person.

Having developed a latent fascination with tea service, I was eager to try it; I just needed an occasion. Apparently, afternoon tea is a popular booking for bridal showers and even the occasional kid’s birthday party. But the prerequisite seems to be that tea is a chatty affair; it doesn’t take a group, just someone who can keep up a conversation between nibbles and sips. For my part, an overdue catch-up with a dear friend proved just the thing. I called the hotel restaurant to book the reservations. 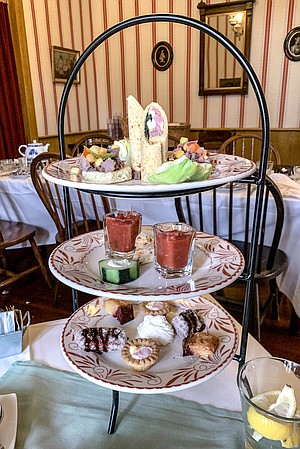 The reservations have mostly to do with getting a head count for those finger foods, traditionally stuff like crustless sandwiches, scones, and pastries. Our triple platter arrived set with nine distinct morsels of food for each of us, so there’s clearly a need to prepare these in advance. On the top tier, the Cosmopolitan offered three twists on the classic finger sandwich: ham and cheese, with spinach, rolled up in a slice of crustless bread; egg salad, service in a lettuce cup; and what it calls an “open faced brioche,” a round slice of crustless brioche, topped by diced skirt steak, mango salsa, and avocado cream. The latter’s similarity to a tostada seems fitting enough, given this Victorian styled two-story hotel was originally built 190 years ago as a single-story adobe manor, the Casa de Bandini, home to a wealthy and powerful Californio cattle man. 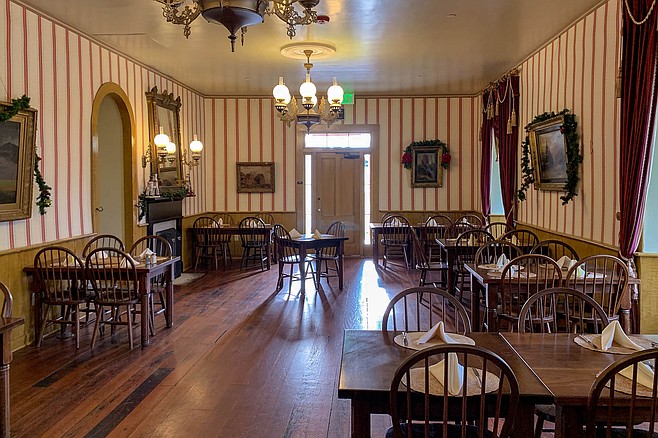 A Victorian-style dining room at the Cosmopolitan Hotel restaurant

From a short menu of black teas, green teas, and herbal teas, we were asked to pick our first option, of two or three, depending on our preference. We started with a pot of assam tea, black tea made from tea plants grown in India, and only partly because we thought it was funny to order “awesome” tea. 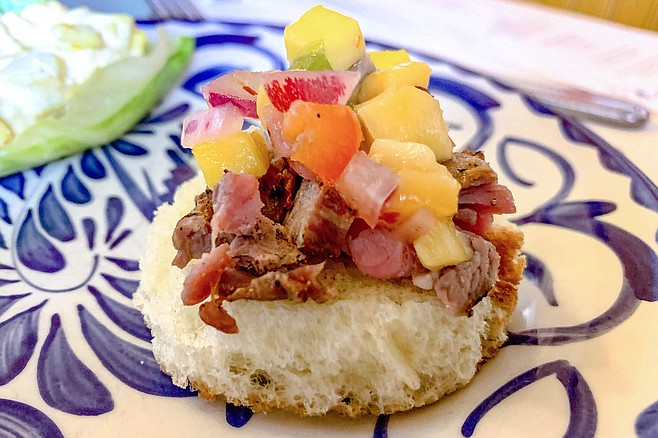 With three tiers of food and three options for tea, we might have tried pairing each tea with each tier of food, but I don’t think there’s any specific etiquette about that, and anyway, we got too caught up in conversation, finding ourselves about halfway through our food when teapot number two arrived: sencha, or whole leaf, sun-grown, green tea. Like the first, it showed up in a heavy, blue and white ceramic pot, taking its place on a heavy, iron stand at the center of the table. 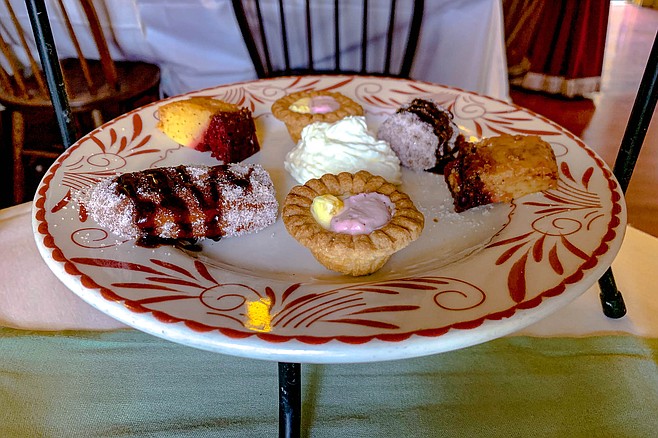 I was already nibbling through the treats on the second tier, including gazpacho and a thick, hollowed-out slice of cucumber filled with a salmon and dill crème fraiche. Here was the scone I’d expected, though like the brioche it loosely referred to Old Town’s Spanish-Mexican history, flavored with roasted corn and manchego cheese. I dipped the scone in the shot of cold, tomato-rich soup. 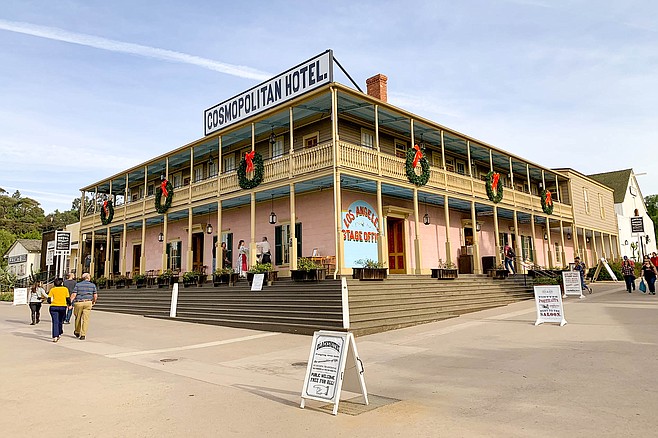 The Cosmopolitan Hotel in Old Town

We both finished the sweet pastries on the bottom tier before our third tea arrived. There was a mini pie of blackberry and mango mousse, a sticky and soft red velvet flan, and my favorite morsel of the whole lot: a mini churro covered in chocolate drizzle. The caffeine of the first two teas had done its part, and our chat was spinning in wild directions when the waiter returned for our third tea order — making me glad we had the charming, wallpapered room to ourselves! To finish out, we settled on a mango herbal tea, adding warm refreshment as we wound down the hour.

The food was more fun than great, but the time we enjoyed was both. I suspect afternoon tea is more about the company you keep. But then, as I left Old Town to walk back to my car, I noticed another Victorian, afternoon tea destination in lovely Heritage Park. That will be for next time….