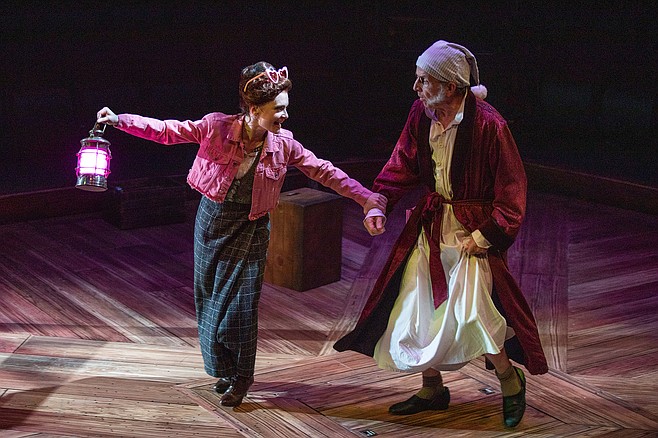 There’s a reason it’s not called A Christmas Carol

The holiday season is a fine time for recalling the way that familiarity breeds…well, if not contempt, then comfort. If a thing sticks around long enough, it’s easy to forget the revolutionary, shocking, or even just moving aspects that made it sticky in the first place. It becomes commonplace. You could start with the Nativity and its notion of a virgin giving birth to a human who is also God, but there’s no need to get all theological about it. It’s a Wonderful Life has been a holiday TV staple since the ‘80s, and oh yes, that’s right, it’s the story of a depressed and ruined family man preparing to end his life on Christmas Eve. Merry Christmas, everyone! And then there’s A Christmas Carol.

My first encounter with Charles Dickens’ famous ghost story was the 1984 TV movie starring George C. Scott; not the greatest version, but when The Ghost of Christmas Yet to Come pointed his bony finger toward the snowy gravestone, I was properly terrified right alongside the old miser Ebenezer Scrooge. Spoiler alert: the grave awaits. Live accordingly.

That was 25 years and at least a dozen viewings of A Muppet Christmas Carol ago. (Talking of which: that version casts a splendid spell: the simple presence of Kermit & Co. adds a dollop of whimsy and a heaping helping of wonder to keep the story from getting too familiar. If you loved the Muppets as a child, you never quite cease to experience the story the way a child might: wide-eyed and defenses down. Yeah, yeah: Ok Xer.) So, what’s a modern theatrical production to do with a story most everybody knows by heart? Just now, San Diego offers a range of responses to that question. There’s the straight-up A Christmas Carol at Old Town’s Cygnet Theatre. The presumably nostalgic A Christmas Carol: A Radio Play at Oceanside’s Sunshine Brooks Theatre. The naughty Victorian farce Scrooge in Rouge at the Ocean Beach Playhouse. And somewhere south of the first but north of the last, Ebenezer Scrooge’s Big San Diego Christmas Show at the Old Globe’s Sheryl and Harvey White Theater.

Playwrights Steve Rosen and Gordon Greenberg (Greenberg also directs) have decided that if some familiarity is good, then more is better, and set Scrooge’s story right here — on the very spot where the theater stands today. And while they keep the setting in olden-days 1919 — the better to preserve the mutton chop facial hair, the top hats, and the lack of furnace heating — they’re happy to go present-day for the sake of a joke. (Not for nothing does the Ghost of Christmas Present exhort Scrooge to “live in the now, girl.”) Ghosts are described as hard to find, “like parking at Trader Joe’s.” Society dames are presented as Lady Footlocker and Lady Antebellum before the revelers at Fezzi’s Wigs are encouraged, “Let’s get wiggy with it.” They go meta, they go silly, they go clever — they go for the funny bone.

Except when they don’t. Because while you can play Tiny Tim for laughs by making him a puppet with a live human head — just one clever bit of prop work in a production that makes the absolute most of a few crates, chairs, ladders, and window casings — there’s only so much humor a feel-good show can get from the plight of a dying child. Or, for that matter, the haunting of an old man’s loveless heart. The cast here is thoroughly professional, and it’s to their great credit that they’re able to execute the massive shifts in tone when the rim-shot rat-a-tat of jokes must subside and let the story’s pure sentiment shine through. (No matter how madcap the proceedings, lead Robert Joy keeps Scrooge a character and not a punchline.) But it can be a bit disconcerting for the audience.

Unless. Unless Rosen and Greenberg are terribly smart about what it is they’re doing, and I’m just an old fuddy-duddy. Unless they’re right that what the audience wants is not to go on the emotional journey of A Christmas Carol, but rather, to curl up under the weighted warm blanket of comfort that comes from seeing a comedic riff on something familiar, made even more familiar by the local color of the comedy. The play has to keep the sincere moments, but really, they’re just part of the scaffolding that supports the narrative, which in turn supports the jokes. It’s no accident that the show ends the way it does: not with the redemptive end of Scrooge’s story, but with a celebration of theater and the community that makes it possible, gaily decorated with seasonal songs and finery.

Oh bah, humbug — which the show posits as French for “Get a life.” Reading over what I’ve just written, I sound a little Scroogelike to myself. Stingy and exacting. It’s the holidays! It’s a good time at the theater! It’s exactly what you would expect from a play advertised by the image of a man in formal dress gazing out to sea with a surfboard under his arm. Did I leave with visions of Charles Dickens’ spirit returning to lurk in the shadows created by the center-stage Ghost Light and curse the show that made merry with his story? No. I left smiling. A little bemused, but smiling.