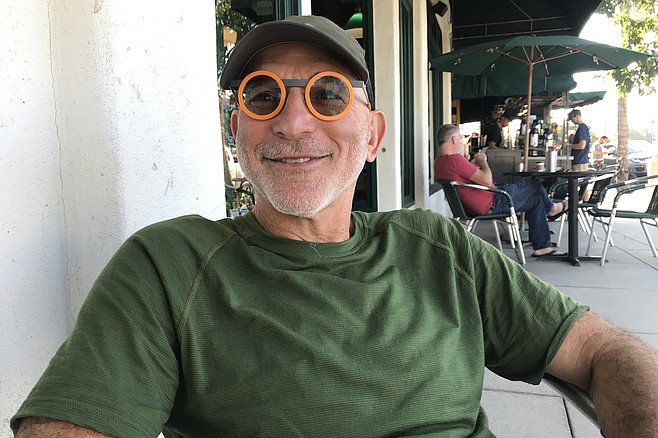 Riding a bike from Canada to Mexico in 27 days

“I’m waiting to see what the universe has to offer.”

“Whew,” says Dan Laster. He flops into a chair at the Cafe Madrid in Coronado.

“Riding a bike from...Canada? How long did that take?” 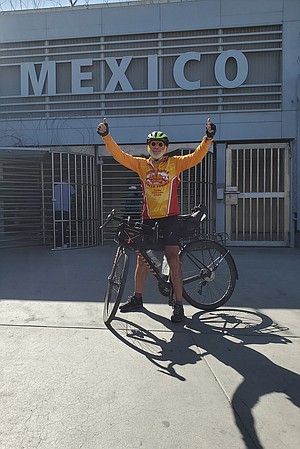 Laster says it took him 27 days. “That was to ride 1750 miles, the route I took. Before that I rode up the East Coast, from Key West, Florida, to Montreal, Canada. That also took me 27 days, and yet I traveled 2140 miles, nearly 400 miles further. So yes, the West Coast is way harder. Especially Oregon to California. So tough. Those Santa Ana winds. At one point I was averaging 6 miles per hour. It should have been at least 20 miles per hour. Grit in my teeth drove me crazy. And the Olympic Peninsula: Cold! Driving rain. But then you come to, say, Malibu. It’s way more beautiful on this coast.”

So we chat on. The guy is 61. Law professor. And what a golden life. In his twenties, he lectured at Otago University in New Zealand. His thirties he spent protecting the Windows trademark and other Microsoft patents. In his forties, he restored old houses around Seattle and established a master’s program in intellectual property law at the University of Washington. In his fifties he became general counsel for the non-profit Path health organization. The one bump in the road: A decade ago, “I realized I was gay. It was very tough for me, my wife, my kids. But I needed to be authentic.” 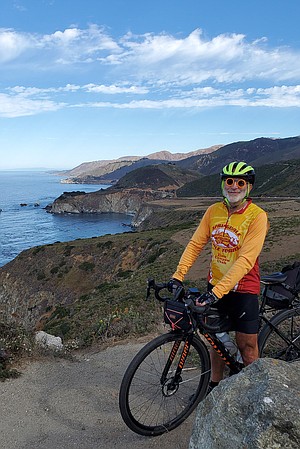 I ask what his feelings are, having bicycled both coasts of the U.S. “I am in a state of gratitude that I did it. And what was so wonderful was that my son Zach rode with me from Canada to Oregon. Every father should do that. California was so tough, but incredibly beautiful. The Central Coast, the Redwoods. All the time I couldn’t help singing ‘This Land Is Your Land!’ out loud. Last day, I started at 5 am in Redondo Beach, and I was determined to reach Coronado in one day. I did! Rode 120 miles.” 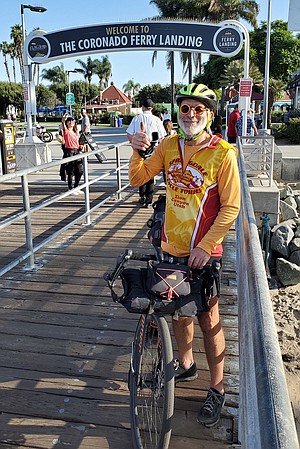 The actual end came at the border. He insisted on riding through to Tijuana, and it was while he was coming back that he faced conflicting feelings. “I had the personal exhilaration of completing my goal. But when I was crossing the line back into the U.S., I passed all those people seeking asylum. Our country was so near they could taste it. And yet I was able to pass right on through. It was bittersweet.”

His plans now? “I’ll be running in my 20th Boston Marathon in April. And perhaps riding the Cape Epic in South Africa, what they call the Tour de France of mountain biking. Other than that, I’m waiting to see what the universe has to offer.”

I want his life. Advice? His answer’s straight out of a Gap ad, but honestly come by. “Be awake to the gift of the moment,” he says. “And I want to ask you a favor: email me when you do something that’s out of your comfort zone. And send a picture to prove it!”