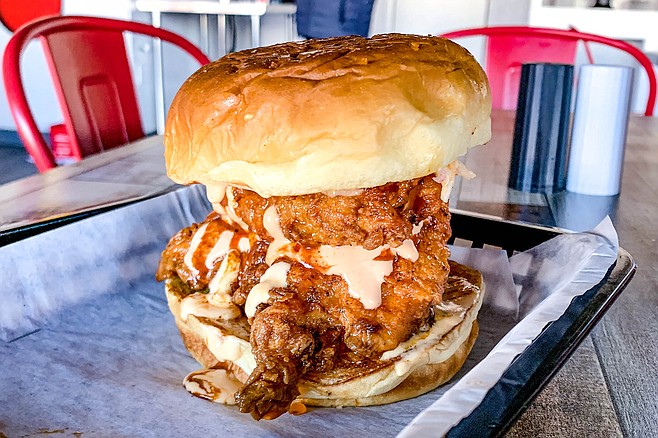 FireBirds Chicken is hot out of the gates

For a restaurant in City Heights, FireBirds Chicken has come up a lot in local foodie conversations over the past three weeks; especially surprising because that’s about how long the place has been open. There’s a good reason for this instant notoriety, and it has everything to do with the national popularity of Nashville Hot Chicken. Which is to say, with the internet popularity of hot chicken.

The spicy brand of buttermilk brined fried chicken has been a go in Nashville since the 1930s. It’s been long known and celebrated around the South, with copycat recipes occasionally cropping up in further flung parts of the country. Then, in 2013, the James Beard Foundation recognized Prince’s Hot Chicken Shack, the Nashville eatery credited for first creating the dish, with an America's Classic award. In 2014, the fried chicken genre started accumulating national press coverage; by 2015, it started fully trending, with all the usual web restaurant boosters rushing in with a hot chicken take. 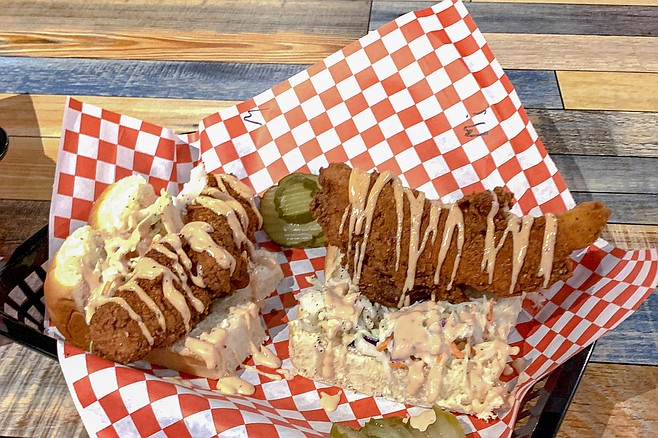 Just like that, hot chicken wasn’t just a thing you made a pilgrimage to Nashville to eat, but something you line up for in your own city. To wit: our nearest and hottest example sees ludicrous demand at its small shop in L.A.’s Chinatown: at Howlin’ Ray’s, a thirty-minute wait time to order Nashville hot chicken means you beat the crowd. People have lined up there so consistently since 2015, you’d think the chicken was being served with free Coachella tickets. 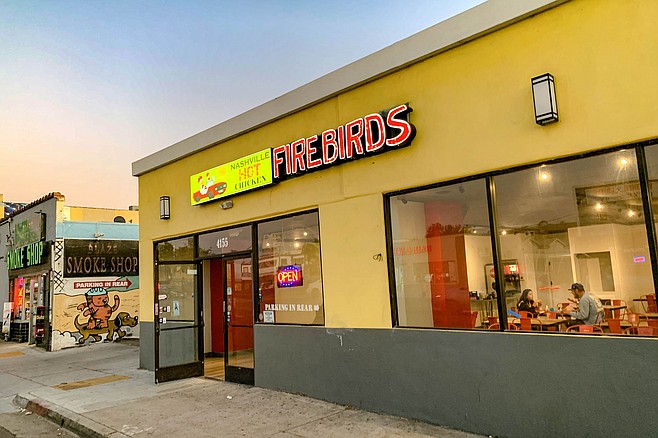 And now, right on schedule, FireBirds shows up as San Diego’s first dedicated Nashville hot chicken restaurant. And people are talking about it. Because if are only two things food-obsessed web addicts can agree on, it’s that fried chicken is awesome, and hot spice is even more awesome. 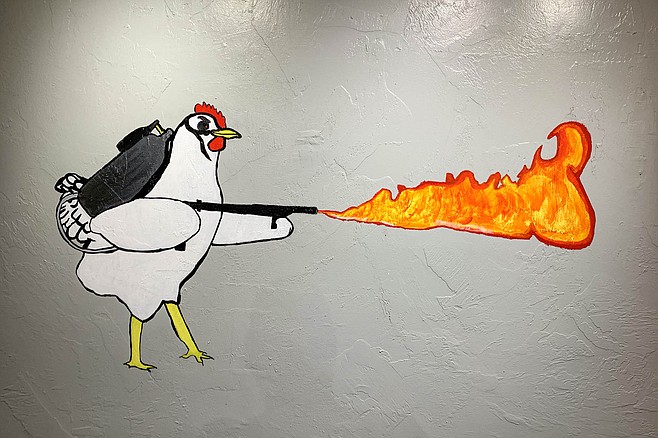 A chicken with a flame thrower at FireBirds Hot Chicken

Given this automatic cachet, I expected something a little slicker than what I found. The young entrepreneurs behind the restaurant plan to turn FireBirds into a West Coast chain, but apparently they’re starting out on a limited budget. Hence the City Heights real estate, and a crude paint job punctuated by murals of cartoon chickens doing such things as driving a red convertible or shooting a flame thrower. 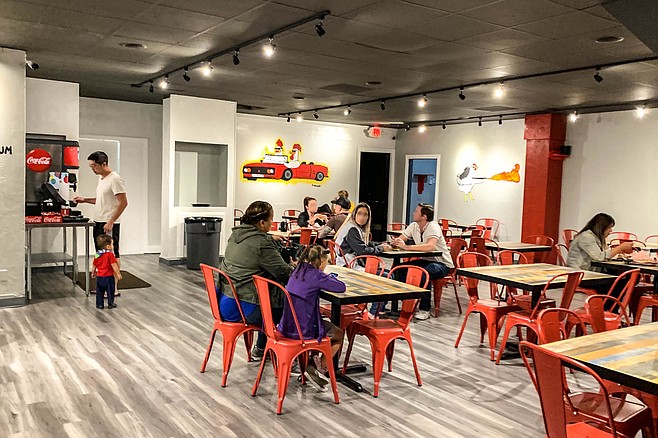 There’s plenty of underdog charm to this unfussy approach, which lets the place more closely resemble the low budget Nashville restaurants that made hot chicken famous than the California fast casual chain it aspires to be.

However, the chicken itself doesn’t so closely resemble the Nashville hot chicken style, which applies its cayenne, chili powder, and paprika spice via a baste of lard-based paste. FireBirds uses a squeeze bottle to dress its chicken with zigzags of an aioli style sauce. I won’t claim this slathering of sauce ruins the experience, but it does change it — part of the appeal of the spicy baste is that it’s supposed to let the chicken’s fried batter remain crispy for, hopefully, as long as you take to eat it. With this approach, you’ll want to eat fast.

Whichever chicken you order, FireBirds lets you choose your level of spice, from mild to hot to “daredevil.” I didn’t find a great difference between medium and hot. There was a bigger jump between hot and daredevil though, as the latter included a second splash of a more traditional looking orange-red hot sauce. It made my order of the restaurant’s Big Ol Sandwich ($9.50) a lot messier, and a good deal spicier. That said, this is San Diego, where Mexican food has trained us to withstand quite a few degrees hotter. If you consider yourself to have a high heat threshold, don’t be afraid to go daredevil for now. I’ve learned FireBirds is preparing to up the ante with an even hotter sauce sometime soon, likely due to tough guys like yours truly finding more pleasure in the bird than the fire.

And, however the above statements sound, there is a lot to enjoy here. Considering the restaurant’s on its wobbly first legs, it’s serving tasty food while it continues to expand and evolve the menu. For example, the two chicken breasts stacking that Big Ol Sandwich to Dagwood proportions, will likely be replaced with a single, large chicken breast. A safer bet is an order of two chicken sliders ($8.50), each of which tops a pair of Hawaiian sweet rolls with chicken tenders and coleslaw. And, like everything Nashville Hot Chicken, there are pickles on it.

(as said above) "Mexican food" "a few degrees hotter" &gt; trouble in SDCounty = that nearly all eateries of such, the 'hot sauce' aka 'salsa' is for drinking. Hence too mild.

It was “ok” I find the “Firebird” sandwich at Crack Shack to be far superior.