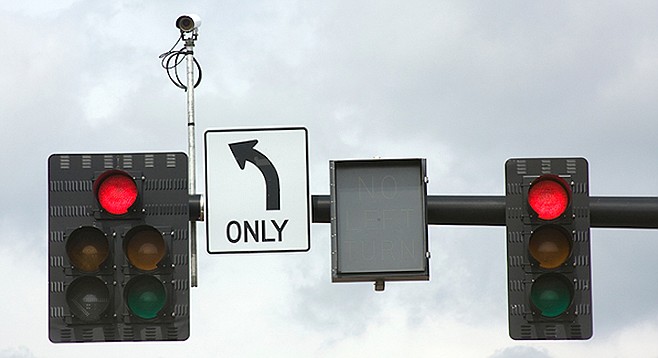 While other cities in San Diego have stopped using red light cameras, a photo enforcement tool meant to reduce accidents, Del Mar, Solana Beach and Encinitas, which installed the cameras in 2004, are keeping theirs.

Two years ago, Solana Beach approved a five-year extension of its contract for camera enforcement; last year, Encinitas voted to keep its two locations, though with a shorter, 18-month contract; and most recent is Del Mar extending its agreement with Arizona-based Redflex for another three years.

It's like adding "a virtual officer" for 24-7, 365-days a year enforcement, a Del Mar staff report said.

But councilmembers have been on the fence about it for years. They questioned its benefits in 2014, and came close to dropping it in 2016, when they hit snooze on their contract to give time for a review by the finance committee.

Jim Lissner, an activist who campaigns against the cameras, bombarding city officials with documents and emails to try to sway their support from the program, sent comments ahead of the fall meeting when the contract was renewed without discussion, saying the topic hadn't been addressed since 2016.

"I cannot find any mention of a review by the finance committee," he said, referring to the staff report, which he also said failed to include "any review of safety statistics," except those from the meeting three years ago.

From the start, traffic enforcement was a high priority in Del Mar's Vision 2020 process, which advocated a more walkable city.

But throughout the county, murky statistics, costs to review video data, which is done by cities – requiring sheriff time – and lackluster results have been given as reasons for removing the cameras. San Diego and Escondido abandoned theirs in 2013, followed by El Cajon. Poway and Oceanside did so in 2014. Vista began removing them in 2016.

But did the cameras reduce accidents in the cities that scrapped them?

Studies by the El Cajon police found overall citywide reductions in collisions when the cameras operated. Before taking them down, the city tested a six-month trial shutoff. Ten cameras had been placed at seven intersections in 1996. Would their absence after so many years wreak havoc? There were three more crashes – which police considered statistically insignificant.

Poway installed cameras at three intersections in 2005 and took them down in 2014. A city report showed that during their use, the worst type of collisions, broadside, were reduced by half. Less damaging rear-end accidents increased eight percent; likely due to ticket-fearing drivers slamming brakes.

Vista also claimed success. Crashes caused by red-light violations reportedly went down 57 percent when the program was in place. But only two of five councilmembers voted to keep it going.

In Del Mar, it hasn't always been a moneymaker. The city paid $56,790 per year to rent the cameras; the cost for a sheriff to review photos added $39,000. Ticket revenue usually exceeds costs, but not every year. Under California law, a ticket can only be issued if there is a clear picture of both driver and license plate, which older technology didn't always yield.

Sheriff's safety data in 2016 showed only a modest drop in accidents.

Councilmembers at the time referred to it as a pilot program that hadn't been very successful, and was at best, moderately beneficial.

Red light cameras are a boon to the manufacturer. The cameras are leased and usually maintained by the camera owner. Ticket revenues are split between the state, courts and issuing city. In reality very little revenue is realized by the city. Targeted enforcement has a much more dramatic effect on traffic crashes.