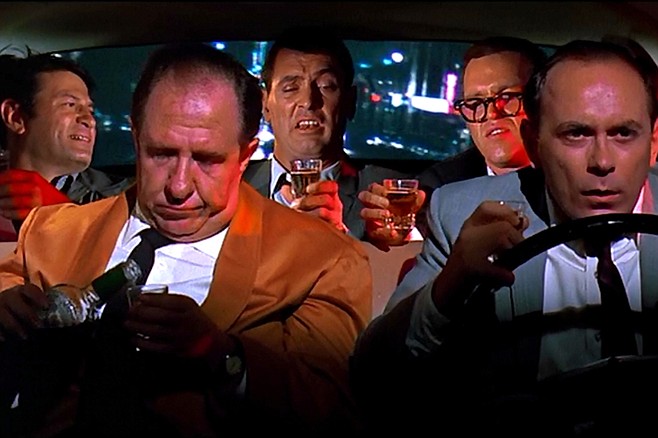 More alcohol consumed than at a fraternity hazing

Once upon a time, movie alcoholics had a name, and that name was “funny drunks.” This week’s politically incorrect offerings put a spigot on two booze-enhanced works of art before uncorking one mean drunk of a movie.

Father of the Bride trailer

The camera glides across the spoils of what appears to have been a drunken bacchanal — more alcohol consumed than at a fraternity hazing — as opposed to merely the aftermath of a middle-class wedding party. Here’s a fun drinking game. Match the families of the bride and groom one sip to their every glass, and you’ll be seeing double by the second cue mark. Many no doubt remember the film’s rubber-floored nightmare sequence, but that Dali-designed swatch of surrealism plays like documentary realism when compared to the disproportionate amount of alcohol consumed by the prospective in-laws. When the Banks (Spencer Tracy and Joan Bennett) and Dunstans (Moroni Olsen and “Good Witch” Billie Burke) meet, the menu consists of wine, martinis, and a post-dinner snifter of brandy that’s almost as big as Tracy’s head. Unlike the Banks’ residence — where there are decanters and ice buckets on every flat surface — at the home of their future in-laws, the good stuff isn’t readily available. Wait until you see the mini-bar concealed in Papa Dunstan’s side table. It’s topped only by the look of envy in Stanley’s eye. And it’s all played for sentimental laughs! I sure hope the “cancel culture” doesn’t catch wind of this Vincente Minnelli classic.

Two musical masterworks were made back-to-back in 1957: the Paris-based Richard Avedon biopic Funny Face and the Cedar Rapids-situated The Pajama Game. Produced by two separate studios (Paramount and Warner Bros., respectively) and shot by two different cinematographers (Ray June and Harry Stradling, Sr.), the look of both films couldn’t be more similar. Credit director Stanley Donen, still operating under Avedon’s spell, for borrowing a heaping helping of the fashion photographer’s neon-infused interiors and soft daylight exteriors for this romance between a newly-appointed superintendent at a small town pajama factory (John Raitt) and the Union leader (Doris Day) he faces off against and eventually falls for. This time, the drunken culprit is plant manager Eddie Foy, Jr., and it isn’t a steering wheel that he’s behind, but a knife throwing act that the ex-Vaudevillian dusts off to amuse employees at the annual company picnic. The result is an inappropriately uncomfortable moment, wIth Day as the designated “lady with the apple on her head.” In this case, Foy’s handiwork would have been just as nerve-wracking had the slings originated from a cold-sober hurler.

The titular good turn has nothing to do with loaning someone a few bucks or securing a pair of theatre tickets. Try this one: an opposing lawyer (Charles Boyer) admires the manner in which manly (and guilty as hell) defendant Rock Hudson wins a case by seducing an attractive female judge. So much so that he asks the rascal to marry and impregnate the “spinsterly” 30-year-old daughter (Leslie Caron) he hasn’t seen in 25 years. (I can’t make stuff like this up, folks.) While en route to have it out with Caron, he runs into an angry hack (Larry “You Talking To Me” Storch), who suggests an instant fix for Hudson’s romantic problems: “Belt her!” A quick pub crawl later finds the cab awash with misogynists, played by familiar faces Stafford Repp (Batman’s Chief O’Hara) and George Furth (Blazing Saddles’ Van Johnson). Meant to elicit laughter, it’s difficult to imagine a time when the image of five Muthas For Drunk Driving converting a cab into a bar on wheels was ever deemed acceptable, let alone funny. Directed by Rock and Doris auteur Michael Gordon (Pillow Talk, Move Over Darling).

Okay, so WHERE are these playing locally???