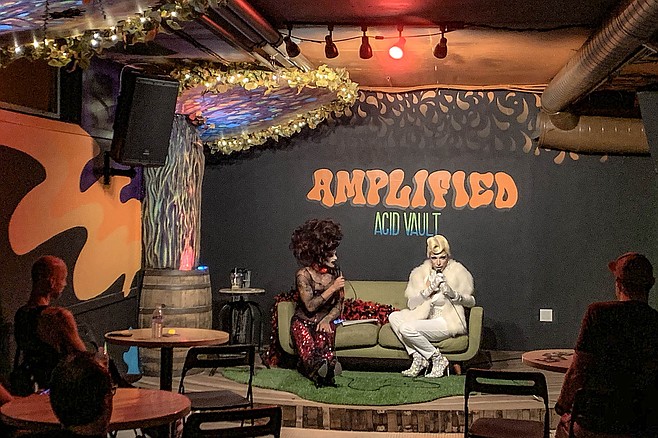 The Acid Vault was supposed to be a place for barrel aging beers to sour. At least, that was the original plan when Amplified Ale Works took over the space overlooking Fault Line Park last summer. Most of the action continues to take place in that indoor/outdoor restaurant venue that offers coffee, pizza, döner, and a full bar is complemented by a beer tasting menu. However, the basement storage space earmarked for barrel storage was recently transformed into something else entirely: a speakeasy-style performance venue.

“It was just storage before,” says Aubree Miller, “It was a cement box.” The marketing professional has been working as Amplified’s de facto creative director since it opened, producing the brand’s visual identity including beer label art. Her work on the new venue resembles something out of Through the Looking Glass meets the forest moon of Endor. Surreal trees with gnarled bark and psychedelic foliage line the walls. A short, raised stage at one end is cut to resemble the cross section of a tree stump; a bar at the other end served Amplified beers. 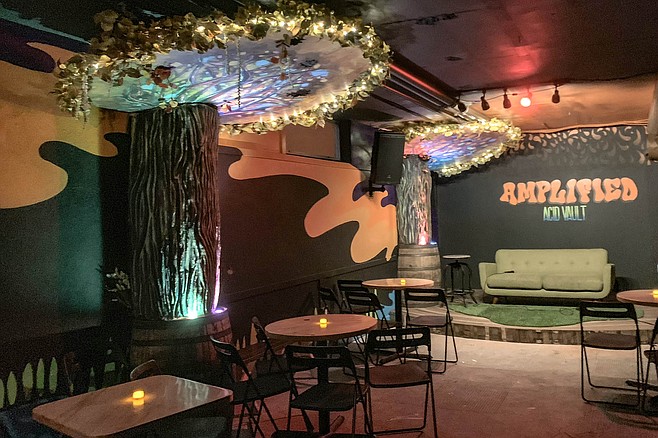 The Acid Vault debuted during Comic-Con, with a secret, fan-club-only performance by British songwriter Tatiana DeMaria, and Miller hopes to book similar fan club music events in the future, in keeping with Amplified’s rock’n’roll lifestyle brand. However, the 60-person space has already been adopted as a home for a number of events featuring spoken word performances. Tuesday nights feature a weekly poetry event by Poet’s Underground, highlighting performing local poets. The comedians behind the Riff City Comedy shows have established a monthly stand up night to host touring comics. And noted San Diego diva Vivvi the Force has launched the monthly drag queen talk show, State of Mind, interviewing local drag performers about how they developed their stage personas. 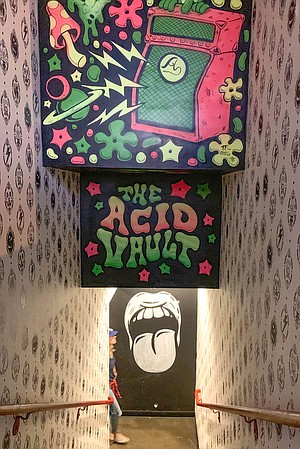 An underground arts venue doesn’t sound like a typical brewery move, but Miller says Amplified wanted to offer East Village more than just a place to go out to eat and drink. “We have 20 thousand residences within a mile radius,” she points out, “so the whole idea is to give the neighborhood a place to come together culturally and have different creative people meet each other, and coexist, and make different ideas. Kind of the same way that we collaborate with beer.”

Due to the small size of the space, marketing for events will be limited; Amplified customers drinking and dining upstairs might not even be aware a show is taking place unless they head downstairs to look for it. But should they find something interesting taking place, their pints and plates are welcome.