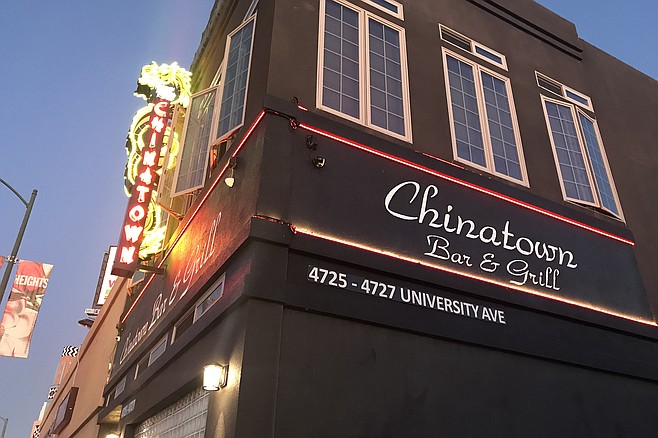 I’m up near Euclid, on University. Looking round, choosing the place that’s gonna fill my belly. Ethiopian? Cambodian? Mexican? Chinese? I swear. This underrated neighborhood has just about any food you could ask for.

At the alley after 47th, I come across this black building with a Chinese dragon neon sign I swear I’ve seen before. Oh yes! Outside Jimmy Wong’s Golden Dragon Restaurant in Hillcrest (now Asian Bistro). This one says “Chinatown.” Not only that, but the top of the building has a flourish that looks straight out of Shanghai.

Kind of dive bar-looking. And yet it all feels new. Above, on the second floor, elegant windows open out and look down on you. 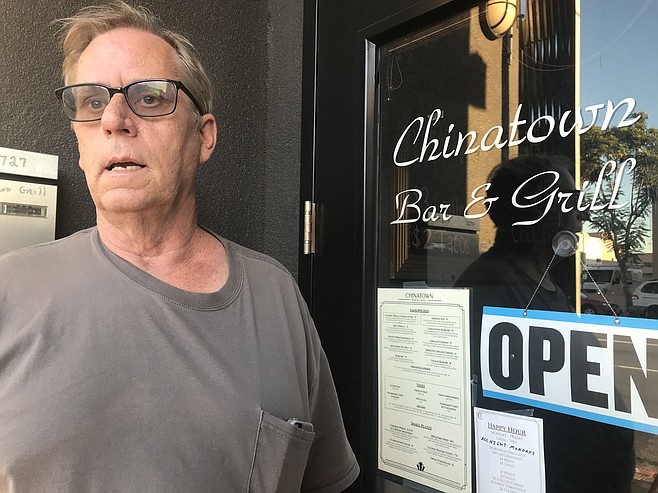 So hey, “Chinatown Bar and Grill?” Chinese grill? Sounds like we’ve got to investigate. I haul one door open, blink a lot until I get used to the dark. And hey hey! Lots of booths on the left, long bar on the right, a huge backboard of green and gold-lit bottles. Lot of whiskey, mezcal, I notice, and a nicely sparky barkeep, Maja (“Pronounced ‘Maya.’ I am from the town of Pula, Croatia”) behind the bar.

I mean, it’s a bar, giving off a dive bar vibe, except it’s too classy. I sit up to the counter and ask for a lemonade (working tonight), and then check the happy hour specials. Ooh, $2 tacos, $3 cheese (whatever that is), $5 fried tomatillos, $6 “tachos.”

But hold your horses. Where’s the Chinese nosh? 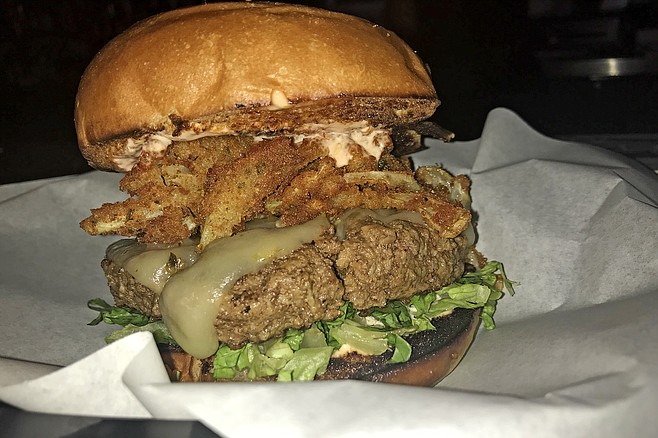 TF Chinatown burger. Umami, all the way through

“The name’s more like a tribute to the area,” says this gent nursing a beer two stools down, “to places like Chinatown Plaza across the road. I just wanted to make this a bar of the neighborhood. There’s been one here for most of the last 100 years.”

He’s Bill Lutzius. The owner. He used to own the still-famous Aero Club Bar on India Street.

“You don’t see many new ones like this,” I say.

“That’s because most small neighborhood corner bar owners can’t afford to keep going,” he says. “As soon as a new landlord takes over, the rent jumps, and small bar owners don’t have a chance. Look what happened when they developed downtown. All the neighborhoods’ bars’ licenses were taken and used to create The Gaslamp. At the Aero Club Bar I had been paying $1200. It went up to like $12,000. I got out. Then of course I bought this. Had to rebuild the en-tire building. Just about ruined me. But I’m from Brooklyn. Stubborn. And hey, I like a neighborhood bar. It has eaten up over three years of my life. And I’m still not making profit. But for some crazy reason, I feel happy.”

I look at his backboard. It has fresh-carved period woodwork. The lights are new but forties style, and the metal ceiling tiles are beautiful. You can see an Egyptian theme running through.

He says go look upstairs. Wow. A beautiful lounge room that makes you feel like you’re in Saigon. Also up there, double-wow! An outdoor garden patio. People eating, chatting, smoking. “You can, up here,” says Bill. Also, expensively-mounted artwork. Pictures of forties stars such as Humphrey Bogart, Lauren Bacall. You can see: The guy has really poured his heart and fortune into this project.

So, tachos or fried tomatillos for app? ”Tomatillos are kind of sour,” says Maja, “but the crunchy batter they’re in makes them really delicious.”

Or tachos? Next time. They’re $6 in happy hour. Dollar more than fried tomatillos. 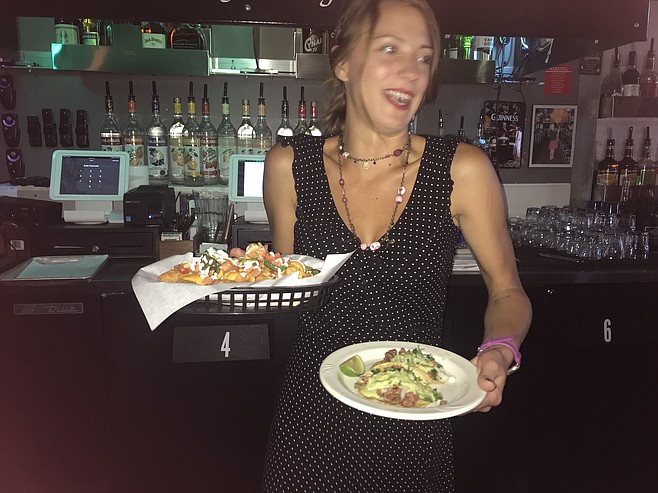 And for mains? They have a bunch of regular-priced food items. Like Philly cheesesteak or French Dip au jus for $9, a toasted brioche of grilled cheddar, Swiss, or pepper jack for $4. Hmm. Brioche. As the menu says: Good way to soak up your beer. Half-pound burger’s $8, and so is the veggie burger, even though it’s only got a 1/4lb “Beyond Beef” patty. The house pork sandwich is $9, with spicy coleslaw and fried onions. Or BBQ pork fries looks good too: Fries with pulled pork on top plus cheddar, BBQ sauce, sour cream. Costs $8.50.

Hmm. decisions, decisions. Then I look at the menu, and there is Cleopatra herself, holding out a big fat hamburger. History is destiny, they say. What da heck, may as well have a burger.

“Have the Chinatown Burger,” says Maja. “It has the pepper jack cheese, fried onions, and aioli.”

Reward Number One: Arturo the cook brings out this plate really loaded with about a dozen tomatillos covered in crunchy batter. And Maja was right. The twang of the tomatillos finds refuge in the nice grunge of their batter.

The burger? It’s big. The great thing about it is the umami flavor goes right through the fat patty. No pink naked taste in the middle. Bun’s toasted, almost burnt, so its edges add carbon to the twang. It’s really good.

Bill may be complaining about business, but now, about 7:30 on a Monday, the place is nicely filling up. Arturo races back and forth from the kitchen.

Outside, the sun has set and the sky paints gentle colors. The hard edge of midday is gone.

And then Bill’s dragon lights up. Ultra cool! I can see how this part of town could become the next neighborhood to pop. “