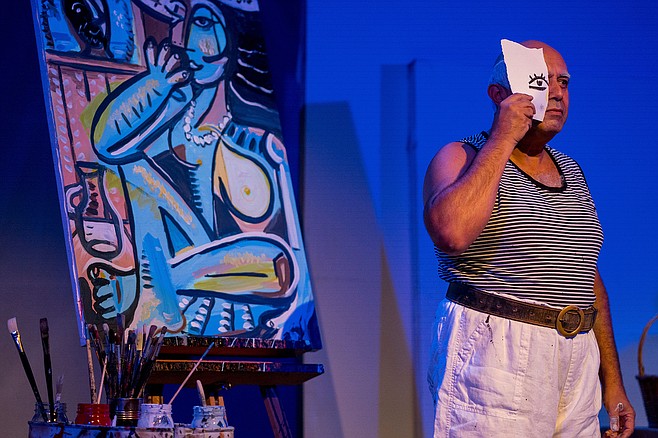 Pablo Picasso: the King of Trash

One of the most charming scenes in this tri-lingual, one-man show comes when Picasso takes the audience on a tour of his cluttered studio, explaining his dumpster-dive art: his late dog crafted out of a small wine cask and a shoe; a two-year-old panettone (an Italian sweet-bread) with a mouse-burrowed labyrinth; a bowling-ball and feather-duster peacock; a bicycle-seat-and-handlebars bull.

I have been given the name, “The King of Trash,” Picasso explains. “It is the gift of metamorphosis.”

Although metamorphosis is a recurring theme, this is not a story with a beginning, middle, and end. It doesn’t take us from Early Picasso to Blue Picasso to Rose Picasso. Rather, it is a series of tableaux accompanied with video images and music. It is shards of light in a broken world, a version of T.S. Eliot’s “Wasteland” that doesn’t require footnotes, sort of “Wasteland for the Masses.”

Each of the tableaux has a point. Not a moralistic point, but a moral one.

Two: “We can send a satellite into outer space, walk on the bottom of the ocean, but painting remains painting because it escapes these investigations.”

Three: “The world today does not make sense, so why should I paint pictures that do?”

Four: “When you throw a ball you hope the ball will reach the wall and bounce back so you can throw it again. You hope your lovers will provide that wall. They’re almost never that wall. The women I have loved are like wet bed sheets hanging on a clothes line, when I threw the ball it just fell to the ground.”

In another vignette, Picasso illuminates the family tragedy that makes God his enemy. In another reference to family, Picasso justifies remaining a member of the Communist Party even after the Soviet Union’s shocking brutality against freedom-seeking Hungarians: “I have joined a family, and like all families, they are full of s*.”

The premise for the show is that the live audience has been paid by his agent to spy on him for the weekend to make sure that he is completing a project due Monday morning. The audience was opening-night enthusiastic, but the premise nevertheless was strained by the ambiguities of when, exactly, the fourth wall was being broken. The moments when it was crystal-clear were electric.

There are times in the script when the monologue sounds more like a recitation from Bartlett’s than a coherent paragraph of thought. But it is a visceral, heart-felt performance. It is, moreover, a fascinating study in art, theater, their intersections, and the creation of both. Anyone with interest in art, theater, creativity, or politics will thoroughly enjoy this thought-provoking show.

The lighting design is remarkably clever, and the soundtrack is subtle yet entirely supportive and essential.

Scriptwriter/star Herbert Siguenza creates art on stage during the production, an amazing feat by a man whose passion fuels this entire production.

I’ll leave you with a Picasso-ism to ponder: “Art is a lie that makes us recognize the truth.”