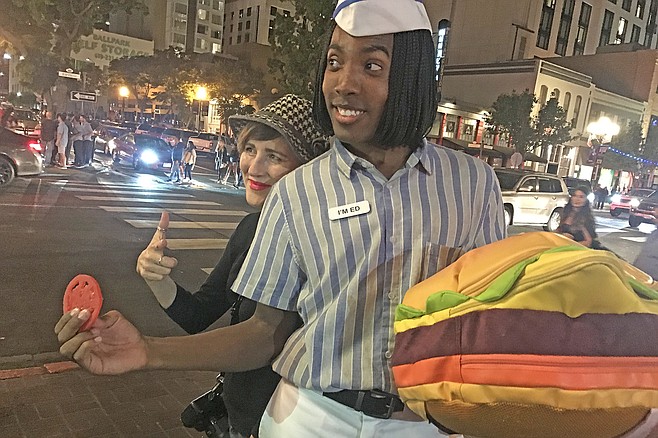 The glorious amateurs of Comic-Con

Where was the heart of Comic-Con 2019? Out on Fifth Avenue, where the glorious amateurs play.

“I am Colonel Richard Ferrel of Her Majesty’s Coldstream Guards at your service, suh!” says this guy dressed in full military garb with a pith helmet on his head, a bazooka slung across his back, and a perfect British accent. “Served in Egypt, ’64. Eighteen sixty-four. This helmet is made of cedar wood. We saturate it in water at night so it evaporates in the heat of day. Keeps our heads cool in battle, don’t you know.”

A girl and her mom come by. “Can she try your bazooka?” 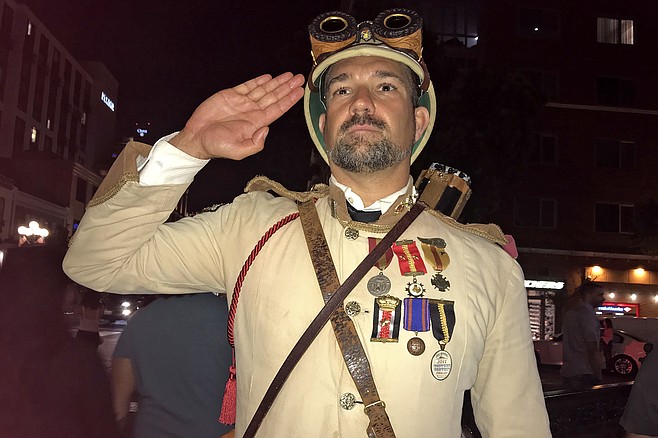 Col. Richard Ferrel, at your service

“Actually,” Colonel Ferrel says, still in his British character, “I used to be a police officer. San Diego. That was until a 300-pound psychotic woman engaged in fisticuffs with me and knocked me out cold. I had to leave the force.”

Three dinosaurs come by, about 10 feet tall. Everybody wants to be photographed with them. But not this one three-year old. He leaps in his father’s arms, howling with fear. Then it’s Hawkwoman, Beetlejuice, and Optimus Prime on stilts, Loki, the god of mischief; Thor; Hela the goddess of death; Sabine from Moulin Rouge; Rin Asougi of the Japanese anime Mnemosyne.

“A guy who enjoys wearing kilts.”

This is a 30-ish gal who’s just seen a guy who looks the spitting image of Ed, the hero of the movie Good Burger and the TV show All That. 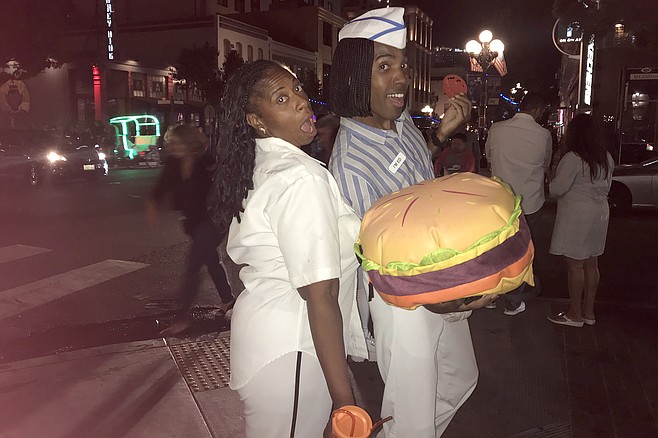 “Welcome to Good Burger, home of the good burger. Can I take your order? Huh!”

“I can’t believe it!” screams this guy. “Can I get a picture with you?”

“Of course,” says Ed. His gravely voice is totally Ed’s. Cheers all round. Selfie after selfie. They may be in awe of the dinosaurs, but they love Ed.

“I’ve met the real Ed,” says Kal Smith. He’s 22, looks 17. “I figured I could do him. I just found the shirt, pants, roller skates. I’ll be him for two days here. Voice can’t take no more. I never break character. They just want to hear me say it. ‘Welcome to Good Burger!’ It’s in my brain forever. There’s no money in this, but I love how everybody smiles. It takes them back to their childhood.”

Across Fifth, a group of boys and girls blasts out with five saxophones. Really good. Dollars drop in their sax case.

Not so much the gal sitting against a wall holding a sign. “Be a hero and help someone out. Me.” 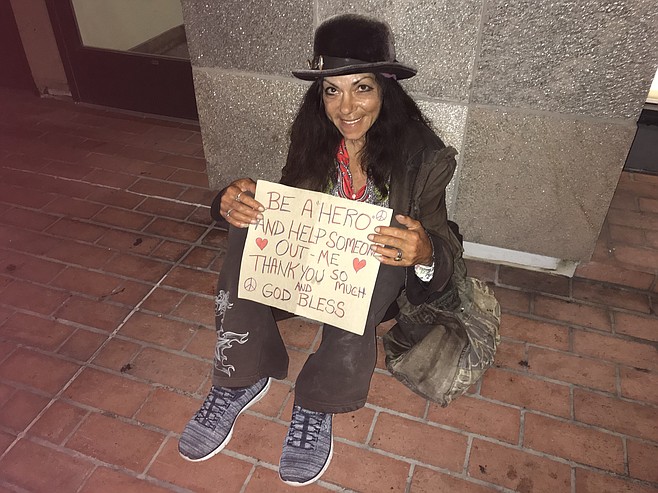 This is not funny - Michelle

Somebody else has pinned up a message. “All my life, I prayed for a voice, so that I could sing for you.”

So no, not sure what went on inside this year’s Comic-Con. But out here was plenty good enough for me.