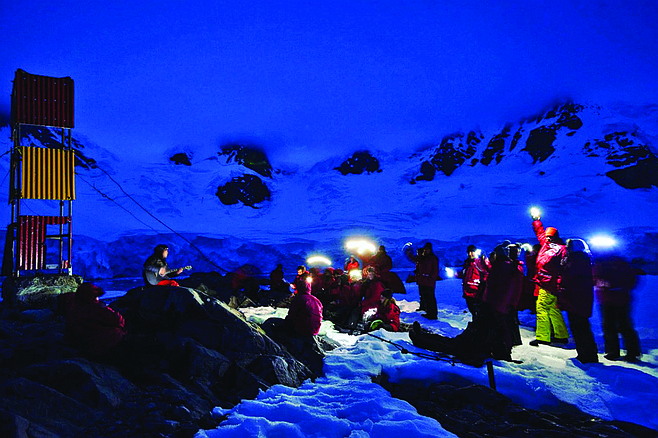 “We zodiaked in to this protected island, surrounded by walls of glaciers and thousands of nesting penguins.”

Pablo Cantua picks up the phone.

“Hey man: Want to play Antarctica? I can get you the gig.”

“Antarctica? Haven’t heard of that bar.”

And so began the greatest adventure of Cantua’s life.

Pablo Cantua is a well-established singer, songwriter, and guitarist who was born in Tijuana and came to San Diego in 1988. He’s been singing professionally since 2001. I meet him at Border X, the brewpub in Barrio Logan, where he’s joining the Thursday night Latin jazz jam.

“Soon enough, I was aboard the Expedition learning how to abandon ship, then heading out to learn the ‘Drake Shake.’ That’s what happens when you enter Drake Passage, roughest stretch of water in the world, between Cape Horn and Antarctica. The ship shakes and shudders and heaves and groans for days.”

He had to sing for his supper. “Every other night I would sing at the Polar Bear Bar on the fifth level. The passengers who could handle the weather were always there.” 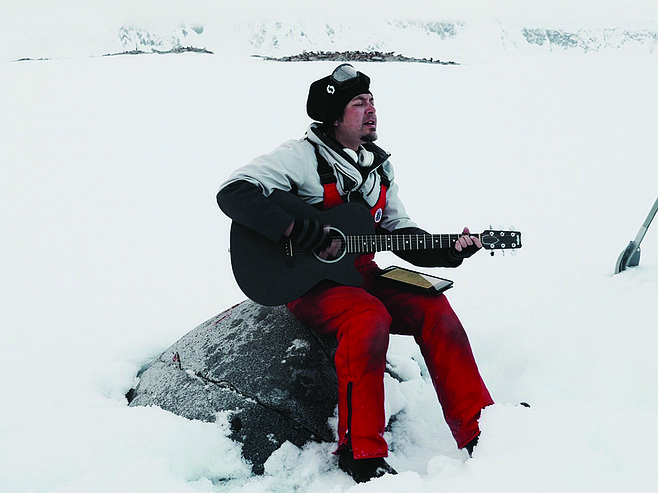 Pablo Cantua sings in Antarctica. Audience of penguins behind him.

“This was aboard the MV Expedition, 132 passengers, 70 crew,” he says. “Apart from singing and playing, I was learning to run the Zodiac boats, and getting trained in rescues and first aid. Because out there, there ain’t no helicopters to fly you out.”

What he’ll never forget is actually singing on the continent of Antarctica itself. “We zodiaked in to this protected island, surrounded by walls of glaciers and thousands of nesting penguins. They were making a racket building their nests. We were camping for the night, about 50 passengers and me, even though the night was still daylight, in the Antarctic summer. It was about 13 below, and no fires, no food, no roasting of marshmallows allowed. International law. I gave the shortest performance of my career. I brought a carbon fiber guitar, because it doesn’t go out of tune. The cold will distort wood. I was sitting on a rock, and everybody was gathered close around, partly because in that total isolation, and cold, you just do.”

“I think I sang four songs before my fingers turned purple. ‘Blowing in the Wind,’ ‘Imagine,’ a Bob Marley singalong, and then a song of my own, ‘Holy Man.’ I think people tuned into a line I have in it, ‘If the clock did not exist, what time would it be?’ Because having day all day and all night, and that landscape, and the group of us like zoo animals being examined by all these curious penguins, and no other sounds, it felt timeless. We settled down into our sleeping bags and tents, and just lay there, listening. It was the strangest moment, but also the most beautiful moment, in my singing career. Maybe my life. I kept thinking, if the clock did not exist, what time would it be? You felt like you were on another planet. When we got back onboard next day, they gave us hot chocolate with Kahlua. A drink never tasted so good.”

Cantua will be returning to sing on another expedition in the Fall, this time heading for the Arctic.