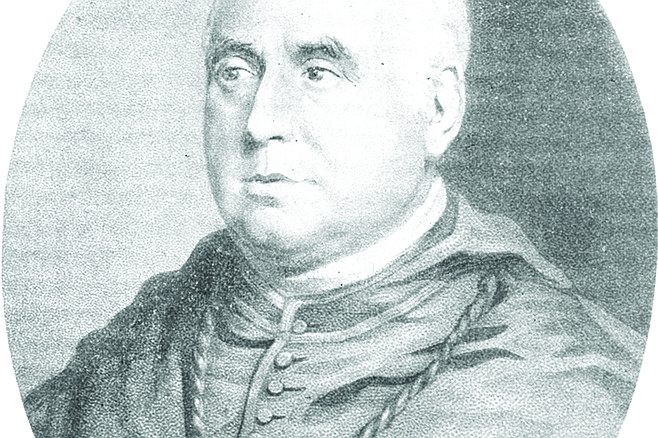 He was often the target of controversialist Bishop John Milner

Christianity is that form of Religion, which was taught and instituted by Christ. It embraces the doctrines of faith, which Christ revealed; the supernatural moral precepts, which he delivered; the sacred rites, which he instituted; and the form of constitution, which he founded, for the government of his Church. Its doctrines are most sublime, and consoling; and, at the same time, most true and certain. Its moral precepts are most pure, and perfect; prescribing the renunciation of all sin, and the exercise of every virtue. Its religious rites are most holy, and salutary, being the divinely established means of offering an acceptable worship to God, and of communicating the graces of sanctification to the souls of men. To those who embrace the Christian Religion with sincerity, and observe its injunctions with fidelity, it imparts peace and spiritual consolation in life, and ensures the enjoyment of a glorious immortality, after death. Christianity is the work of God; a magnificent work, in the establishment and support of which, he has displayed his power, his wisdom, his mercy and goodness, even in a stronger light, than in the creation and preservation of the world. Its end is the glory of God, and the renovation and eternal happiness of man.

– from Christianity, or, The Evidences and Characters of the Christian Religion by Bishop William Poynter

Bishop William Poynter (1762-1827) was an English writer and Catholic bishop, serving as Vicar Apostolic of London from 1812 to his death. He was educated at the English College of Douay and ordained a priest in 1786. He remained at the college to serve as professor and prefect of studies until the college was suppressed during the French Revolution. Poynter was imprisoned by the French revolutionaries for 18 months before returning to England in 1795. Often the target of his fellow bishop and controversialist Bishop John Milner, Joyner absorbed these attacks mostly in silence until he was forced to defend himself to the pope, resulting in the papal silencing of Milner. Before his death, Poynter managed to reclaim the property and some of the funds that the English College of Douay had lost to the French.