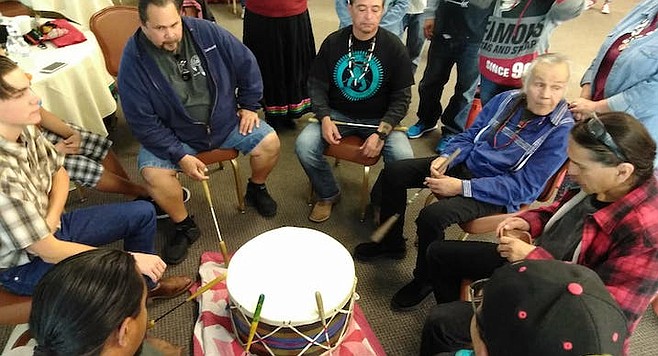 Bobby “Walking Stick” Wallace, national chief of the Longest Walk with the Barona Band of Mission Indians, announced few days ago that his tribe is stepping in to join locals against a sand mining project in El Monte Valley, Lakeside. The Viejas Band is joining, along with other bands from afar that will pack the room this evening (September 25) at 5:30 p.m. when the county will held a public meeting to discuss the plan to dig on almost 500 acres of land.. 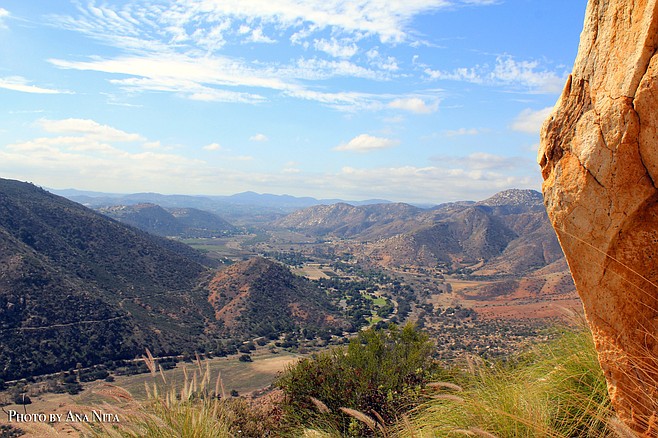 El Monte Valley. “It’s only about the Mother Earth."

The valley is a sacred Kumeyaay land; a place where the indigenous tribes have buried their ancestors and left behind archeological and historical artifacts. They were removed before the El Capitan Dam and Reservoir Lake was built in 1935. The tribe split in two and was relocated in Barona and Viejas and had to start over on a bare land. The people of the Hokan stock lived in these areas for over 10,000 years before Europeans came.

Kumeyaay tribe member Bobby Wallace said, “It’s only about the Mother Earth. We must all stand strong on these types of issues, as one.” Wallace braved rubber bullets at the Standing Rock and states, “This is everyone’s Lakeside. We all need to pull together.”

The sand mining company applied for permit with the county after digging in the valley under the cover of a golf course company. Next steps will be for the public to comment on the subsequent Environmental Impact Report just published by the county before the deadline on October 29. Then it would go back to the county for revision and from there would come to the Lakeside Planning Committee for discussions, but this entity only has an advisory role. San Diego Planning Commission would then take a vote on it, led by chairman Beck, appointed by Supervisor Jacob. Beck was a partner with the sand mining company for almost two decades. He was recently hired for the aftermath restoration. The county supervisors will have the final vote.

Sand is used in every aspect of concrete. If this mining operation is stopped sand will have to be imported from outside San Diego County adding to the already high cost of building homes, buildings, roads, bridges, etc.

There is sand in other places. El Monte Valley is the third largest aquifer in the county. This is a drought state and I don't think it's ok to sacrifice the water for sand. Also, the entire population of SD will be exposed to Valley Fever, a deadly fungus. There are many victims already in the area. Plus thousands of trucks on the roads in a little town would completely paralyze the area. Countless businesses would have to move out of the valley, people's well water will be gone.

This is not the County's property to claim the sand would go to the buildings here. The land owner would most likely export it to China. The land was sold to him for $9 millions and it's worth $2 billions. His company started mining in there illegally 20 years ago. He was rewarded for it with ownership for the whole property.

Please look into this before claiming the sand would even stay in San Diego.

What about the Earth used to build, and covered by Casinos? Tear them down!

I hope you realize that the Kumeyaay were displaced from this valley and their families' bones are still there in burial sites. They were forcefully displaced to Barona and Viejas on bare land and had to start all over. There is sand in other places that would not cause the massive destruction this project certainly would.

Read the EIR: "The proposed project would extract 12.5 million tons of PCC-grade construction sand and gravel over a 12-year period from a 479.5-acre site in the El Monte Valley that includes the San Diego River channel. Mining would occur over 228 acres of the site in four phases to a depth of approximately 35 to 41 feet below the current ground elevation." https://www.sandiegocounty.gov/content/sdc/pds/ceqa/El_Monte_Public_Review.html1 There simply is no way that "reclamation and revegetation activities [that] would begin in year four of the project" will ever make this land whole again.

If sand for construction is so vitally important to some commenters that it overrides any objections based on rights, history, public health, or conservation, then they should have no problem advocating for the sand from our beaches removed for it. Or is something only a problem when it affects white people?

Cassander: Sand for construction is vitally important but rights, history, public health, or conservation should be a major consideration in everything that is done in the construction industry. There are many examples in San Diego city/county of development that was done without regard to the environment etc. All I am saying is that if sand mining was not allowed then it would have to be imported. The largest impediment to affordable housing is the cost of permits.