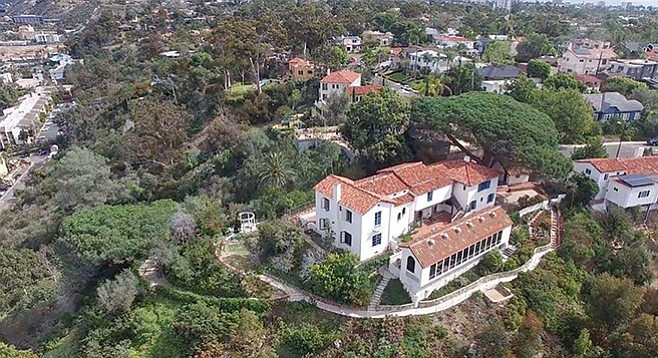 Villa Hermosa, a nearly-century-old mansion overlooking Mission Valley from atop the northerly bluffs of Mission Hills, offers a look at what constituted the pinnacle of design standard in the days preceding the onset of the Great Depression.

Located on a point of land adjactent to a canyon, the villa was constructed in 1924 and is the handiwork of William Templeton Johnson, a noted local architect also responsible for the Junipero Serra Museum in Presidio Park. Johnson’s wife Clara opened the Francis Parker School, still one of the city’s most prestigious private academies, in 1912, and William designed the buildings for the original campus. 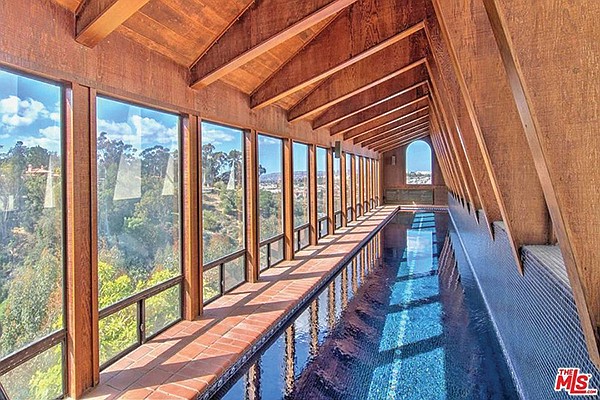 The house sits on 2.66 acres of “park like grounds,” and its hilltop location affords it “scenic views spanning from east to west from the stadium to the ocean.” The property features “multiple level terraced gardens, private lookouts, walking paths, a meditation garden and an Italian marble gazebo.

“The ocean breezes and the presence of a majestic pine tree create a micro climate that makes the property cool even on the hottest of days.”

The home’s design was a precursor to the indoor-outdoor blend of living space that would come to define Southern California luxury, having been “built as the premier entertaining house during the Roaring '20s, establishing the standard by which all new houses would be built in California-style with venues flowing in to patios.”

Classic features include a formal entry/reception hall, a master suite with sleeping porch for relief in the days before air conditioning. (The “air cooled produce pantry/wine cellar” served a similar purpose before the advent of residential refrigerators.) There is a butlers’ pantry with separate sink and food prep areas, along with its own entrance where house staff would accept grocery deliveries. The main kitchen is from the St. Charles company, a firm popular from the 1930s through the 1960s and known for its use of minimalist steel cabinetry that replaced the traditional wood.

The property also includes a detached two-car garage and a small lap pool housed in its own window-lined building. The home’s three fireplaces, along with an outdoor staircase and concrete bench, house one of the home’s unique touches — a “rare 146-piece original Portuguese tile set that depicts the story of the famous novel Don Quijote de la Mancha.”

Inside, the home retains many of its original fixtures, including built-in shelving and hardwood flooring, but a prospective owner should anticipate some renovation and decorating before moving in. They may be able to cover the some of the costs through a hefty savings on property taxes — the home is advertised as being eligible for the Mills Act historical program, “which allows for a 40%-60% tax savings.” You’ll want to check with your accountant to confirm that, though.

The home has been owned since 1996 by the Considine family, an established group of San Diegans operating financial services firms and law offices, among other ventures.

Villa Hermosa has been in search of a buyer since mid-2017, when the property initially commanded an asking price of $2.8 million. That price had been reduced to $2,495,000 by July, when the property briefly entered escrow. That transaction appears to have been cancelled, and the property was offered back up for sale in mid-August with a price reduction to $2,350,000.

Looks like a lot of stair-climbing inside and outside. I didn't see an elevator mentioned.