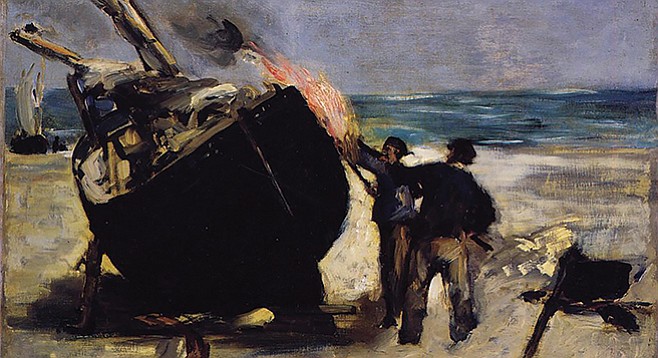 A certain kind of God

A full-body hit of the gorgeous agressions of late 19th and early 20th-century art.

I recently visited the new Barnes Foundation in Philadelphia. It reminded me of the Basilica della Santa Casa in Loreto, Italy, which contains the house in which the Virgin Mary lived and received the annunciation by the Angel Gabriel. Tradition says that in 1291 four angels removed and transported the santa casa from Nazareth to a hillside in Loreto, after stopovers in Croatia and Recanati, hometown of the nineteenth-century poet Leopardi, one of the great speculative secularist minds of his time. In 1920, the Pope named Our Lady of Loreto patron saint of pilots and air travelers. The basilica was constructed as a kind of tabernacle to house the house. Visitors walk through Mary’s birthplace on their knees. 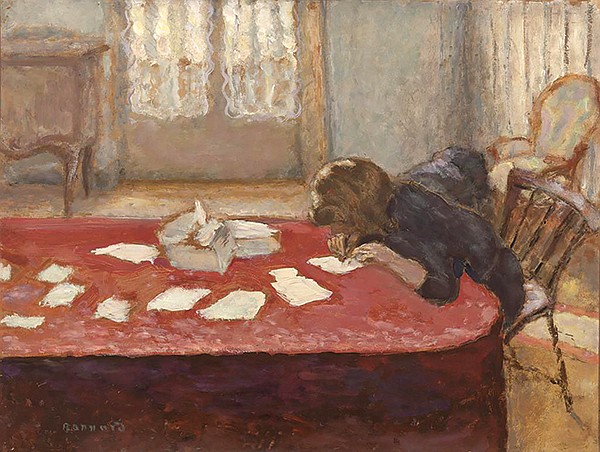 The Barnes is the old inside the new: the new building, clad in irregular rectangular limestone panels, is diffidently sited; not hidden, exactly, but set back from busy Benjamin Franklin Parkway to suggest the discreet, aloof locale of the original Foundation in Merion, a well-to-do Main Line suburb where in 1925 Alfred Barnes, a doctor who made his fortune with an antiseptic called Argyrol that prevented gonorrheal blindness, built a mansion to hold his art collection and serve not as a museum but as a study center for young artists, mainly students from the traditionally African-American Lincoln University, and for ordinary working people who wanted to learn how to look at art. Closed to the general public while he was alive, Barnes decided who got to view the collection. After his death in 1951, the Foundation eventually established visiting protocols based on his intentions: open two and a half days a week, maximum 500 visitors per weekend, two-week-in-advance reservations. When in the 1980s they more or less opened the collection to the public, the good people of Merion objected to the cars and buses that jammed things up on Latches Lane. When Philadelphia made its bid to move the collection to center city, the lawn signs that once admonished visitors and scolded their cars changed to “Keep the Barnes in Merion!” After years of internal discord and sloppy stewardship within the Foundation, the city made a deal to construct a new venue close to the Philadelphia Museum of Art.

The architects Tod Williams and Billie Tsien sheathed a replica of the original Barnes’s homespun interior inside the smart, swift lines of their design. For people who knew the original Barnes, to pass from the sleek, hieratic ante-chamber, with its café, store, kiosks, and other predictable museum amenities to the Barnes replica is to experience the shock of time and to return to a full-body hit of the gorgeous aggressions of late 19th-century and early 20th-century art. The collection’s core is composed of 69 Cézannes, 181 Renoirs, and 59 Matisses. The only quality that subsumes the grand investigations and formal proclamations of these and other artists (Soutine, Picasso, Seurat, Van Gogh, Predergast, many more) is the sublime simplicity of their deployment in the rooms of the mansion. My recollection of Mary’s house and those porter-angels caused me to consider the worshipful-ness, or prayerful-ness, that many feel when looking at powerful art. Some crave or anticipate transcendence. To stand a long while before Cézanne’s Card Players, or Matisse’s Seated Riffian, or Bonnard’s Young Woman Writing (or Demuth’s lyrical circus watercolors, or the anonymous hardware positioned with intent among the pictures, or José Raphael Aragon’s homely devotional paintings on wood) is to be in a certain kind of chapel learning to listen to a certain kind of God — God as origin and master of meaning, source and end of all silence and noise. In our waiting and heedfulness, we are each a church of one. We may be waiting for a picture to deliver us from an atomic reality of limits and definitions, or waiting for an ardent restoration of the world’s physical absoluteness, where physical-ness is its own transport and transcendent state.

Pictures occasion meditation about suffering, boredom, terror, sensuality, jubilation, redemption, and the seasons and hours and years. They occasion thoughts on why we’re there looking at all. We look at them cosmetically, too, for their prettiness and the irrational titillation the prettiness induces. They make us high. It’s not only individual pictures that do this. Barnes (and his friend and intellectual partner John Dewey) believed that the life of forms is the life of the real, that we should see pictures, whatever their materials and dynamics and historical niche, as formal taxonomies of consciousness and conversations across temporal separations. Nearly every wall in the Foundation is crowded with Time and its hundreds of instances. As in the original Barnes, the pictures have tiny identifying frame plates but no stupefyingly gassy wall labels to tell us what we’re supposed to be seeing. Barnes wanted us to see the history of forms as neighborhoods of influence and lines of descent through the millennia, and we’re seeing the millennia happening right now, as a simultaneous convulsive expression of human desire. To ponder what Cézanne called a picture’s réalisation is to experience a strangely articulated intensification of an upfront, right-here reality. The strangeness, or estranged-ness, matters as much as the articulate-ness. Nearly every wall constellates early modernist and old master pictures with the vernacular ironwares, decorations, and domestic tools Barnes loved — doorknockers, firedogs, tin-snips, nutcrackers, cookie cutters, hinges, hasps. The walls compose patterns of form-making instincts and illustrate the recurrent dynamics of the imagination and its aspiration to bring over the life of feeling into forms. The walls are also icons of conversations among artists over centuries. Such pictures of coherence, communication, and continuity provide some consolation in a world of violence and change, ruin and renewal. One can spend hours pondering the unlike emotional registers of blues in Courbet, Renoir, and Sisley; triangles and rectangles in Hartley, De Chirico (who painted Barnes’s portrait), Mondrian, Rousseau. Be not surprised when cruciforms begin to appear, it seems, everywhere: they are routes of fate; they are chance disaster sites; they are sex tapes; they are the Rood and thus sign of cultural sacrifice as essential to revolution and restoration of a renovated order.

I’m a non-believer, brought up Roman Catholic, who lives with a vague, vestigial suspicion of transcendence but doesn’t cultivate a search for it — I’m just a migrant, walking on my knees but usually walking I know not where. When I’m out looking, my passion is to hang out wherever revelation might happen, where the unseen, embedded and squirming inside and rubbing loudly against the seen, breaks forth, enabled by one’s attention and neediness. In collections I’m familiar with, there’s at least one picture I know will restore to me a piercing sense of the imagination’s desire to somehow complete an unfinished world by passionately representing that world-in-process. At the old Barnes, I used to look for the picture I now looked for during my visit to the new venue. In Manet’s Tarring the Boat, two workers are laying a torch to the hull of a beached boat. The fire, its destructive nothingness, is a sheaf of whippy whites and oranges. It looks to be possessed of a life of its own, climbing the hull, almost but not quite beyond control of its handlers, artisans of their handful of chaos. The other elements of sky, sea, and beach, and the two sailors and their enormous boat, are stilled around its upswept vividness. This quickened picture will forever jump on my nerves because of its volatile immediacy, but it’s taken on for me an allegorical meaning, too. The fire has the snappy energy of art of any kind. It’s a fervid phrase or line of poetry. It pictures forth the barely restrained action of the desirous imagination. Its potentially destructive wildness, how it trembles, licks, and spreads, is inseparable from its restorative, fixative process. It’s a dramatizing flash point for what’s occurring in so many of the other pictures deployed in the Barnes’s rooms, or in great lyric poetry, where the shape of expressive energy is the content. I admire and love the burning, its weird intimacy and restlessness.

At the new Barnes Foundation