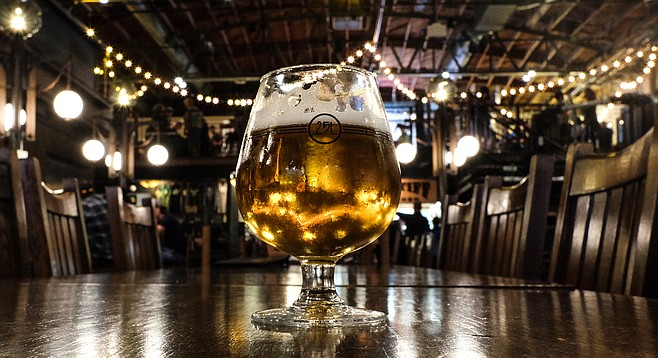 Where will you toast San Diego beer?

It’s that time of year again: San Diego Beer Week. From November 2-11 the local beer business goes all out to celebrate, with special events, special beer releases, and plenty of toasts. The San Diego Brewers Guild has once again led the effort to make a collaborative beer, the Capital of Craft IPA, made at Karl Strauss this year by a crew of San Diego brewers. Taste it, and many other pints over ten days.

Check out www.sdbeer.com for a partial listing of local events, and consult your favorite brewery or beer bar for more. Here are some stand out events to get you started:

The first best bet this beer week is the sponsorship by Lyft. The ride-share service is offering a 20-percent discount to riders attending Beer Week events. When using the smart phone app between November 2 and 11, enter the coupon code SDBW18. The code will work to get you there, and especially to get you home. Since the purpose of these events is to celebrate and drink beer, use the app, enjoy the discount, and keep San Diego’s roads free of drunk drivers.

To kick off the first night of Beer Week, the guild is doing something a different this year. Rather than throw an exclusive opening night party, beer fans are encouraged to start the week off by visiting their favorite local brewery or taproom. At 7pm on Friday November 2, all the brewery locations across the county will formally launch ten days of festivities with a simultaneous Kickoff Toast. Since the point of Beer week is to drink local, night one begins with localized parties all over the county.

Prepare yourself for a week of drinks with a Waterfront Yoga & Beer session at Eppig Brewing’s Waterfront Biergarten at Shelter Island. Get limber at one of the city’s best new drinking venues, then start the day with a beautifully crisp lager.

North Park Beer Co. will host its third annual Beer Nerd Trivia Showdown. It’s the trivia contest San Diego beer geeks were made for, and winners get their names on a plaque, so you know this is for all time.

Election day falls during Beer Week, so wear your “I Voted” sticker to a local brewery, and many will give you a discount.

Each year, Beer Week winds down with its classiest event, The Beer Garden, which returns to the Lodge at Torrey Pines. A curated selection of beers are served on the grass overlooking the golf course, and food pairings specially prepared by 14 top local chefs. Tickets are $85, or $50 for designated drivers. This is one beer fest designated drivers may have a great time enjoying, thanks to the beautiful coastal views and killer food.